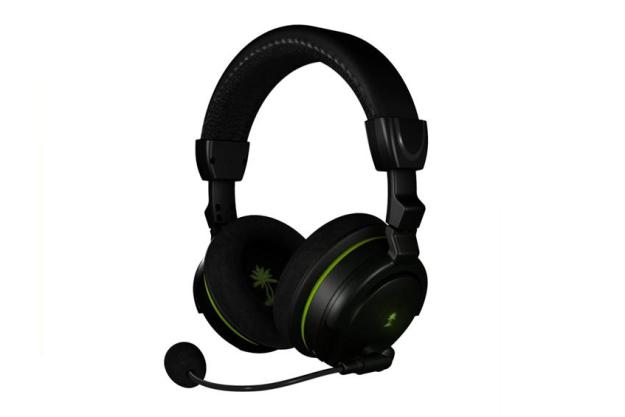 “For those that want a more immersive sound experience, the X42 will deliver that. Just don’t expect to turn your head thinking a zombie is on your tail because, for that kind of realism, a true 5.1 speaker system is still necessary.”

During our evaluation of the Turtle Beach Earforce X32 wireless gaming headset, we learned that great sound can be had from a wireless rig for the reasonable price of about $100. Now, we turn our attention to the Earforce X42 which, for an extra $60, bring Dolby Surround processing to the mix.

Surround sound can enhance gameplay by realistically reproducing directional sound queues. It stands to reason that those gamers who can hear their enemies sneaking up from behind them, or get an early warning on an inbound grenade, have a distinct tactical advantage over those who cannot. We must admit to being a little skeptical, though; is it really possible to get convincing surround sound effects from just two speakers? Turtle Beach maintains that, by using the science involved in how the brain processes sound to determine its location, it is possible. Read on for our take on how well the Turtle Beach Earforce X42 pull off this feat.

The X42 maintain Turtle Beach’s easy-breathing and amply padded ear cups and headband, magnum-sized 50mm drivers and boom-style microphone with windscreen. The controls and connections for this headset are, like the X32, located on the bottom half of the left-side ear cup. There, we find the headset’s power button, Xbox 360 talkback cable jack, effects button and game-audio volume control. Two AAA batteries (provided) get tucked under a panel on the right-side ear cup to provide power to the headphone’s receiver and built-in amplifier.

Though the wireless transmitter for the X42 has to accommodate additional circuitry for digital input and surround sound processing, the transmitter box itself isn’t much larger than the X31’s. This makes tucking the transmitter away similarly easy. Power is fed to the transmitter by way of a USB cable. Just like the X32, the X42 operates on a dual-band wireless system that uses both 5GHz and 2.4 GHz frequencies. Turtle Beach claims this approach makes its headsets less prone to interference from other wireless devices, though our experience with the X32 indicates interference can still be a problem, depending on the environment.

While the X42 can accept an analog audio connection, no analog cables are provided. RCA “piggy-back” cables similar to those shipped with the X32 are available as a separate purchase from Turtle Beach should they be needed. The X42 can even process an analog stereo signal and apply a simulated surround effect. However, the whole point of this headset is its ability to accept a digital connection (optical, of course), decode Dolby Digital surround information embedded in games and movies, then throw the surround information through some processing intended to make surround effects sound realistic from a two-channel system.

In addition to EQ presets for bass boost only, treble boost only and bass and treble boost combo, the X42 offers additional sound customization by way of six different surround angle settings. The idea here is to change the way the headphones deliver sound in a manner similar to changing a speaker system’s physical relationship to the listener. In some cases, listeners may prefer closely positioned fronts and widely placed surrounds while others may prefer a sound that mimics a speaker placed directly behind them at a very steep angle. To change this setting, users will have to take a walk to the transmitter box, but since this seems like it would be a “set it and forget it” option, we don’t see that being a problem.

Like the X32, the X42 aren’t entirely wireless. In order to chat through the headset, a provided Xbox talkback cable must be connected between the control pad and the headset. This cable also provides a mute button for the mic and a control dial for chat volume. That is due to Microsoft though, not Turtle Beach.

To get the X42 transmitter box up and running, a digital optical cable (provided) must be run from the source (most likely an Xbox 360) to the transmitter. For those with newer Xbox consoles, this is a piece of cake since there’s a discreet optical connection on the back of the console. For those with older consoles, a bit more hassle is involved: Either the provided component-A/V dongle must be used or, if an HDMI cable is in use, a separate, smaller audio dongle must be purchased so that it will fit below the HDMI port. Turtle beach also provides an optical digital output on the back of the transmitter so that digital audio can be routed on to an A/V receiver.

A “pairing” button located on the side of the transmitter is intended to get the headset and transmitter “talking” to each other, but we didn’t need to use it. Shortly after powering up the X42 headset, the two apparently paired up without our prompting and audio started pouring from the headphones.

To test the X42, we used a combination of music on a DVD-Audio disc coded in Dolby Digital 5.1 surround, a handful of Dolby Digital 5.1 movie clips on DVD and, of course, Call of Duty: Modern Warfare 3 for a first-person shooter perspective as well as Fallout: New Vegas.

We assumed the X42 would offer the same great stereo sound quality we’ve come to expect from Turtle Beach’s line of amplified headphones and we were not disappointed. A quick listen to some stereo music clips revealed that the X42 performed just like X32 in this regard. By the way: we still prefer bass-boost only and no sound expansion for general music listening.

While we were busy testing stereo music, we had a walk around our home testing area to see how the X42 compared to the X32 in regards to wireless range. We were surprised to find out that the X42 fared much better than our X32 headset did in the exact same test environment. We tested the X42’s wireless range once again at Digital Trends’ HQ and, once again, the X42 performed better than the X32. Add to this evidence the fact that the X42 did not generate any buzz in the left earphone as the X32 did, and we found ourselves wondering if there was some sort of difference in the wireless technology built into the two headsets. We checked with Turtle Beach and were informed that the transmitter for each model is exactly the same. It is possible that the X32 review sample we received was defective, so we will be revisiting that set soon.

There’s no doubt that the surround sound processor in the X42 does something and we’ll even go so far as to say that it does add a more immersive, three-dimensional feel to the gaming experience, but what we were hoping for –easily locatable sound queues within a 360-degree soundfield– isn’t exactly what we got.

We did quite a bit of self-sacrificing during a multiplayer session of COD: MW3 in order to place ourselves near –and hover around– statically placed noise-makers. At one point we paid a visit to the chickens on the Bootleg map and had a little fun dancing around them. It may sound ridiculous (it sure looked that way, and we got plenty of laughs on chat) but the idea was to spin 360-degrees around in proximity to the chickens in order to gauge how well we could locate them in space. The test revealed that we were able to make out the chicken clucks as being either directly in front, to the left or to the right of us. But when the sounds came from behind or any variation in the rear 180-degrees, it just didn’t sound that way. It sounded as if they were on both sides…maybe in front of us.

Further testing with games, music and movies reinforced our experience: the 90 degrees of soundfield from 0-90 degrees and the last 90 degrees from 270-360 degrees sounded very smooth. It created this wide arc of sound within which we were able to pick out sounds from distinct locations. However, there was little to no distinction between what was happening in front of us and what was happening behind us.

Distinction between front and back is a crucial performance point when it comes to true surround sound. But any time you are dealing with a two speaker setup, be it a sound bar or headphones, any “surround sound” you get is going come from processing designed to simulate surround. As impressive as these simulations may be, they are rarely a substitute for the real thing.

In the case of the Turtle Beach Earforce X42 headphones vs. a true 5.1 home theater surround speaker setup, the clear winner is the surround speaker system. You just can’t get true surround with easy localization from a two speaker solution, but let’s not take away from what Turtle Beach has done here: the company has managed to create simulated surround sound that can be handled by a two driver system. While other companies rely on more expensive, less accurate sounding multi-driver systems, Turtle Beach spent its time and resources on processing that delivers similar performance from a less expensive, better sounding product.

For some, the X32 stereo headset is going to be the most sensible choice. For a wireless headset, they sound terrific and considerably enhance gameplay. For those that want a more immersive sound experience, the X42 will deliver that. Just don’t expect to turn your head thinking a zombie is on your tail because, for that kind of realism, a true 5.1 speaker system is still necessary.