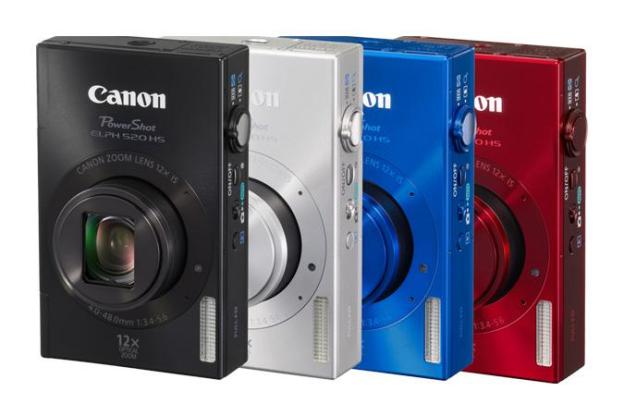 While the G1 X has definitely stolen some thunder, Canon also announced two new ELPH models. The ELPH 520 HS and the ELPS 110 HS will both use the same DIGIC 5 processor as the G1 X, so they should both have high-speed and low light capability in common with the new high-end, fixed lens device.

Both cameras also have improved Smart AUTO technology. A new Face ID feature allows these cameras to recognize up to 12 people and you can actually create profiles for them, including their name and birthday. This face recognition technology works by taking pictures of your subjects at various angles so it can then detect them and fill in some metadata. There’s also an age priority system so that younger subjects get more focus.

While these cameras have a few things in common, the ELPH 520 HS (at top) is the higher-end device. It has a 10.1-megapixel CMOS sensor with a 12x optical zoom, as well as an advertised ISO range of up 3200. The camera also includes Full HD 1080p video record and a 3-inch LCD. And while it will pale in comparison to the G1 X’s burst mode (it has continuous capture at 6.8 fps), it comes in a much smaller and affordable package. It will be available in March for $300.

The ELPH 110 HS is Canon’s new entry-level device, so expect things to be a bit more basic here. The camera has a 16-megapixel CMOS sensor and 5x optical zoom. It’s same ISO range and similar burst mode (5.8 fps) mean you’ll be able to capture comparable quality but your options are somewhat more limited. It will be available in February for $250.

For more pictures , check out our Canon PowerShot ELPH 110 and 520 HS photo gallery.

Best GoPro deals: Sales you can shop today
GoPro Hero 11 Black leak suggests a moderate upgrade
Best camera deals for September 2022
The best iPhone tripods for 2022
How to clean up and organize your photos
This MagSafe iPhone rig aims to give your videos a more pro look
The best selfie apps for iOS and Android
Nikon’s new 800mm lens for Z-mount cameras lightens the load
ReelSteady makes GoPro Player ‘reel’ useful for filmmakers
GoPro takes to the skies with the Hero10 Black Bones
How to turn off the camera sound on an iPhone
24 amazing images of our planet for Earth Day
Instagram test lets you pin particular posts to your profile