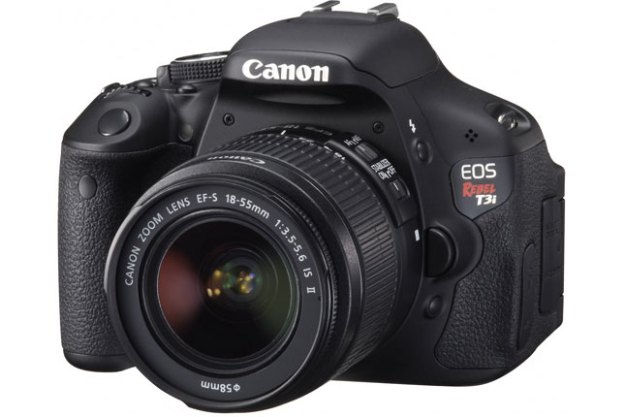 It’s time to really shake off the winter blahs and take some photos and video with the new Canon T3i DSLR. Is it worth the trip outdoors? We charge the battery and find out in our full review below, so read on.

Take a quick glance at the Canon EOS Rebel T3i and you’ll hardly be surprised at its form and style. It looks just like many other entry-level and mid-range DSLRs on the market. Look closely at the back of the T3i, however, and you’ll see one of its coolest features: a 3-inch vari-angle LCD screen rated an impressive 1 million pixels (before you go wild, realize this is pixel count is just slightly more than the 921K of Nikon’s D7000). The key point is its flexibility compared to the Nikon, which has a fixed screen. With the Canon, you can hold the camera over your head or aim low while pressing the shutter. This opens a world of new angles for your photography, and you should definitely make use of it if you buy this camera. At the very least, you can turn it around so the screen is protected as you shoot with the optical viewfinder.

Like every DSLR, the most important feature on the front is the lens mount. In this case, the all-black T3i has a Canon EF mount and accepts over 60 EF-S lenses. Also here is a remote sensor on the very comfortable grip with a nicely textured surface, a 4-pinhole mic, lens release and depth-of-field preview buttons.

On the top is the hot shoe for accessories, which sits behind the auto pop-up flash, the mode dial, power switch, display and ISO buttons as well as jog wheel to make menu adjustments. The shutter is angled on the grip. The mode dial is typical for Canon, with a mix of common scene and manual options as well as a movie setting. The newest is “A+” — Scene Intelligent Auto — which is a souped-up smart auto. Here the camera analyzes the subject in front of it and adjusts Picture Style Auto plus the Automatic Lighting Optimizer, auto white balance, autofocus and automatic exposure. We found it worked well, but there are plenty of tweaks available for Picture Styles once you move out of A+.

The back of the T3i has that great screen and an optical viewfinder with 95-percent coverage and 0.85x magnification. It’s not the brightest viewfinder we’ve ever used, but it’s definitely workable. It’s surrounded by a rubber eyecup and a nearby diopter control lets you adjust it to your eyesight. You’ll also find the usual blizzard of buttons including Menu, Info, Live View, Exposure Compensation, Q, Playback and Delete. The four-way controller gives quick access to AF, Picture Styles, burst/self-timer and white balance. In the top right corner are two buttons to enlarge or shrink the size of your images during playback. Also here is a comfortable thumb rest with a textured finish and tiny speaker.

On the right side of the camera is a compartment for your SD card (it accepts SDXC) while the left has two rather flimsy doors. One gives access to A/V and mini-HDMI outs, while the second has inputs for mics and remotes. The bottom of the Made In Japan DSLR has a metal tripod mount and battery compartment. The camera measures 5.2 x 3.9 x 3.1 (W x H x D, in inches) and weighs 18.2 ounces (body only). For comparison, the popular Editor’s Choice 16-megapixel Nikon D7000 has similar dimensions but weighs 6 ounces more as it has a beefier frame and ruggedized build.

The T3i is a well-designed (for the most part) DSLR that’s easy enough to pick up and start shooting. Mastering all of its intricacies will take time, of course. If you just want to fire away in A+, by all means do so, but it would be a shame not to tweak it.

The camera body and whichever kit lens you choose (our review sample had the 18-135mm stabilized lens). You also get a hefty 324-page owner’s manual, strap, body cap, USB and A/V cables, battery and charger. The battery is rated 550 shots without the flash, 440 using the flash 50 percent of the time, per CIPA. These are solid specs and unless you’re recording video all day long, the battery should survive an extended outing in the field. You also get two CD-ROMs. One is the EOS Digital Solution Disk with Mac and Windows software for editing photos and developing RAW files. The other is the software instruction manual. We charged the battery, loaded a 16GB SanDisk Extreme Pro SDHC card and went on our merry way.

The Canon EOS Rebel T3i has an 18-megapixel APS-C CMOS sensor, the most potent the company offers without stepping into pro ranks like the full-frame EOS 5D Mark II (around $2,500 body only). Unless you’re covering a living room wall with gigantic prints, 18 megapixels is more than enough for most shutterbugs. We adjusted the camera to the highest setting (5164 x 3456 pixels), shooting in RAW+JPEG. Burst mode was engaged (roughly 3.7 frames per second) with grid lines enabled. We attached the supplied 18-135mm zoom, which has the 35mm equivalent rating of 28.8-216mm so it’s fairly wide angle with a bit of telephoto reach. Then it was time to start capturing the first inklings of spring — yes, with even some color from the first crocus of the season. There was plenty of color indoors with cut flowers, orange cats and so on. We also took the T3i into NYC for some touristy night-and-day scenes. Once we made a dent in the 16GB card, we reviewed the material on a 50-inch plasma, made 8 x 10 prints and closely examined the images on the monitor.

Let’s comment on handling before getting into the results. This is an enjoyable camera to shoot. It focuses quickly and has a quick response. It has nine focus points with one cross-type. We hate to mention it again, but our most recent favorite DSLR — the D7000 – -has 39 AF points and nine are cross-type. Granted, the Nikon costs $1,200 for the body alone, but it’s really a much better camera. The T3i’s menu system is easy to follow and since it’s targeted to first-time DSLR buyers, descriptions appear on the LCD to describe what aperture-priority is, for example, when you dial into that mode. Speaking of the screen, it’s great, and although we couldn’t really see the difference between the D7000’s 921K pixels and Canon’s 1.04MP, color was excellent and we had no problems shooting in direct sunlight. The ability to twist the screen as you move into different positions is one of this camera’s great strengths and tops the Nikon.

Our overall impression of the stills captured by the Rebel T3i was a good one. Colors were very accurate including close-ups of orange and purple flowers. Detail was excellent, particularly architectural lines of Manhattan skyscrapers. The 3.7 fps burst mode caught taxis speeding down Fifth Avenue and their yellow colors were spot-on. We did encounter one puzzling situation when you tried to shoot in burst mode in A+ auto — you can’t do it, it’s only single shot. This seems bizarre as most shutterbugs will primarily use this setting. You have to switch to Program AE or another manual-type setting. Noise — or lack thereof — is another plus with this camera. We shot our usual target subject up to ISO 6400 and even at 100-percent blowup it was still useable. In other words, you’ll have few problems taking photos in very low light, as the files were very clean at ISO 800 with more speckles entering the scene as you bumped it up. For the most part, stills get high marks, although the AF system had difficulty with the uneven surface of a flower. Guess there’s a reason you might consider paying more for a more sophisticated system. And in typical Canon fashion, white balance tends to run slightly warm in the auto setting. Results are best if you manually adjust it.

As for videos, regular Digital Trends readers know our stance: DSLRs using contrast phase detection simply can’t focus automatically like phase detection DSLRs and all camcorders. With that complaint out front and center, we have to say the T3i takes high-quality 1080p HD videos at 30 fps. They’re far superior to Nikon’s 24 fps movies. Still you’ll be fiddling with the focus ring to get sharp results and the mic picks up noise from the zoom mechanism. The quality is top-notch though.

We have no problem whatsoever recommending the Canon Rebel T3i. It’s not as robust as the Nikon D7000, but then again it’s $400 less if you opt for similar 18-135mm kit lenses. The Nikon is really geared for the adventurous shutterbug who really wants to dig deeply into the camera’s capabilities. The EOS Rebel T3i is more for the DSLR newbie who wants great picture quality right off the bat, with room to start exploring further, if they want. With its sterling picture quality, eminently usable vari-angle screen and solid 1080p HD videos, you really can’t go wrong.