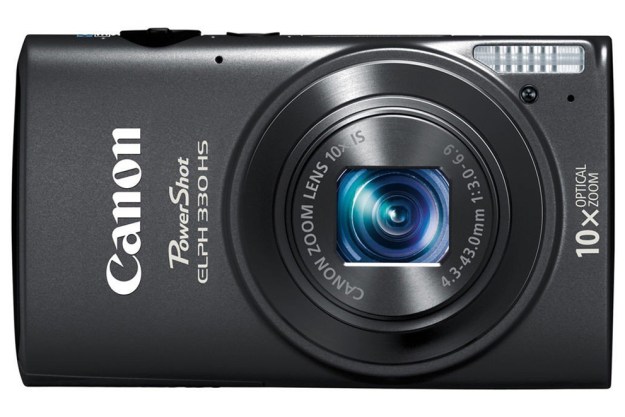 “The PowerShot ELPH 330 HS has a lot of good qualities, but it may not be good enough to fend off smartphones when it comes to casual photography.”

Canon’s ELPH subset in the PowerShot point-and-shoot line has always been known for its compact and sexy-looking cameras, but they go beyond just good looks. They are highly capable cameras that shoot photos with good image quality. With the new PowerShot ELPH 330 HS, Canon has also squeezed in Wi-Fi connectivity. But are these features enough to fend off the rise of smartphones in this ever-shrinking world of point-and-shoot cameras?

Roughly the size of a deck of playing cards, the 330 HS is a compact, lightweight camera with a sleek tapered design and rounded corners (although it isn’t the smallest ELPH Canon makes). Our review model has a nice matte black coating, but you can also pick one up in a shiny pink or silver hue. There’s no denying that it’s a camera when you look at it, but there’s a certain stylish quality that makes it attractive, and it’s easy to toss it into a clothing pocket without feeling weighed down. The plastic material feels sturdy and solidly constructed.

The 330 HS uses a 12.1-megapixel High-Sensitivity CMOS sensor and the DIGIC 5 image processor, which Canon says they’re designed to improve low-light performance. The 10x optical zoom has a range of 24mm wide angle to 240mm telephoto (35mm equivalent), and optical image stabilization. The camera records video up to Full HD 1920 x 1080 at 24 frames per second. Canon touts fast continuous shooting at 6.2 shots per second, but that’s only in the High-Speed Burst mode, which shoots at a low resolution of 3 megapixels; in Program mode, it’s a slow 2.4 shots at full resolution. Another feature Canon touts is the Hybrid Auto mode, which, while you’re shooting photos in full automatic mode, simultaneously records a collection of 4-second 720p video clips that are combined into a longer video (Canon calls Movie Digest). It’s somewhat similar to creating a video using the iOS app Vine, for those who are familiar. ISO ranges from 80 to 6,400. The camera automatically sets the aperture (f/3-6.9) and shutter speed (1-1/2,000 of a second).

The “big” feature in the 330 HS is built-in Wi-Fi. (Don’t be surprised if you begin to see Wi-Fi being implemented into more and more point-and-shoot cameras like this.) To activate Wi-Fi mode, you’ll need to first enter playback mode and then hit the “up” button. From here, you can transmit content directly to another Canon Wi-Fi-enabled camera; to a PC or Mac via a network access point; a compatible Wi-Fi-enabled printer; a smart phone or tablet running Canon’s CameraWindow app on Android or iOS; or Canon’s Image Gateway portal (via a network access point), which you can use to send your images straight to a Web service like Twitter and Facebook. The same gripe we had about the Wi-Fi implementation in Canon’s PowerShot S110 applies here: Image Gateway requires a one-time setup through your computer, which means you’ll also have to register the camera and create a Canon account. This process is actually more convoluted and frustrating than it seems, plus we encountered issues with trying to log into the Image Gateway Web portal (it doesn’t like the Safari Web browser, but is fine with Chrome). We had greater success connecting to the CameraWindow app on our iPhone, however. But compared to, say, Samsung’s approach toward Wi-Fi, Canon’s still needs major polishing.

On the front you’ll find the lens, two microphones, flash, and autofocusing lamp. On the top there’s a speaker, shutter button surrounded by the zoom lever, and power button; an empty space that looks like it could be some sort of large button is actually the Wi-Fi antenna. The bottom is where you’ll find the tripod socket and the compartment for the battery and SD memory card (up to SDXC).

Along the right side is a door that pulls out to reveal a HDMI port, an AV-out/digital terminal (you can attach the USB cable here), and wrist strap mount. A 3-inch LCD (rated 461K dots) dominates the back of the camera. To the right is a cluster of function buttons for video recording (red dot), switching between normal shooting and Hybrid Auto, playback, menu, and navigation (which also double for macro, flash, display, and exposure compensation/Wi-Fi).

As for ergonomics, the 330 HS may be compact but it’s fairly comfortable to hold for one-handed operation – unless you have an overly jumbo-sized hand. With that said, it’s also easy to accidentally drop this thing if you’re not careful, so put that wrist strap on. Buttons are easily accessible.

In terms of navigation, because this is ultimately a point-and-shoot designed for simple operation, there aren’t a whole lot to mess with – don’t expect any major manual overrides. You can shoot in fully automatic mode or program mode, where you can make adjustments to exposure compensation, ISO, light metering, and white balance, just to name a few. If you’re shooting in full auto, the camera is dead simple to operate – just turn on, aim, and shoot. To pick Program or one of the many scene and creative modes, navigating through the options can be a chore. You’ll be tempted to press on the LCD, but, alas, it’s not a touchscreen.

Along with the 330 HS you’ll find the battery pack, battery charger, USB interface cable, wrist strap, “getting started” manual, and a disc containing Canon imaging software and a full manual.

The one thing you’ll notice right away is how speedy the 330 HS is. If you’re wondering how a $200-plus point-and-shoot can be better than a sub-$99, speed is one of those differentiating factors you pay for, in addition to things like build quality, image quality, and other feature. The camera starts up and is ready to shoot in about 0.9 seconds; shutdown is about 1.2 seconds. The autofocusing, which includes face and subject tracking, is also fast and responsive, with fairly minimal lag time between shots.

While auto and program modes are somewhat similar, we set the camera in program for the majority of our shooting just so we can adjust the exposure value, white balance, and ISO, even though the camera pretty much handles everything; we also tried out some of the scene modes and creative filters. In normal shooting our photos generally look crisp and natural, and the image stabilization handled well for the most part, although we also had a few shots that look a bit underexposed and dull, depending on the lighting conditions (a good reason to keep it in program mode so you can adjust the exposure). Point-and-shoots aren’t known for the low-light performance, but many of our nighttime photos camera came out very usable, even at ISO 1,600 with even noise.

Video is incredibly easy to shoot. Just hit the red record button and off you go. Video quality isn’t bad, but it doesn’t look as clean and detailed as the ones we shot with the PowerShot S110. But for casual use, it’s fine. Hybrid Auto is a neat feature in creating Vine-like videos of your day’s shooting activities, but it wouldn’t be something we would use or want to watch on a daily basis.

As mentioned above, we aren’t big fans of Canon’s approach toward Wi-Fi. Even though it only requires a one-time setup with a computer, it’s still a major hassle, especially when there are other Wi-Fi cameras that are ready to get online right out of the box. We had a much easier time connecting the 330 HS to our iPhone 4S, although in the phone’s Wi-Fi setup menu it never indicates if the two devices are connected or not (don’t worry, they are, just launch the app and the phone will recognize the camera). We hope Canon’s next Wi-Fi effort will streamline the process and add features like remote viewing and operation.

Battery life is rated at 220 shots. Casual users will find the battery should hold for more than a week of on and off use, a little less than two days of continuous use before it needs a recharge.

We had a difficult time grading the 330 HS for several reasons. For $230, you’re paying for a camera that shoots good quality photos, is stylish, and is simple to use. However, at the end of the day, it’s still a point-and-shoot, and at $200-plus it’s somewhat pricey for a plain shooter. If your budget allows, we would recommend upgrading to the PowerShot S110, which is better performing, has a variety of shooting modes, and has a compact profile – albeit not as svelte and light as an ELPH.

Five years ago, smartphones couldn’t compete with a standalone digital camera when it comes to photography. In a very short time, smartphones have caught up in image quality. Yes, smartphones still can’t rival that of a digital camera – especially if you want to print out your photos later – but they have become so good that users are happy enough to carry just one device that can do it all. And statistics show that more and more users are using their phones for casual, day-to-day photography, which suggests they are willing to sacrifice some quality for fun features like uploading and sharing to Facebook or e-mailing them friends and family. Cameras like rugged cams, megazooms, and interchangeable lens shooters still have a place, but point-and-shoots like the 330 HS are continually being overshadowed by their distant cellular cousins. It’s hard to justify carrying two gadgets when one can do it all.

For non-smartphone users or those who want a dedicated camera that’s easy to carry around and shoots good photos – perhaps at a party or on vacation – the 330 HS is a good option, albeit a bit pricey. But, looking into the future, with smartphones now accounting for more than half of cell phone users and continuing to rise, good cameras like the 300 HS won’t be good enough next year – smartphones will be the new point-and-shoot. Sex appeal won’t sustain current point-and-shoot models like the 330 HS; it’s time for the ELPH to evolve considerably or die.