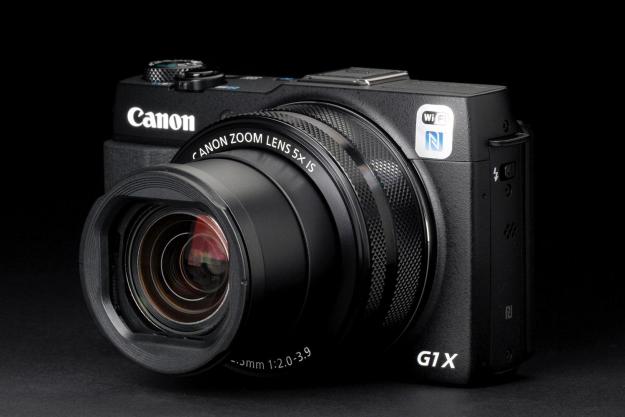 “The Canon PowerShot G1 X Mark II’s photo quality is excellent and videos are improved. We have no problems recommending it.”

With its newest enthusiast zoom digicam, the PowerShot G1 X Mark II ($800), Canon practically went back to the drawing board. And for good reason – the original G1 X was a real disappointment. Hearing the howls of negative feedback such as incredibly pokey performance, Canon unveiled the Mark II with a new chip, processor, lens, design, and LCD mechanism.

At first glance, the G1 X Mark II looks similar to the still available predecessor, but zero in and you’ll notice the porthole for the viewfinder is gone and there’s no jog dial on the front. Instead of a vari-angle LCD on the back, now it’s tiltable. We didn’t find these changes to be onerous and in fact, we like the raised thumb rest on the back of the Mark II. Moving beyond these first impressions, the Mark II has the same basic design themes as the classic G-series such as the current G16 as well the mirrorless EOS M. It’s all-black and boxy, but just like Canon’s ELPH series, the styling is pretty timeless. The Mark II is just slightly smaller overall than the original G1 X (measuring 4.6 x 2.0 x 2.6 inches), tipping the scales at 19.5 ounces with battery and card. Put simply, the G1 X Mark II is built and feels like a brick.

One of the biggest external changes is right on the front of the camera. The Mark II has a faster 5x zoom versus the 4x glass of the G1 X. Now you have an f/2.0-3.9 lens with a range of 24-120mm instead of a 28-112mm f/2.8-5.8. Another change is the dual lens rings. One ring lets you focus while the other changes camera parameters, depending on your shooting mode. Another plus is the built-in lens cover, so there are no worries about losing the cap!

Equally as important are the not so obvious internal changes. The Mark II now has a 12.8-megapixel, 1.5-inch (18.7 x 12.5mm) sensor instead of a 1.5-inch, 14.3MP imager of the G1 X. By lowering the resolution and adding the new DIGIC 6 processor, the new camera is faster, now rated 3.1 frames per second instead of 0.7 (in Live View). We have no problems with losing a little resolution in order to have a camera with decent response (more on this in the Performance section). The fact the chip itself is more than 5x larger than the typical 1 /1.7-inch (7.6 x 5.7mm) chips of enthusiast digicams like the G16 is another major plus since – in theory – the larger the imager, the better the stills.

The fact the Mark II has such a larger chip with a price to match, puts it more in the category of the Nikon Coolpix A, Ricoh GR, Fujifilm X100S, and Sony Cyber-shot RX100 II – enthusiast cameras with APS-C imagers (exception, 1-inch for the Sony). These cameras cost anywhere from $650-$1,100, so the $800 Mark II is not out of the ballpark, price wise. Many of the just mentioned cameras have fixed focal length lenses so they’re definitely not apples-to-apples comparisons, but they do share larger imaging sensors.

The Mark II captures 1080/30p videos in the MOV format, and thanks to the two-channel audio via the stereo mics, your movies will look and sound better on a big screen. Although this video quality is an improvement over the G1 X’s 24p it’s still behind competitors offering 60i and 60p. Hopefully Canon will make the transition for the next generation.

We already noted the Mark II has lost the porthole viewfinder. If you must have one, Canon offers an optional electronic viewfinder for $299. There’s also an on/off button, combo shutter/zoom toggle switch and a shooting mode dial with 12 settings.

The rear is dominated by the tilting 3-inch touchscreen LCD (rated 1,040K dots). It lets you shoot overhead or at waist level, and it even flips upward for selfie mode. The quality is good in most instances but it faltered under very bright sunshine, even with brightness at maximum. There are reflectivity issues as well. If you plan to be out in the desert sun at high noon, be prepared to shift positions – or buy that EVF.

To the right of the screen are a series of buttons and a jog wheel. Starting at the top is the tiny Mobile Device Connection key. You press this to quickly pair the camera with your phone via Wi-Fi (another new feature, along with near-field communication, or NFC). Thanks to the touchscreen there were no issues quickly porting hundreds of images to our Droid 4 with the Canon CameraWindow app (downloadable from the Google Play Store; an iOS version is available via the iTunes App Store).

Nearby buttons include red-dot video, Shortcut, Focus, Metering, Display, and Menu. Within the jog wheel are Exposure Compensation, Flash, ISO, Macro, and a center Function/Set key. They’re straightforward and would be familiar to any Canon owner, and put the camera squarely in the enthusiast camp with access to so many parameters. The right side compartment has a port for a remote, and AV Digital and HDMI outs. On the left is a pop-up flash button, speaker, and NFC tag. The bottom has the battery and SD card compartment.

You’ll find the camera, battery, and plug-in wall charger. You also get a strap and a Getting Started manual. The battery is rated 240 shots, which is an okay rating. You can push this up to 300 by using the ECO power-saving mode, but we found this very annoying since it puts the camera into a modified sleep mode after just a few seconds of inactivity. Unlike years past, relevant software and the full manual can be downloaded from Canon’s website.

The G1 X Mark II is a much more responsive camera than the original G1 X. That one practically drove us crazy waiting for images to be saved to the card. Now the Mark II feels like a normal camera, thanks to the new imaging engine and a 31-point autofocus system. That’s not to say it’s a speed demon, as there’s still some delay between shots, but we had very few focusing issues as we framed our subjects. If capturing fast action is important for you, however, then the Mark II should not be high on the shopping list. But – and this is a big but – if you shoot more static images and those with some reasonable motion, the new Canon is well worth considering. We took some photos of a train ride through the Verde Valley in Arizona and they came out crisp as can be. Granted, the gently rocking train was moving at around 15 miles per hour, but the results were on the money. The lens has optical image stabilization and it was a big help here.

We’ve always liked the natural feel of Canon camera images – colors are accurate without going over the top. The same feeling was true as we reviewed our photos of Frank Lloyd Wright’s Taliesin West museum, Desert Botanical Gardens, ancient ruins, lakes, fountains, and whatever else caught our eye. We would recommend manual focus for really fine close-up detail, as the AF had some difficulty handling thousands of tiny cactus needles with a mountain background. Hey, no camera is perfect but the vast majority of our photos had few issues with focus, color, and detail – just what you want and expect from a $799 large-sensor digicam.

Video quality is much improved over the original G1 X, with good black levels. We shot clips riding through a train tunnel and the camera responded fairly quickly to the dramatic change in light. It handled speedy jet skiers, too, with no problems. And we appreciated the stereo soundtracks. Colors weren’t as spot-on as for the stills, but use the Vivid setting instead of standard color if you want more “pop.”

Just as we gave props for ISO handling, Canon gets an overall cheer for the newly designed PowerShot G1 X Mark II. It is a far superior camera to the original (which should be avoided in favor of this model). Now, for the $800 question, should you buy the Mark II? We have no problems recommending it. Still quality is excellent and videos are improved yet not stellar. It has loads of tweaks for those who want to go there and low light performance is above average. Any Canon DSLR owner should seriously consider the Mark II as their take-everywhere secondary camera, and those looking for an enthusiast digicam – not an entry-level DSLR or CSC – should put it high on the list. The main competition for the Mark II is really the Sony RX100 II; for around $700, it has a 20.2MP 1-inch back-illuminated sensor, f/1.8-4.9 Zeiss 3.6x zoom, faster burst rate, and compact form-factor, and it takes better quality 60p videos. We prefer the Sony, but wouldn’t hold it against you if you opted for the Canon – especially if photo quality is more important to you than video quality.