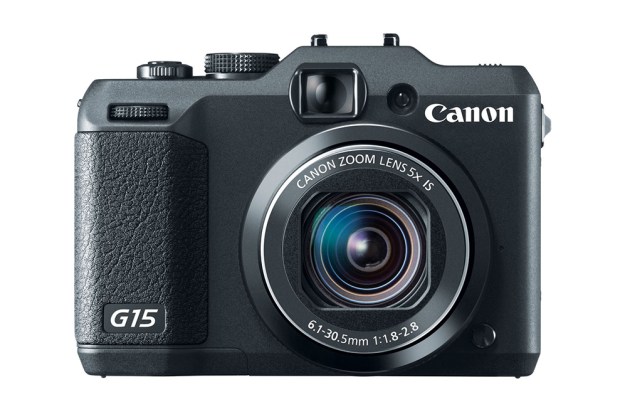 “Although the PowerShot G15 is a good camera, reluctantly we’re getting off the small-chip G-series merry-go-round – especially at its list price of $499.”

The G Series is one of the most familiar of the burgeoning list of enthusiast digicams. Around for more than 10 years, the new G15 retains the design and spirit of the lineup. But at $499, has this type of camera reached the end of the road—especially in a rapidly exploding world of Compact System Cameras?

Built like a brick, the all-black PowerShot G15 has a great feel, with its raised grip and textured surface. One of the few digicams with an optical viewfinder and an LCD screen, the G15 looks very retro, a style that’s even more in vogue (look at the Nikon P7700, FujiFilm X series, Olympus XZ-2, Panasonic LX7, and so on).

From the front the G15 looks similar to the predecessor G12, but on back there’s a radical change. The 2.8-inch vari-angle LCD is replaced by a larger 3-inch fixed-mount screen, while resolution is doubled from 461K pixels to 922K. The camera has definitely slimmed down, so Canon gets thumbs up for that. Many people may feel the lack of a swiveling screen is a deal breaker, as you lose the ability to take shots at unusual angles. We miss it but that wouldn’t lead us to dismiss the camera outright – especially since Canon improved the low-light shooting ability of the zoom lens.

On the front you’ll also find an AF Assist lamp, a jog wheel for menu adjustments, and a release button to remove the lens ring to attach conversion lenses. (We have a question for our readers – do any of you actually use a feature like this?) The top deck has the tiny pop-up flash, hot shoe, stereo mics, mode and exposure compensation dials, power button, and combo shutter/zoom toggle switch. This pop-up flash is another difference from the G12 as that one had a larger built-in flash.

The mode dial is very similar to the recently-reviewed PowerShot SX50 HS with its myriad no-brainer and manual options. The only one missing is the Sports scene mode, due to this dial’s smaller size. Like a LCD display on the top of a DSLR, the exposure compensation dial lets you know this is an enthusiast’s camera (options are +3/-3 EV). This adjustment is used by photographers all the time when they’re in manual modes to fine-tune overall brightness. It’s a habit you should get into as well when you move beyond auto.

Among the key points on the back are the small porthole viewfinder with diopter control and the 3-inch LCD. To be honest, we rarely used the viewfinder as the LCD worked nicely in almost all situations. The camera has a high-quality image stabilization system (Intelligent IS) so there wasn’t much blurring when holding it out front while framing with the monitor. Along with the basic controls, you’ll find a shortcut button to which you can assign a function not handled by camera’s external controls (we chose white balance). In keeping with the times, the G15 now has a red-dot movie button to quickly capture videos. Unfortunately, they’re still lagging at 1920 x 1080 at 24 frames per second (fps). There’s an AF Frame Selector, AE/FL lock, and a four-way controller with jog dial. The points give you access to ISO, flash settings, display, and focus type (macro, normal, and manual).

Drill into the menu and you’ll find access to the built-in Neutral Density filter, a digital level, bracketing, and other advanced features.

On the right side you’ll find remote-in, USB, and mini HDMI connections, and on the left is a speaker. The bottom has a metal tripod mount and battery/card compartment. All in all, a decent set of options for someone looking beyond the basics or wants an easy-to-carry DSLR alternative.

Besides the PowerShot G15, there is a rechargeable battery (rated 350 shots if you use the LCD), a plug-in wall charger, strap, starter guide, and CD. On the disc is the full manual as well as Canon’s age-old editing suite including ImageBrowser EX, CameraWindow DC, PhotoStitch, and Digital Photo Professional for handling RAW files. The camera uses SD media and is compatible with Eye-Fi cards for wireless connectivity. You have to buy your own card, of course, and Class 6 or better is the way to go for this camera.

The PowerShot G15 has a 1/1.7-inch 12.1-megapixel CMOS sensor offering larger pixels than 1/2.3-inch chips found in many point-and-shoots. Although a step in the right direction, the imaging device is still smaller than any Compact System Camera or DSLR, which is something to consider for an advanced camera such as this. It’s not an issue if you are taking images for the Web, Facebook, and Twitter, but if you want really fine quality – especially if you want large prints or to do some serious cropping – you have to go big (sensor wise) or go home.

We set the camera to maximum resolution, RAW+JPEG for stills (4000 x 3000 pixels), and 1920 x 1080/24 fps for video. We took the G15 along to a visit to the Jersey Shore, some nearby locales, and for some holiday cheer. The camera’s 28-140mm focal length is a decent range of wide to tele in its category of enthusiast compact cameras. It didn’t have the ridiculous reach of the PowerShot SX50 HS, so instead we relied on sneaker zoom (physically moving yourself) to get closer to our subjects.

Ergonomically, the G15 is a good camera. It’s got a great heft, the key controls are easily reachable, and the menu is simple to use. Overall, we found the camera took good not great photographs. In most instances the camera focused very quickly but stumbled in low-light, low-contrast scenes; there were definite focusing issues in manual mode. The G15’s type of focusing is handled by adjusting the controller and AF Frame selector. Even though an enlargement window appeared on the LCD, we found it hard to get super crisp focus. It simply didn’t compare to the fine control of a CSC/DSLR lens. And, the camera seemed to overexpose images in daylight (this was remedied by adjusting the exposure compensation a notch or two). This was surprising as we’re generally pleased with the saturation of Canon PowerShots. On the plus side, even though the camera has a smaller flash, our indoor photos were very nicely exposed. The G15 also has a digital level, which is a great plus for keeping your horizons straight.

The impact of the f/1.8-f/2.8 lens was very noticeable when we shot the stage and chandeliers in an old Broadway theater before a show. The combination of the wider lens and somewhat larger sensor made for good results. Canon’s Intelligent IS stabilization system also helped here, as well as in other slow shutter speed, handheld situations.

Don’t expect super-fast burst modes, as this camera is really for capturing still lifes, portraits, and landscapes. When you move out of Smart Auto, you max out at 2.1 fps while shooting JPEGs, which drops to around 1 fps in RAW or RAW+JPEG. Clearly this is not for speedy subjects. Like the SX50 HS, the G15 has High-speed Burst HQ in the Scene modes, which grab 10 frames in a second but focus is locked on the first image and the camera locks up for several seconds as the images are saved to the buffer.

ISO ranges from 80 to 12,800. Our test images taken at the highest level looked more like expressionist paintings than photographs. You can get away with 6400 for the Web, but don’t expect accurate colors or a noise-free image. As you ratchet the setting down, your results will be much better. Still, it was pretty impressive for a small-chip digicam.

The G15 takes 1080/24 fps MOV video clips and they’re good, but not spectacular. Again, for sharing a clip on YouTube via a computer screen rather than a 50-inch plasma, they’re more than fine. Sound is stereo and you can zoom while shooting.

Although the PowerShot G15 is a good camera, reluctantly we’re getting off the small-chip G-series merry-go-round – especially at its list price of $499. We’ve endorsed them for many years but times have changed. Although this is a solid, nicely-featured point-and-shoot, there are now many and much better Compact System Cameras with larger imaging sensors available that are also much more responsive (3-plus fps). You can get an Olympus PEN for $350-$499 (PM1/PM2) or a Sony NEX-F3 for $500. These interchangeable lens cameras are far more capable than the G15, and they’re not that much larger in size. If you’re looking for a camera in this price range, you have many other options beyond those CSCs just mentioned. If you want a truly pocketable alternative to an interchangeable lens camera, however, Canon’s S110 is smaller, more affordable, and has the same imaging sensor as the G15.