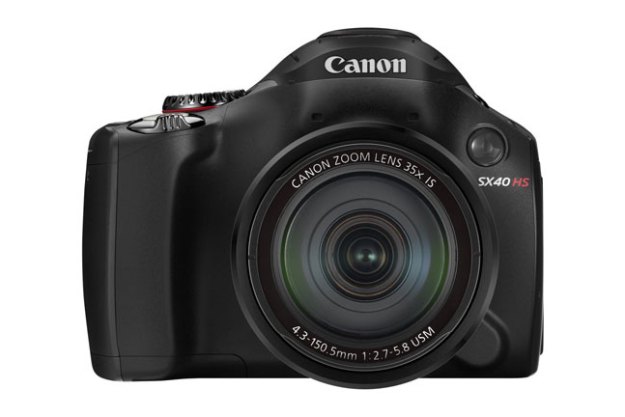 “If you’re considering a mega-zoom, the Canon PowerShot SX40 HS is a slam dunk”

One of our favorite cameras of 2010 — the Canon PowerShot SX30 IS — was just freshened up with a new sensor and imaging processor as the SX40 HS. While a touch up like that is seldom a bad thing, the new model also adds boosts the price even more into the point-and-shoot stratosphere. We gave the new model a shake down to see if the upgrade was worth Canon’s effort – and your extra cash.

The key reason the SX30 IS was such a hit for this reviewer was its mind-boggling 35x zoom. This gives you a focal range of a nice wide-angle (24mm) with a telephoto that extends as far as 840mm. People, you really have to hold this camera and work the zoom to appreciate these numbers. It’ll shake your imaging world — and more importantly, put some sizzle into your photography. We remember shooting a sculler on the Charles River near Harvard with the SX30 IS, taking in the expanse of the water then zooming in so close on the rower as to see the stitching on his shirt. This made us wax philosophical about learning how to photographically “see” all over again. Fortunately, that period of introspection didn’t last too long — it was back to reviewing cameras and camcorders once again.

As part of an inexorable trend, cameras are moving from CCD imaging devices to CMOS sensors. In fact, one of the major differences between the SX30 IS and P500 is the sensors (14.1-megapixel CCD for the Canon, 12.1-megapixel CMOS for the Nikon). CMOS sensors are faster, enhance video quality and have less digital noise than CCDs in low light, one of the reasons you’ve seen this move throughout 2011 in a wide variety of cameras, and it will continue in the years ahead. So guess what Canon did for the new SX40 HS? You win the prize if you said add a CMOS sensor and a new processor (12.1 megapixels, DIGIC 5).

That’s the major difference between the SX30 IS and SX40 HS. Other than a changed logo, the cameras are almost identical, which isn’t so bad as we liked the overall styling and heft of the older model. Changing the chips may have lowered image resolution a bit, but the SX40 HS now takes 1080p videos versus 720p for the older model, plus — and this is a huge plus — the camera now captures 10.3 frames per second versus 1.3 fps for the SX30 IS. Talk about leaps and bounds. Also, the ISO range extends to 3200 instead of 1600, and the camera has a raft of art filters to add some effects to your work. There are a few other changes we’ll get into but first let’s take a tour.

The most dominant feature on the front is the 35x zoom. Also here is an AF Assist lamp as well as a few tasteful logos. Two pinhole stereo mics are neatly tucked under the flash. On the top deck (from left to right) is a flash adjust button, the manual pop-up flash, hot-shoe cover, mode dial, power button and shutter surrounded by a zoom toggle switch. The mode dial has a good selection of options, ranging from Smart Auto, PSAM and filters. Canon slightly reconfigured the mode dial options, taking away the portrait and landscape scene modes while adding filters. We question the wisdom of this, since portrait would be used far more than changing the overall tone of your image. Then again, filters are kind of cool. Fish-eye, miniature, toy camera, monochrome, super vivid and poster really let you experiment. We liked the similar options on the Olympus PEN Mini, so this may the shape of things to come.

The rear of the SX40 HS has the same 2.7-inch vari-angle LCD screen as the older model. This twisting screen lets you hold the camera at different angles, so you can grab different perspectives rather than straight on. The display has 230K pixels, but Canon really should’ve upped the quality and size. Not that it’s bad — it worked fine in direct sunlight — but as a $429 top-of-the-line point-and-shoot, 3 inches and 461K is more appropriate. Like all better mega-zooms, the Canon also has an electronic viewfinder (EVF) with diopter control, rated an OK 220K dots (this should be enhanced as well). The EVF is a critical feature as you really need to brace the camera to your face for the most stable hand-hold, especially when you’re at extreme telephoto. The camera has an excellent optical image stabilization system but even it needs a hand, or preferably two. Then again, a nearby railing, fence or monopod would be even better.

Almost all of the buttons and controls on the back are pretty standard. From left to right is a shortcut button, red-dot video key and the unassuming — but critical — Zoom Framing Assist. This one is a god-send when you’re really zoomed in. Say you’re at 750mm and your subject moves. Trying to reacquire it by panning the camera is very difficult. Press Zoom Framing Assist and the lens backs off so you can quickly find it, then zoom back in by pressing the button once again. You will really love this feature, and we tip our hats to Canon for this great real-world solution. Other buttons include playback, AF Frame Selector/delete, display and Menu. The SX40 HS has the classic four-way controller surrounded by a jog wheel with center function/set button. The points of the controller give direct access to ISO, self-timer, macro/manual focus and exposure compensation.

On the right side is a compartment with mini HDMI and USB outs, while the left has a speaker. The bottom of the made-in-Japan camera has a metal tripod mount and compartment for rechargeable battery and memory cards. The battery is rated a good 380 shots using just the LCD, per CIPA. The SX40 HS accepts all types of SD cards as well as Eye-Fi media. Since you’re recording HD, at least a Class 6 rating is required.

You’ll get the camera, battery, charger, strap, lens cap with string, USB cable, Getting Started booklet and a small bag to hold the hot shoe cover. The supplied CD-ROM has the full 220-page owner’s manual and Canon’s basic software for handling files (Windows/Mac).

After charging the battery and loading a 4GB Class 6 SDHC card, it was time to start zooming…

We had the Canon PowerShot SX40 HS for a period of several weeks. It was early fall, so there were plenty of opportunities to capture strong autumn colors. We also shot many other scenes indoors and out, working our way through the mode dial. The camera was set to maximum resolution (4000 x 3000 pixels for stills, 1920 x 1080 at 24 fps for movies). When done, prints were made, files closely examined on the monitor, and images and movies reviewed on a 50-inch plasma HDTV and a PC.

Before getting into the results, we’d like to discuss the 800-pound gorilla in the room — the 35x zoom lens. Having this capability in a relatively compact package is astounding. In order to have a DSLR with 24mm through 840mm focal lengths would require a veritable carload of lenses that would cost an absolute fortune. And forget about easily carrying them around. The back of an SVU would do the trick, versus the 1.3-pounds of the SX40 HS. The ability to take a nice wide-angle shot then keep zooming for what seems like forever is also great. We shot some images of a waterfront restaurant then zoomed across to the other side of the river to capture a church steeple silhouetted by the sunset. This was nice but when we put the camera down, we couldn’t even see steeple. This is what we mean by “seeing” in a very different way. Basically you’ll discover things you didn’t realize were there. Whether these are great images you’ll want to frame is another story, but this ultra mega-zoom puts it at your fingertips.

Now we love caffeine as much as the next person, but we highly recommend decaf when shooting extreme telephotos with this digicam. Although the SX40 HS has lens-shift optical image stabilization, you’ll need arms of steel to get a really sharp shot at 800-840mm. Even though Canon enhanced the OIS so the camera chooses between six types of stabilization — depending on the scene — we suggest you rest the camera on something solid like a fence for best results. The SX40 HS has many features, but it’s not a miracle worker. We don’t want to turn you off, but just be prepared. As noted, the Zoom Framing Assist, is a true blessing and you’ll use it more than you imagine; we certainly did.

One of the key improvements to the SX40 HS is its speed, as it can grab 10.3 frames per second for eight shots at full resolution. Although you have to set the camera to high-speed burst from the scene options, this is an excellent tool when you know you’re shooting action. The “normal” burst setting is 2.4 fps — a decent spec — but to really capture movement, opt for automatic-weapons level. The scene modes are fairly standard, but there is one that’s the direct result of the CMOS sensor — handheld night scene — that combines several frames for increased dynamic range and less noise. It’s for static subjects but the quality is really good.

As Digital Trends readers know, we’ve generally like the overall “feel” of Canon images as they have nice pop and color rendition, especially their better point-and-shoots (the low-end like the $89 A800 is another story). At $429, the PowerShot SX40 HS didn’t disappoint. Images were uniformly good with spot-on colors. Shots taken down the Jersey Shore were very lifelike including the old Asbury Park Convention Center and nearby landmarks like the smiling “Tilley.” No need to be repetitious, but you’ll be very happy with the results. We took a burst of speedboat going 100 yard offshore and were amazed to see two guys sitting on chairs in the shadows when we enlarged the frame 100%. This occurred many times when we closely examined the photos. In case you haven’t noticed, we really like this lens. We also had fun using some filters as sunset including monochrome and super vivid. Filters aren’t the only reason to buy this camera, but they’re a fun tool.

The move to the CMOS sensor and new processor helped corral digital noise at high ISOs. The SX40 HS has a maximum setting of 3200, which is very reasonable given newer cameras offering 12,800 and 25,600. We found noise was very much under control, even at 3200, which bodes well for shooting in low light. We took one shot of a garden at night using program mode, as well as one in handheld night scene mode. Handheld was a bit better, but both were more than acceptable.

The videos didn’t match the quality of the stills, however. The SX40 HS captures 1920×1080 24 fps MOV files. Oh, the colors were fine, but they were a bit jerky compared to the 1080/60p clips we recently shot with some newer Sony cameras. That comparison is a bit unfair, but we just wanted to keep things in perspective.

If you’re considering a mega-zoom, the SX40 HS is a slam dunk. We can’t be any clearer: If you’re in this neighborhood, buy it. The camera takes fine photos, is loaded with nice features, has cool filters and takes quality movies. And, oh that lens. Just ease up on the caffeine…

The best iPhone tripods for 2022