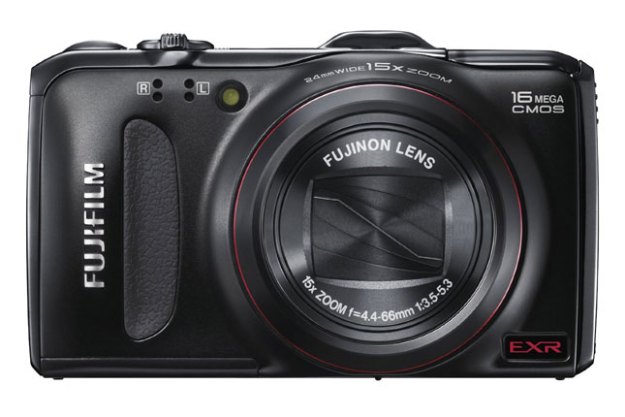 “There’s no denying the Fujifilm FinePix F550 EXR is a remarkable device and packs a punch in its small package.”

It’s easy to feel like there’s a price ceiling when it comes to point-and-shoots: If you spend too little, you’ll be replacing the thing every six months. Spend too much and you’ll end up feeling like you may as well have sprung for a DSLR. So before you write off the Finepix F550 EXR and its hefty $349.95 price tag, there are a few things to consider. The camera comes packed with Fujifilm’s latest sensor technology, which truly improves on the typical pocket cam experience. It’s also outfitted with enough scene presets for any shooting situation you’ll come across, as well as one of the most intuitive manual operation UIs of any point-and-shoot camera on the market today.

The first thing we noticed about the F550 EXR is how different it looks from many competitor point-and-shoots. Many high-end models are indistinguishable at first glance, but Fujifilm makes no qualms about standing out from the pack. It’s a little thicker than rival pocket cams, and perhaps a little heavier than some might like. Personally, we think a little heft gives a camera a high-quality feel, and the F550 EXR definitely isn’t oversized. The camera measures 103.5×62.5×32.6mm (WxHxD) and weighs in at roughly 7.6 ounces, battery and memory card included.

The closed lens slightly protrudes from the face of the camera’s chassis, and it features a grip panel. This further helps to give it a more professional feel, although the camera is small enough to do without it, so it ends up looking a little like it’s just there for show. Around back, the F550 EXR features a mode dial that sits at an angle, straddling the top and back face of the camera. This is yet another unusual element of the device’s design, and while aesthetically it doesn’t distract–and actually frees up room around the shutter button, zoom toggle, and power button–the mode dial’s positioning proves a little difficult to maneuver. It’s a small concession to make, but it is easier to turn the dial with our thumb alone at the base of the dial, otherwise it becomes difficult to properly grip. Again – small concession.

The rest of the back of the camera is much more recognizable and the control dial, playback button, and additional mode button for extended manual use complete the interface. This makes for intuitive use, and it helps users navigate inside what may at first appear to be an unfamiliar scene. Familiarity is all well and good, but the F550 EXR’s 3-inch, 460k dot resolution LCD display steals your attention. Just to offer a comparison, the Canon Powershot S95 (which retails for $400) features a 3-inch, 461k display that beats most, if not all, competitor point and shoot LCD screens out there – and the 550EXR has no problems rivaling it in this department. It’s incredibly bright with impressive, natural contrast.

As for the insides, Fujifilm packed the F550 EXR with some impressive and surprising technology. The most obvious of these features being the camera’s EXR CMOS sensor. The F550 EXR marks its debut, and the idea is that EXR and CMOS capabilities are combined to offer improved resolution and speed. The camera’s 16-megapixel resolution is mildly impressive for its size and price, and its BSI (back side illuminated) sensor improves its ability to shoot in low light and cut down on noise at high ISOs. Of course, its 15x optical zoom and 24-360mm range doesn’t hurt either. The camera’s pop-up flash is also easy to control, and it’s discreet.

In a somewhat surprising move, Fujifilm doesn’t include as many art filters as other point-and-shoots. Honestly, we’re willing to sacrifice these for higher quality presets, which the F550 EXR delivers. The camera includes settings for its EXR mode (to prevent washout, shoot detail, or for high IOS/low noise situations), auto, dogs and cats, panorama, high speed movie, and various other options, like beach/snow, party, and landscape. We actually didn’t miss the built-in fisheye mode we’ve become so accustomed to in pocket cams.

Using the F550 EXR exceeded our expectations. While Fuji is easily one of the most prominent digicam manufacturers, others like Sony and Canon have stolen a lot of the point-and-shoot thunder. And with its untraditional setup and well-publicized new technology, the camera might have too steep of a learning curve for those new to the photography arena. Or so we thought: But in reality, the F550 EXR actually seemed geared for novices but came packed with technology that more advanced photographers can appreciate.

To begin with, the camera’s size and weight feels sturdy and secure while shooting, but isn’t exactly pocket-friendly. This isn’t terribly important, especially when investing this much in a camera – it’s about the last thing most people will think about. Otherwise, it’s a nice size for shooting and isn’t so tiny you need child-sized fingers to use any of the buttons. And despite its unique setup, the camera is fairly simple to navigate. The display’s UI mimics the camera’s physical setup, so while switching through the various modes, you’re given a brief explanation of the setting, what it means, how and when to use it. For example, when selecting Aperture, a half-circle with a large “A” pops up with the message “automatic mode with user setting aperture.” Sure, useless for experience photographers, but learners will appreciate the explanation. Selecting “SP” bring up “Scene,” and from there keeps you from button mashing by telling users to press “menu” to scroll through their other options. Trial-and-error, or a decent amount of experience with point-and-shoots eliminate the convenience this may offer, but it just adds a little safety net to any learning curve that might exist.

While the camera’s UI well designed and easy to navigate, the F550 EXR’s image quality was easily the most impressive element. The AF and shutter were incredibly fast, making it very difficult to take a blurry photo. Photos stayed sharp when we pushed the zoom to its max, and the F550 EXR’s sensor technology indeed made it incredibly capable of handling poorly lit settings. Of course, pushed to its ISO limits (100-12,800), images were somewhat noisy – which is to be expected. We also found the camera’s sweep panorama function a nice bonus. This is becoming more and more common with point and shoots, and it’s a great, easy to use feature we were impressed with.

The GPS, geo-tagging function will likely catch the eye of avid travelers (or maybe just geo-social addicts), but it probably won’t be a big draw for most. That said, the camera records your coordinates and comes preloaded with more than half a million popular locales for easy tagging.

There’s no denying the F550 EXR is a remarkable device and packs a punch in its small package. It’s fun to use, and while it isn’t the most convenient pocket cam to carry around, it still falls in that arena. The most difficult thing to accept with the camera is its price. Were it close to the $300 mark, it would be a more justifiable purchase, but it seems like one of the main features users are paying for is the GPS function. Fujifilm also has a similar device, the F550 EXR, which doesn’t include GPS and retails for $329.95. But it also doesn’t come equipped with the ability to shoot RAW images, which is something we aren’t willing to give up in the F550 EXR.

Nikon launches the Z9, a pro-grade camera without a mechanical shutter
Autel’s EVO Lite and Nano drones are primed to compete with DJI’s best
Fujifilm’s GFX 50S II is the cheapest medium-format camera ever
Apple shows how to shoot ‘otherworldly’ night mode shots on the iPhone
DJI’s new Matrice 30 drone is a mean machine for specialists
How to clean up and organize your photos
This MagSafe iPhone rig aims to give your videos a more pro look
Nikon’s new 800mm lens for Z-mount cameras lightens the load
ReelSteady makes GoPro Player ‘reel’ useful for filmmakers
GoPro takes to the skies with the Hero10 Black Bones
How to turn off the camera sound on an iPhone
24 amazing images of our planet for Earth Day
Instagram test lets you pin particular posts to your profile