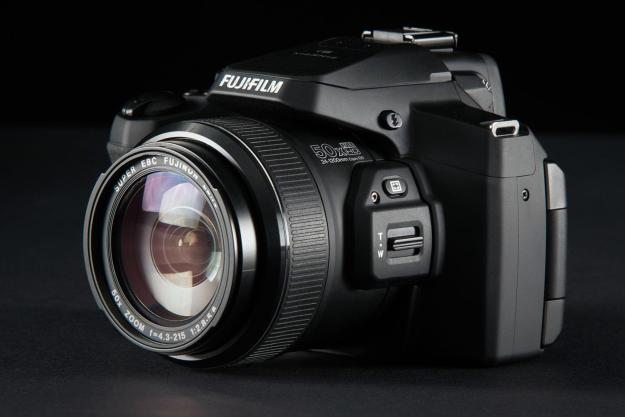 “The Fujifilm FinePix S1 is hardly the perfect super-zoom camera, but it definitely is in the top of the 2014 class.”

When vacation time comes around, new mega-zoom and “bridge” cameras are at the top of many shutterbugs’ minds. For travelers, nothing beats an easy-to-carry digicam with a long focal range, like the 16.4-megapixel Fujifilm FinePix S1’s 50x zoom. Better yet, the S1 is weather- and dust-resistant, so you can get caught in a downpour and not have to worry about it getting wet. We’ve tested a number of bridge cameras lately, so let’s see how the S1 holds up against similar cameras from Canon, Nikon, and Samsung.

Unlike the recently reviewed 60x Samsung WB2200F, which had an unusual shape due to its Dual Grip design, the S1 ($499) looks like most other bridge cameras, like the 60x Nikon Coolpix P600 – in other words, it looks like a DSLR but without the interchangeable lenses. Here, the fixed lens is a scintillating 50x range of 24-1,200mm (35mm equivalent), like the Canon PowerShot SX50 HS. Granted, it’s not the 1,440mm of the P600, but 50x will still get you pretty far.

The all-black S1 has a sturdy, beefy feel with a nice, deep textured grip. It weighs in at 24 ounces (loaded with battery and SD card), and measures 5.2 x 3.6 x 4.3 inches when powered off – much like a compact, entry-level DSLR. At full telephoto, depth extends to around 7 inches. You’ll definitely wear this one around your neck, not stuffed in a pocket.

The key feature Super EBC Fujinon lens with a wide aperture of f/2.8-5.6; this aperture is the best of any bridge camera we have recently tested. In theory, this should mean nice images in low light (but keep reading to see if that’s reality). Also on the front is an AF Assist lamp for faster, more accurate focus. On the left side of the lens barrel is a second zoom switch as well as the Zoom Out button, which helps you re-target your subject if you lose sight of it at extreme telephoto – a very welcome feature.

The top deck is clean with the pop-up flash, two stereo mics, hot shoe, on/off button, and mode dial. The hot shoe has a tight cover to prevent moisture from leaking into the camera. Next to the mode dial are exposure compensation and burst mode buttons, as well as the main zoom toggle and shutter button.

The S1’s positives outweigh the negatives, and its weather resistance makes it even more appealing.

On the back you’ll find the 0.2-inch electronic viewfinder (EVF) with diopter control and a 3-inch vari-angle LCD, both rated at 920K-dot resolution. The EVF is on the small side and fairly dim. The LCD display, however, is better and handles direct sunshine well, once you crank up the brightness. We’re big fans of vari-angle screens since they let you hold the camera at different angles to add a variety of perspectives to your shots. Unfortunately, there’s no eye sensor that automatically switches between displays when you bring your eye to the EVF – you have to manually press the EVF/LCD button. We shouldn’t really expect it on a sub-$500 camera – the P600 and WB2200F use a similar system.

Along with the textured thumb rest on the far right, you’ll find the red-dot video button, a jog wheel for making adjustments, and Playback, Display/Back, and Wi-Fi buttons. There’s also a four-way controller with center Menu/OK key. The four points give access to flash settings, self-timer, focus type (macro), and Function/Delete.

On the right side is a compartment with a rubber-like door covering the HDMI and USB outs. Since this camera is weather resistant, the seal is much sturdier and tighter than other bridge cameras. On the bottom is the battery and SD card slot. The battery is rated a solid 350 shots, and the camera accepts high-speed UHS-1-rated SD cards. We suggest you use the fastest card you can to maximize performance; we used a 64GB SanDisk Extreme Pro SDXC II card.

One difference between the S1 and the other mega-zooms mentioned here: the S1 is the only model lets you shoot unprocessed RAW files, so if that’s a critical feature, the S1 is the one to buy. Other high-priced bridge cameras like the Sony Cyber-shot RX10, Panasonic FZ1000/FZ200, and Olympus Stylus 1 shoot in RAW as well, but they don’t have anywhere near the same focal range.

Fujifilm covers the S1 with the industry-standard one-year limited warranty. More details can be found here.

Like other super-zoom cameras we tested recently, the S1 has a 1/2.3-inch 16.4-megapixel sensor. It’s good enough for most users (emailing, viewing on a computer screen, sharing on Facebook, etc.) but if you’re into enlarging or cropping photos, it may not fit the bill. That said, we were generally pleased with the accuracy and depth of color of our images, even after viewing them at their full size. Despite having a point-and-shoot-sized sensor, most higher-priced cameras from top brands are capable enough for basic picture taking in good light, but it’s the granular details that make the difference, which we’ll get to.

We set the camera to maximum resolution for stills and videos: 4608 x 3456 pixels (JPEG+RAW) and 1080/60p (MOV). (If you plan to shoot at these resolutions, make sure you get an SD card that’s as large and as fast as you can afford.) We used the camera’s various modes, starting off with Scene Recognition (SR) Auto, which is like “smart auto” from other companies, where the camera determines what’s in front of it and chooses an appropriate scene mode (landscape, portrait, et al). Along with regular Auto, it’s a good starting point. Additionally, there’s PASM, Custom, SP (Scene with 12 options), and Panorama modes. The last mode is like Sony’s Sweep Panorama for shooting no-brainer panoramas that are stitched in the camera. Also on the dial are Advanced (special effects) and HDR (High Dynamic Range).

Pretending we were on vacation, we traveled out and about with the S1, shooting bright Southwest locales and even capturing a huge full moon (see samples). Overall, we were impressed by the build and usability of the camera: it feels almost like an entry-level DSLR. However, it has problems grabbing focus at extreme telephoto when you’re in auto modes; this was particularly the case with a cactus in the foreground and a mountain with other cacti in the background. The S1’s telephoto zoom is better than the P600, but not as good as the WB2200F. Fortunately, there are multiple workarounds once you get into manual focus that’s adjusted by the jog wheel. Just be prepared to do some fiddling if you don’t have a high-contrast edge for the focusing system to latch onto.

The five-axis image stabilization is impressive, which worked some wonders at extreme telephoto.

Although some camera purists scoff at super-zoom for being nothing but glorified point-and-shoots or wannabe DSLRs, we find using them to be a lot of fun – almost like going on a treasure hunt. In one instance we were shooting the top of a cactus at full telephoto and discovered there were birds nesting on the top. By luck we caught an airborne battle amongst the birds, but the great thing about these incredible focal lengths is you’ll never really know what’s out there until you peep through the viewfinder or check out the LCD. On the flip side, in the shot of the flying birds, you can notice another shortfall of this camera versus a DSLR: since the S1’s top shutter speed is 1/2000th of a second versus 1/4000 for a DSLR, it’s not great for action shots.

Also impressive on the S1 is the five-axis image stabilization, which worked some wonders at extreme telephoto, since most of our shots were handheld. One image we grabbed of the top of a flagpole even showed the threading on the ball – really cool.

The S1 is very responsive with a burst mode of 10 frames per second, but like every other bridge camera, after a burst the camera “pauses” to save images to the card. Also unlike a DSLR, the maximum burst mode is good for 9 frames, not 60-plus of decent DSLRs, and neither can you shoot continuously using RAW settings. This might be a deal breaker for some but we’re pretty sure the Fine JPEG setting will be more than adequate for the vast majority of photographers that use cameras like this. (Having RAW image capture is nice, but if you’re serious about shooting RAW, you should probably consider a DSLR or compact system camera.)

Whenever we test rugged or weather-resistant cameras, we always save the “beating” for the end, so if the unit dies we’ll still have our samples saved to the hard drive. That’s what we did with the S1, which is weather- and dust- resistant like the Pentax K-3 DSLR, but not waterproof like an Olympus Stylus TG-3 rugged digicam, which you can actually dunk into water. Since it rarely rains in southern Arizona, we simply took the S1, held it over the sink, and sprayed water all over it. A quick press of the on/off button proved the water-resistance claim as the S1 started right up, adding to its traveling bona fides.

The S1 grabs Full HD movies in the MOV format at 1080/60p. It does a decent job (see sample) but exposure tends to be uneven, even with a gentle pan. Color is accurate, however. One negative is the sound of the zoom mechanism, which can be heard if ambient noise doesn’t drown it out. Oh well, at least it’s in stereo.

The camera has a native ISO of 100-3,200, which is significantly less than the competition’s max 6,400 and 12,800 at full resolution. You can shoot at those higher sensitivity levels here as expanded ISOs, but resolution drops dramatically. Results for our tests were solid to ISO 400, then dropping steadily to 3,200. We will say that images weren’t a total disaster, but poor nonetheless – surprising for a Fujifilm camera. Unfortunately, you shouldn’t expect to shoot a noise-free image in low light, even with the wider aperture. But the S1 lets you set a maximum ISO so we suggest turning it to ISO 800 to be on the safe side, ISO 400 if you want less noise. If you’re shooting RAW, you can always reduce noise with the supplied RAW Converter software, which is simple to use.

Fujifilm has a basic app to handle Wi-Fi transfers with your smartphone. You can also geo-tag your images and use your phone as a remote. It’s nothing earth shattering but it gets the job done. We had some issues linking to our Droid 4 since it required installing a new camera-specific app and we had legacy settings and apps from other Fujifilm cameras we reviewed, something average consumers won’t have to deal with.

The S1 is hardly the perfect super-zoom camera, but it definitely is in the top of the 2014 class. In fact, its positives outweigh the negatives by a wide margin, so we’ll easily give it Recommended status. The fact it costs around $500 and is the only weather-resistant mega-zoom makes it even more appealing. Just don’t expect DSLR performance.