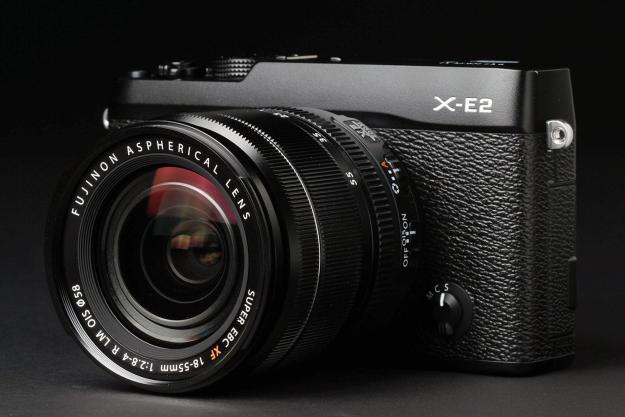 “The Fujifilm X-E2 mirrorless camera requires a bit of learning and it’s not for everyone, but those who master its controls will be rewarded with top-notch photo quality.”

Fujifilm continues to grow its X-series of compact system cameras (CSC), now offering a wide range of models geared for photographers at all levels, from beginners to the experienced. But many of these X-series cameras also command a high price. At $1,400 with a kit lens ($1,000 without), the 16-megapixel X-E2 is decidedly targeted toward a niche group of shutterbugs. If the richest image quality is what you’re after, however, the price could be justifiable – for those with the cash to afford it.

The Fujifilm X-E2 interchangeable lens camera has a classic, serious rangefinder look that harks back to film cameras of yore, but inside is a modern mirrorless camera with lots of excellent features, including a world-class electronic viewfinder, advanced APS-C imaging sensor, and a hybrid autofocus system, among many other tidbits. Like the recently reviewed Canon PowerShot G1 X Mark II, this camera feels like brick, and with the kit lens attached it is a substantial piece of hardware. The X-E2 measures 5.1 x 2.9 x 1.5 inches and weighs more than 23 ounces with the supplied glass and battery – you won’t be putting this one in your back pocket. The all-black review sample we tested looks great, but if you want old-school silver-and-black styling, Fujifilm has that too.

The key feature on the front of the textured body is the Fujifilm X-mount. The company currently has 11 lenses to choose from (primes and zooms) plus there are third-party options from Zeiss and Samyang. You’ll also find an AF Assist lamp and a lever to adjust focus mode (single AF, continuous AF, or manual). There’s a slightly raised grip on the right side.

The top deck has a pop-up flash, hot shoe, and stereo mics. The X-E2 captures 1080/60p videos, so the stereo soundtracks definitely enhance playback on a large screen. Near the hot shoe are a shutter speed dial, combo on/off lever/shutter button, a Function/Wi-Fi key, and an exposure compensation dial (+/- 3 EV).

The viewfinder is one of the best we’ve ever put our eye to.

You won’t find a classic mode dial with PASM and Scene settings, or even a red-dot movie record button – Fujifilm handles mode switching differently on the X-E2, similar to the setup in the X100S. There are only four shooting options: Program AE, Aperture Priority, Shutter Priority, or Manual. Don’t bother looking for the automatic mode, since this isn’t that type of camera. If you’re not familiar with the X-series, many of the camera models are advanced and geared toward enthusiasts, but even they should peruse the instruction manual before getting started, if it’s their first time using a X-series camera. (We’ll talk more the modes in the Performance section).

The back has a terrific 0.5-inch OLED electronic viewfinder (EVF) rated 2,360K dots and a frame rate of 200Hz with the latest firmware (2.0) installed. Without doubt, this EVF is one of the best we’ve ever put our eye to. Images are very crisp and detailed, without much flicker – it’s a beauty. Dominating the rear is a 3-inch LCD rated 1,040K dots. It, too, is very high quality display, but unfortunately it’s in a fixed position and has issues with direct sunlight. A tilting screen would be much preferred, and touchscreen capability would also have been a plus. Fortunately, that excellent EVF is at the ready when the big screen wipes out. An eye sensor automatically switches to the EVF when you bring your eye to the viewfinder.

Also on the back are many nicely identified keys and many have dual functions. There’s Playback, Drive/Enlarge, AE/decrease, Function 2/Delete, AE- and AF-Lock. Across the top are the pop-up flash and Q (Quick Menu) keys, and a jog wheel. A nearby four-way controller gives access to Macro and AF with a center Menu/OK button. Display/Back and a small speaker make up the rest of the fetures.

The left side has a compartment for a mic input and HDMI and USB outputs. On the bottom are slots for the battery and SD card (UHS-1 compatible).

The battery is rated 350 shots, which is fairly standard for CSCs but much less than DSLRs, which are 700 or more. You should juice up before hitting the streets since heavy shooting in burst mode runs it down faster than you’d expect.

Fujifilm considers the X-E2 a “midrange” camera, but it has many of the company’s best imaging components, including a 16.3-megapixel X-Trans CMOS II APS-C sensor and the EXR Processor II – the same as the new X-T1 flagship and the aforementioned fixed focus X100S – a DT-favorite camera. As part of a continuing trend in the industry, the X-E2 sensor eliminates the optical low-pass filter for improved color rendition. That was the case with the X100S and we really liked the images of that camera, so right away we looked forward to shooting with the X-E2 even before fully testing it.

Colors and white balance are very accurate, with a richness, tone, and depth that’s quite impressive.

Another plus for this and other higher-end Fujifilm models is the Hybrid AF autofocus system, which combines phase detection and contrast detection for speedier, accurate response. Fujifilm claims the X-E2 has the world’s fastest AF speed, at 0.08 seconds. It’s difficult to measure things like that, so we’ll take Fujifilm engineers’ (and lawyers) word for it. What we can confidently say is, during the entire testing period we had very few focusing issues other than a low-contrast image of a mountain range and close-ups of a white cat.

We loaded a SanDisk UHS-1 SDHC card and set the camera to maximum resolution for stills and video. Photos were 4896 x 3264 pixels while movies hit 1080/60p (MOV format) with stereo sound. We started off shooting JPEGs in Program AE, then switched to other modes as subjects warranted. Fujifilm supplied the kit lens which, like the body itself, is built like a tank. It’s the classic 18-55mm (3x) zoom but has a wider aperture range than most (f/2.8-4 versus f/3.5-5.6). It also has one of our favorite features, an aperture ring with a nice clicking sound.

First, let’s discuss that missing mode dial. To enter Program AE – the mode that’s as close to automatic as you’ll get – you have to turn the shutter speed dial to A, then make sure the aperture mode switch on the lens is also in the A position. Now you’ll see a highlighted “P” in the lower left-hand corner of the LCD screen. Move the aperture switch out of A and the mode changes to “A,” for Aperture Priority. If you want shutter priority, just turn the shutter speed dial to any number you’d like (bulb to 1/4,000th of a second). For Manual, just keep aperture switch in the manual position, adjust the speed, and you’re good to go; a bright red M appears on the screen. This setup is very different than other cameras with mode dials, and is homage to old-school rangefinders. It takes some getting used to, but don’t be put off by this system, as it becomes more intuitive as you shoot.

The X-E2 is rather speedy at 7 frames per second when shooting JPEGs (max of 28 frames). If you’re grabbing JPEG+RAW the camera slows downs to only eight shots before the camera starts gasping. If you want to blitz through an entire card, it drops to 3 fps. These speeds should be quick enough for most photographers but if action is your thing, the X-E2 may not fill the bill (a potent enthusiast DSLR with 1/8,000 shutter speed should be your choice for action shots). We took the X-E2 to a racetrack, to see just how well it captured speeding horses. We found the X-E2 didn’t hit the 28 max frames before seriously slowing down to save images to the card. For the races, shutter speed was set to 1/2,000 and ISO pushed to 800 to get some reasonable depth of field. Unfortunately, we only had the kit lens and it can only do so much. Even so, the results were quite good.

We’ve always appreciated the Hybrid AF system found in better CSCs and the X-E2’s did not disappoint. As we already mentioned, other than a difficult low-contrast scene or two, we had very few issues with the system. And using the camera is just like any other advanced model, as you adjust settings by turning dials. We especially liked the aperture ring on the kit lens.

Movie quality is very good but not outstanding – it’s all about the photos.

The overall tone that Canon cameras produce has been our favorite, but we also now prefer Fujifilm’s output. It’s hard to put such a subjective observation into definitive words, almost like trying to write about a high-end wine tasting. Sip it and you’ll know the good stuff – closely examine the stills from the X-E2 on a 27-inch monitor, enlarged up to 100 percent, and you’ll “taste” that too. The image quality of the X-Trans CMOS II sensor and EXR Processor II system, combined with the Fujinon lens, yields top-notch results.

The X-E2 handles high ISOs very well. With the f/2.8 glass, you should have few problems in low light. Our test subject held up well at ISO 1,600/2,000, with artifacts appearing as we pushed it to 25,600. With the built-in optical image stabilization you should be fine when shooting scenes in dim settings. As we’ve noted in other reviews, top-end manufacturers have really improved ISO capabilities and we applaud them for that.

Movie quality is very good but not outstanding. Colors pop and the camera focused reasonably fast, but there were uneven exposures during some of the clips (over/under). This was particularly noticeable with a yellow-blooming tree with a blue-sky background. It was also a windy day for that video, so the audio sounded as if a helicopter was landing nearby. However, this is typical of almost every camera we’ve tested, even those with wind noise reduction.

Fujifilm was late getting into the Wi-Fi connectivity game and it shows with the X-E2. It has built-in Wi-Fi but does not offer NFC tagging. It’s not a deal breaker but the company should get with the program like Samsung, Sony, et al. The Fujifilm Camera App is rudimentary, letting you send images to your smartphone, browse what you have on your camera, and add geo-tags. There’s no remote control or editing options. The overall system is simply not as good as Samsung and Sony’s, but the pairing process is relatively fast; Fujifilm should address these issues if they want to be a major player in the wireless world.

We’re fans of the X-series, even with the flaws noted here. Colors and white balance are very accurate, with a richness, tone, and depth that are quite impressive. Fujifilm wants a premium price for its better models and we can’t begrudge the company for doing so. We wish it were less expensive, so that we could add it to our list of favorites. Even so, we can recommend the X-E2 for the discriminating photographer. (The budget-conscious might consider the $799 24MP Sony A6000 kit and similar CSCs out there.)