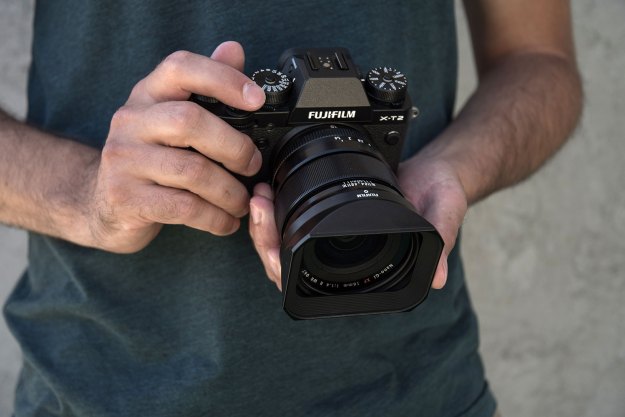 “Fujifilm’s fast wide-angle may not be cheap, but this quality lens packs in a lot of value.”

Fujifilm fans have many reasons to love their X-series cameras, from the classic designs to the superb detail that can be pulled out of the latest X-Trans III sensors. But the true value of the system is the lenses. Fujifilm has put a strong emphasis on fast primes, paying less attention to zooms and cheaper consumer kit lenses (although, it certainly has a few of those, too). It understands its bread and butter is in the enthusiast market, and as we’ll get into in our XF 16mm f/1.4 R WR review, this lens is sharply focused on such users.

At $999, the XF 16mm f/1.4 is a premium product. It is composed of 13 elements in 11 groups with a nine-blade aperture diaphragm for pleasing out-of-focus blur. It yields a 24mm full-frame equivalent field of view, but it is considerably smaller than its full-frame counterparts and gets away with a 67mm filter thread.

Mounted to a Fujifilm X-T2, the 16mm makes for a comfortable combination, although at just over 13 ounces, it isn’t the lightest lens in the world. We tested it while walking around the streets of Boise, Idaho, and while we loved the focal length and the flexibility afforded by the broad aperture range, street photographers may prefer going with a slower — and therefore smaller and lighter — lens. The weight will start to wear on you over time.

The good news is that this lens is incredibly well made, with a solid feel and great handling. As part of Fujifilm’s WR range, it is weather resistant with an all-metal body and mount (a feature that we admittedly didn’t put to the test across multiple 90-plus-degree days in August, but we have previously tested other WR lenses in inclement weather, without incident). It has a gently clicking aperture ring, and the focus ring slides back to transition from auto to manual focus. This style of focus ring may not please everyone, nor does it allow for manual override of autofocus, but it does accomplish one thing that many users have seen as a sore spot for Fujifilm: It provides predictable focus adjustments, with a focus distance scale right on the lens. This adds another plus for street photographers who can use the zone focusing method while shooting from the hip.

The XF 16mm f/1.4 is incredibly well made, with a solid feel and great handling.

Fujifilm X-series lenses use a “focus-by-wire” setup, where rotating the focus ring tells the camera to electronically move the focus motor. The focus ring is not mechanically coupled to the focusing elements, and this is still true in the 16mm. The difference is that most other Fujifilm XF lenses use variable speed focusing, which changes focus to a greater or lesser degree depending on how quickly the focus ring is rotated. While this allows for fine control over micro-adjustments and quick response when making large adjustments, it can be a bit confusing and is particularly problematic for video. The 16mm doesn’t have this problem; it will always focus at the same distance for the same position of the focus ring, and it features true hard stops so you know when you’ve hit minimum or infinity.

We still find the focus-by-wire system to be a bit odd, as you can feel the vibrations of the focus motor even when focusing manually, but this is a small complaint (and no different than other XF lenses).

The lens ships with a plastic, petal-style lens hood, but we had the good fortune of also getting to use the more robust LH-XF16 hood. The all-metal hood offers superior impact protection without causing vignetting and, frankly, looks totally badass. It will run you $70, but this is one of those rare times when spending a lot of money on a lens hood may actually be worth it.

With a premium lens, our expectations were obviously high. Fortunately, it seems Fujifilm has delivered a winner. Some imperfections remain, but the XF 16mm f/1.4 delivers stunning image quality where it counts. Distortion, often the bane of wide-angle lenses, is so well controlled as to be nearly imperceptible. Vignetting is a bit heavy at f/1.4, but this is both expected and not entirely displeasing from a subjective point of view. It comes under control by f/2.8 and is all but gone at apertures smaller than that, so it shouldn’t be an issue for landscape work.

Worse, however, is the sharpness. Wide open, there is a very noticeable difference between the center and the edges of the frame. Like vignetting, this isn’t altogether unexpected, but it is still a bit disappointing on a lens of this price. To be sure, center sharpness is still very useable at f/1.4 and it continues to improve through to the midrange of aperture values. Likewise, peripheral resolution improves as the lens is stopped down, but the edges remain noticeably softer than the center until about f/4, at which point the lens is impressively sharp across the entire frame.

Depending on your needs, the lack of edge sharpness at wide apertures may not be a big deal. For environmental portraits, you can get around it by placing your subject near the center of the frame, leaving the edges to fall outside the depth of field where they wouldn’t be sharp, regardless. However, if you were thinking of using this lens for, say, night sky photography, you might be a bit disappointed.

We were particularly impressed with the XF 16mm f/1.4 when it came to architecture photography, where the wide field of view and very low distortion made for some excellent results. Here, it was rare that we opened the aperture wider than f/5.6, so we were working within the sweet spot of the lens where sharpness and vignetting weren’t of concern.

It’s not cheap, but is quite affordable compared to some of the competition.

Environmental portraiture is another area where this lens shines. At 16mm, the field of view is wide enough to include locational context, while the f/1.4 aperture allows for a depth of field that is just shallow enough to pull your subject out of the background in a pleasing way. You do need to pay attention to vignetting and edge sharpness, framing your shot accordingly, but this is a very usable portrait lens.

We did run into a few, isolated autofocus errors, when the lens acted like it had locked focus but in reality had completely missed the mark. This was infrequent enough to not raise an alarm, and it seemed to occur only when trying to lock focus on a moving subject, but it was still odd coming from a high-end and relatively new lens mounted to Fujifilm’s flagship X-series camera. It’s one thing for a lens to occasionally have trouble locking focus; it’s another when it acts like it’s in focus and allows you to take the shot rather than continuing to search for proper focus. Again, this was an intermittent issue, but it potentially raises a red flag for anyone who may be looking to use this lens in a more action-oriented environment.

Fujifilm offers a one-year warranty on the XF 16mm f/1.4 R WR and all other XF lenses.

At $999, the XF 16mm f/1.4 is not an easy buy for many photographers, but it offers ample value to those with the funds to make it happen. We were a bit let down by the lack of edge sharpness at wider apertures, but the image quality elsewhere is so good that it easily makes up for it. While the occasional autofocus error may be of concern to some, we doubt it will come into play within this lens’s intended use cases of landscape, architecture, and environmental portrait photography.

On the topic of price, we should also draw attention to the fact that, while this is not a cheap lens, it is rather affordable compared to some of the full-frame competition. The Nikon 24mm f/1.4 goes for just under $2,000, while Canon’s equivalent is about $1,550. Only Sigma, with its 24mm f/1.4 Art, comes in below the Fujifilm, at $850.

Now, yes, f/1.4 on full-frame is a wider effective aperture than f/1.4 on APS-C, like the X-T2 we used, but we still feel the pricing difference is notable as some of Fujifilm’s other primes meet or exceed the cost of first-party full-frame equivalents. For example, the XF 35mm f/1.4 sells for $600, well above the cost of most 50mm f/1.4 full-frame lenses from Canon, Nikon, and Sony. Given this context, it would appear that the XF 16mm f/1.4 is actually priced quite reasonably, even if it feels a tad wrong to label a $1,000 lens as truly affordable.

In short, no. For Fujifilm users in the market for a good wide-angle prime lens, the only other real option is the XF 14mm F2.8 R. It’s about $110 cheaper and offers a wider field of view, but you’ll give up two stops of light gathering ability and weather resistance. At just $600, the older XF 18mm F2 R offers a less expensive (and considerably more compact) entry point into wide-angle photography, but it really isn’t in the same league as the other two.

Street photographers may be the one demographic that should opt for something else, despite the attractiveness of the 16mm angle of view. The f/1.4 aperture is likely to be unappreciated here, where it just adds bulk and weight. The XF 23mm F2 R WR, while certainly not as wide, may be the better choice — and it sells for just $450.

Fujifilm X-series owners who can afford it, absolutely. This is a versatile lens that combines a wide field of view, fast aperture, weather resistance, and mostly excellent image quality into what is really an affordable overall package. It is lenses like the XF 16mm f/1.4 that continue to prove how dedicated Fujifilm is to the enthusiast market, and it will be a true asset in any photographer’s collection.

Fujifilm X-T4 vs. Fujifilm X-Pro3: A difference in form and function

What to buy in the 4th of July sales, and what to buy on Prime Day