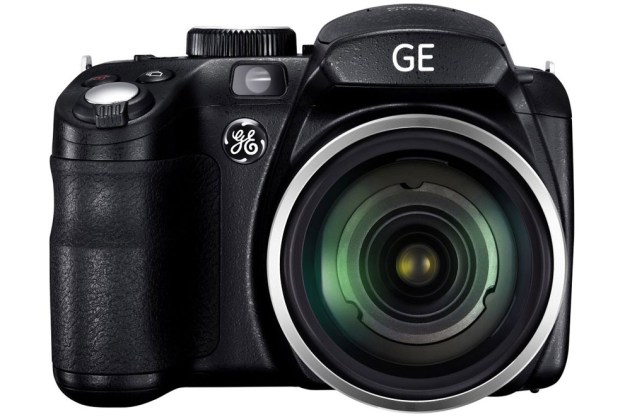 “If you want a long zoom without investing a large sum for an interchangeable lens camera or more expensive bridge model, the X600 is an attractive option.”

Despite talks of the digital camera spiraling down the toilet of obsolescence, there are plenty of bright spots. One sector that’s still seeing growth is the bridge camera, an advanced point-and-shoot that offers both the ease-of-use of an entry-level shooter and the performance and zoom usually found in a DSLR. It’s a great camera to step up to if you’re not ready for an interchangeable lens model, but it can be costly. That’s why the X600 from GE seems so appealing: At $199, you get a 26x optical zoom lens with image stabilization, Full HD video recording, and manual shooting modes. With such a low price tag, can we really compare it to more expensive competing models?

The X600 has that distinctive mega-zoom look commonly found in many bridge models: a chunky device with a pronounced grip that looks like a DSLR that had been zapped by a shrink ray, but with a fixed lens rather than interchangeable ones. The highlight of this camera is the long lens, with a 26x optical zoom with optical image stabilization (focal length of 26mm wide to 676mm tele; f/3.2-5.6). It isn’t as long as the 50x zoom found in Canon’s PowerShot SX50 HS, but it should satisfy many users. The camera has a 14.4-megapixel CMOS sensor that gives it high-speed continuous shooting (7 frames per second), Full HD 1080p (30 fps) video recording, and high dynamic range (HDR) photo capture, but ISO sensitivity maxes out at 3,200. A few other notable features include an electronic viewfinder (EVF), various shooting modes (including manual), and autofocusing with face detection and object tracking.

…The autofocus speed may not be the fastest we have seen, but it is good in most shooting situations.

Designwise, GE kept it fairly simple. On the back you’ll find a somewhat small 2.7-inch LCD surrounded by the EVF, a small grip for your thumb, and a few function buttons (including a four-way rocker button that’s used for navigating menus). On the front you’ll find a tiny microphone below the lens barrel, an autofocus assist beam/timer indicator, and a large rubberized grip for your right hand to easily grab onto. On the left side there’s a speaker and button to pop the flash, while the right side contains the USB and HDMI ports behind a cover. Below there’s a compartment for the battery and SD card (the X600 supports only SD and SDHC cards up to 32GB, although it does support Eye-Fi cards), and a tripod receptacle. On the top you’ll find a the mode dial to switch between the many shooting options, a power switch, the shutter button surrounded by the zoom toggle, a dedicated video button, a button to select continuous shooting, and the pop-up flash.

The X600 isn’t heavy, nor is it light, but its bulky form factor means you may need to carry it in a bag; we were able to stuff it inside a large men’s coat pocket, however. We found the camera fairly easy to operate – similar to a basic point-and-shoot in terms of button layout – and comfortable to hold, although our right palm kept pressing the “display” button inadvertently as we’re shooting. Otherwise, buttons and dials are easily within reach.

While the X600 is one of GE’s more advanced offerings, it’s still a budget camera, so there are compromises to be made. When you compare it to mega-zoom cameras from the likes of Sony and Nikon, the plastic construction isn’t as solid. The 2.7-inch LCD isn’t touch-sensitive and is only 230K dots, so it isn’t as bright and sharp as displays with higher resolutions; you’ll notice the weakness in certain situations like when shooting at night. The same can be said about the EVF, and while more expensive competing models usually include a sensor that automatically switches between the EVF and LCD when you bring your eye to or away from the camera, you must manually do it with the X600. There’s also no RAW file shooting.

The menu’s user interface isn’t as intuitive as we’d like, and when it’s littered with various icon indicators all over the screen, it makes it hard to compose your shot. We also don’t like how GE has assigned some of the function buttons. For example, when you hit the menu button, you are only given a few options. To adjust white balance, you actually have to press the “set” button, but ISO, aperture, and shutter speed adjustments are hidden within the exposure-compensation button. Plus, the camera isn’t always very responsive when you push on a button to adjust a setting. Buttons and menus could have been planned out better.

Along with the X600, inside the box you will find rechargeable lithium-ion battery (rated 240 shots on a full charge; we were able to get a bit more than that, and did not require a recharge for days when used only casually), shoulder strap, AC adapter, lens cap and lens cap strap, USB cable, user manual, quick start guide, and a CD containing a more detailed user manual and Arcsoft Photo Impression software (Windows only).

GE doesn’t include a battery charger. The battery is recharged in-camera via USB connected to your computer or the included AC adapter, which we find somewhat inconvenient.

As one would expect from a budget camera, the X600 does have some performance issues. It takes 3 seconds for the camera to start up and 2 seconds for it to power down. The zoom is also slow, taking 3 seconds to reach its 26x potential. If you’re handholding the camera, you will notice the X600’s optical stabilization struggles when the zoom is extended all the way (a tripod is highly recommended). Shutter lag is also a problem, as it isn’t very fast.

On the positive side, the autofocus speed may not be the fastest we have seen, but it is good in most shooting situations. The object tracking and face detection also worked well, as did the continuous shooting.

For photos, we shot a bunch using the various available modes – from scene and automatic to program, shutter priority, and manual. As an automatic camera, the X600 functions like any point-and-shoot. In shutter priority mode, you can adjust the shutter speed and exposure compensation, but you can’t adjust the ISO. In manual, you can adjust the ISO, aperture, and shutter speed, but the camera takes care of exposure compensation. Interestingly the camera doesn’t offer an aperture-priority mode, and the only setting where you can adjust it is in manual; granted, the X600 has a very small aperture range, so there isn’t much to play with. We thought the panorama mode, however, did a nice job stitching photos together.

In the ideal conditions, the X600 takes decent-to-good quality photos, but they aren’t always the sharpest. The colors are often soft and not consistently accurate. In one of our tests during a cloudy day, the X600 seemed to have white-balance issues. When set to auto white balance, our photos looked a bit on the blue side, but when we set the white balance to the “cloudy” option, it skewed heavily toward orange. The X600 does let you play around with the white-balance settings, at least, but for the X600’s target user who’s used to having the camera do the work, it’d be nice if the setting worked correctly out of the box . The X600 isn’t the greatest performer in low light. Our photos tend to look noisy even at ISO 400; they’re fine at small sizes for sharing on the Web, but we wouldn’t want to print them out at full size. For users who enjoy using scene modes and creative filters, there are a few to choose from.

As for video, you can’t compare the X600 to a Canon. Video quality isn’t smooth and artifacts are clearly noticeable. Although you can zoom during video recording, it’s hard to get a clear shot at full zoom, plus the microphone picks up the zooming noises. You will also want to avoid zooming while recording, because the autofocusing isn’t fast enough to keep up.

If you’re looking to step up from a basic point-and-shoot to a more advanced model that gives you a long zoom, but you’re on an extremely tight budget, the X600 is one of the more affordable bridge cameras you can buy. While it’s listed at $199 list, you can find it cheaper. Mega-zoom offerings from other manufacturers will cost more than twice that, but be aware that for the low price, you are making compromise in quality and usability. Despite its manual-mode offerings, the X600 is really an automatic camera with the ability to adjust some settings when needed. If you value capturing memories over photo quality, and want a camera with a long zoom without investing a large sum for an interchangeable lens camera or more expensive bridge model, the X600 is an attractive option.