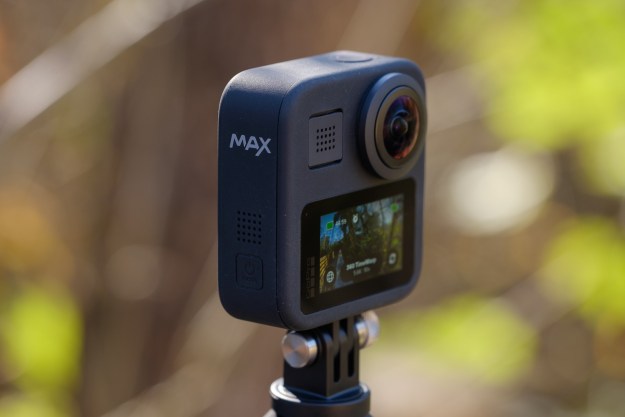 “360 still has growing up to do, but the GoPro Max is a step in the right direction.”

Each new 360 camera that hits the market carries with it the promise of being the one that gets immersive video right. None have yet delivered on this promise. We’ve looked to GoPro before to be the savior the format so desperately needs, but 2017’s Fusion, GoPro’s first 360 camera, left much to be desired.

Two years later, GoPro takes the lessons learned from the Fusion and wrapped them up into the smaller, cheaper, and easier-to-use Max. It’s a hybrid camera that can be used in 360 mode or “Hero” mode, where it operates more like a standard GoPro Hero camera, albeit at just 1080p resolution. As with many other 360 cameras today, the Max’s spherical footage can be re-framed in post, allowing you to “direct” the camera and add pan, tilt, and zoom effects.

It’s a step in the right direction for GoPro. However, the Max is haunted by the 360 format’s usual ghosts, and does little to propel the segment forward. 360-degree video still isn’t ready for serious editing. While the Max is $200 cheaper than the Fusion, at $500 it seems like a toy for early adopters, rather than a must-have creative tool.

It’s clear GoPro put a lot of thought into the design of the Max, both the hardware and software. It’s smaller and lighter than the Fusion, making it more appropriate for the extreme sports situations GoPro cameras often find themselves in, but it’s still noticeably larger than the Hero8 Black.

Surprisingly, the GoPro Max has a built-in touchscreen that lets you preview footage and control the camera. It also shares the Fusion’s offset lens design, which supposedly aids the accuracy of stitching the two hemispheres together. Better yet, where the Fusion relied on a separate memory card for each camera, the Max has a single MicroSD card. Stitching is now handled in-camera as opposed to in post.

That’s good news, but in-camera stitching to a single memory card is par for the course. Cheaper 360 cameras, like those from Rylo and Insta360, have been doing it for years.

Where GoPro comes out ahead is its stellar mobile app. It’s much more capable than it was in the time of the Fusion, and finally embraces keyframe-based editing for reframing 360 content into standard fixed-frame output. GoPro’s reframing tools are the easiest of any 360 camera I’ve used.

You can set camera angles and fields of view at different points in the timeline and the app will automatically pan, tilt, and zoom between them. Unique to the Max, you can also choose how that animation occurs, with options for linear, ease in/out, or jump cut.

The GoPro app lets you seamlessly edit your Max footage with standard GoPro Hero clips or any videos on your phone’s camera roll. It’s a much more complete editing experience than what’s offered by Rylo or Insta360.

Yet while the Max’s controls are the most streamlined and sensible of any 360 camera, it’s missing a few features. GoPro doesn’t offer anything in the way of automatic subject tracking, for example, although I wouldn’t be surprised if such a feature was added in the future. On the hardware front, there’s nothing Insta360’s crazy accessories, which include a dart-like mount that lets you throw the camera through the air to create bullet-time effects.

GoPro is targeting a different customer with the Max. Unlike other 360 cams, it is waterproof without a case, and definitely feels more durable than the Rylo or the One X.

The Max records spherical video at 5.7K resolution, but this number can be confusing. It sounds like a lot of pixels, but all of those pixels are spread across a spherical area, so any one point of view within that area is going to have a much lower resolution. Wide-angle perspectives will look the sharpest, but “zooming” in — which just digitally crops the image — leads to significant softening.

The Max does have a small edge over competitors because it doesn’t suffer from aggressive compression, but it’s certainly not perfect. Don’t expect the same level of detail you get from a GoPro Hero.

Stitching quality is a sore point of every consumer 360 camera, but the Max isn’t bad. Disappointingly, it’s not as good as the Fusion’s desktop-based stitching, which was nearly perfect (but absurdly slow). It is, however, better than the Fusion’s mobile stitching by a fair margin, although objects close to the camera, such as your hands, will still be distorted. Additionally, differences in lighting from one lens to the next can lead to color shifts between the two hemispheres or lens flares that end abruptly at the stitch line.

On the plus side, image stabilization — dubbed “Max HyperSmooth” — is great. 360 grants an infinite range for video to be re-framed without having to throw away pixels, which makes for better electronic stabilization than what you can get with a traditional, fixed-perspective camera. Not only does this smooth out your most extreme mountain bike rides, but it also means hyperlapse videos — what GoPro calls TimeWarp — look incredibly polished.

In fact, TimeWarp is one of the coolest features of the Max. As with standard 360 footage, you can re-frame TimeWarp clips to zoom and pan within the hyperlapse. It’s a neat effect that will make your viewers wonder how you did it. Unfortunately, the Max doesn’t have the Hero8 Black’s ability to automatically select a hyperlapse speed based on camera motion, so you’ll have to manually select 5X, 10X, etc.

Audio is another area the Max shines thanks to a new spherical microphone system. Even in windy situations, dialog came through clearly. Audio often feels like an afterthought on 360 cameras, so it’s nice to see GoPro put in some real effort.

The GoPro Max is a major refinement over the Fusion, but it’s not a big step forward for immersive imaging. It offers an excellent user experience with a decent amount of creative modes and features but suffers from the same limitations of 360 cameras that we’ve been griping about for years. Resolution is merely passable and stitching quality is acceptable.

I was hoping for more. To fix the 360-degree format, cameras will need to shoot at 8K resolution or beyond. Efficiently storing and processing that kind of footage may be beyond the capabilities of today’s phones. That puts companies like GoPro, who want to provide a seamless mobile experience with the best quality possible, in a tough position.

For now, 360 remains a novelty. It can create some striking content that looks good on Instagram, but it doesn’t feel like the revolutionary format we keep expecting it to be.

If you just want to dabble in 360, both the Rylo and the Insta360 One X cost $100 less than the GoPro Max. These cameras aren’t ruggedized and waterproof on their own and lack built-in monitors, but they otherwise offer many of the same features — more, in some cases, like subject tracking in the Rylo and a variety of unique mounts for the One X. GoPro has the most complete mobile editing experience, however, and that alone might be worth the extra cost.

From a durability standpoint, the Max should last for years. It is well made and built to survive a rough and tumble lifestyle. However, from a technical perspective, 360 still has a lot of growing up to do and it likely won’t be long before new cameras outclass the Max’s specs.

No. The GoPro Max is a solid 360-degree camera, but the format just doesn’t make sense for most people. GoPro’s Hero8 is still the way to go if you want to record your adventures.

Best GoPro deals: Sales you can shop today
GoPro Hero 11 Black leak suggests a moderate upgrade
Netflix sheds light on its ‘approved cameras’ for filmmakers
Vloggers, Nikon has built a new camera just for you
How to clean up and organize your photos
This MagSafe iPhone rig aims to give your videos a more pro look
Nikon’s new 800mm lens for Z-mount cameras lightens the load
ReelSteady makes GoPro Player ‘reel’ useful for filmmakers
GoPro takes to the skies with the Hero10 Black Bones
How to turn off the camera sound on an iPhone
24 amazing images of our planet for Earth Day
Instagram test lets you pin particular posts to your profile
Snapchat’s pocket-sized Pixy drone takes to the skies