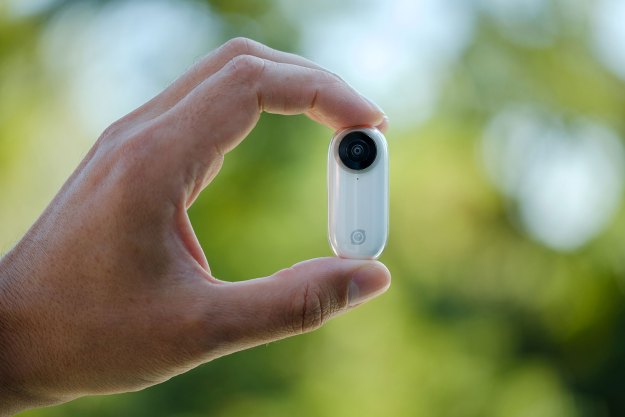 Remember the Google Clips camera? I’d all but forgotten it, and yet the life-logging camera is still for sale — for $250, no less. Now, Insta360 takes the genre further with the Go, a one-button camera the size of an AA battery that serves only to record the mundane circumstances we find ourselves in on this journey called life.

Perhaps this is the sort of product to expect from a company that specializes in the niche of 360 video. I liked the Insta360 One X. As 360 cameras go, it’s near the top of the list — but it’s not an impressive list.

The Insta360 Go is the company’s first non-360 camera (which seems off-brand, but I digress). It’s designed to be worn all day long and is light enough you could forget about it. It’s a Black Mirror level of invasiveness, but it does save everyday memories from an intimate perspective you can relive later, automatically edited into digestible clips a few seconds long.

Who is this for?

I quickly learned my life is not interesting enough to warrant a life-logging camera. Even on a fun-filled weekend with margaritas, a cute dog on a beach, and a Beastie Boys tribute band, I barely compiled enough clips for a 30-second edit. There’s something humbling about watching 48 hours of your life turn into a half-minute highlight reel, but I doubt that’s what Insta360 was going for.

Maybe you’re a hip young influencer, but for most of us, I can’t imagine anyone needing this thing. And yet, it’s undeniably cool from a certain point of view.

It has an ultra-wide (though, again, not 360-degree) lens. The back is magnetic, which is how it mounts to the various accessories. It has just one button. It fits into a charging case like a pair of AirPods. The case has a built-in Lightning connector for use with an iPhone (Android support is on the way).

I learned my life is not interesting enough to warrant a life-logging camera.

And it’s so tiny. It reminds me of the Saturday Night Live skit spoofing Steve Jobs and the iPod “Invisi,” a so-small-you-couldn’t-see-it iPod that floated in midair when dropped. The Go is sadly still affected by gravity, as I found out after dropping it three times in the first 10 minutes of handling it.

And drop it you will. The Go’s slick plastic exterior offers little grip. Fortuantely, I don’t think you could break it if you tried. It’s solidly made, yet also very light. I sent it bouncing across my tile floor without damage. It’s also water resistant, though not waterproof.

The Go isn’t meant to replace an action camera, your phone, or any other camera. Instead, it collects short clips to be edited later. Freshly formatted, it offers just 6.6 gigabytes of storage, good for 22 minutes of video or 3,737 (low resolution) stills.

You control the Go with a single button. A short press turns it on and records a 15 to 30-second clip, while a longer press puts it into standby mode, where you can press twice to start a hyperlapse, or three times to start a slow-motion video. It’s a confusing system to learn, but it’s simple once you adapt to it.

The Go comes with a few included mounts, and the magnetic pendant is the best. You wear it under your shirt, and the Go snaps right to it through the fabric. The magnets are positioned to force the Go into a perfectly vertical position, which is a nice touch.

You can also control the Go through your phone with the hardwired connection on the charging case or over Bluetooth. However, you can’t preview your shot — not on your phone, and certainly not on the Go itself. As a life-logging camera, that shouldn’t be an issue, however.

AI takes the pain out of editing — sort of

What do you do with those exciting clips you’ve collected? Just hand them to the Go app’s AI video editor, FlashCut. It lets you select a theme and then uses image recognition to scan your footage and find any clips that fit the theme.

And boy, do these themes sound enticing. There’s “food,” a self-explanatory personal favorite; “smiles,” which compiles all the shots you have of people laughing and grinning; “city,” which looks for things like buildings, fountains, and other objects you’re likely to encounter in urban areas; and “work,” which recognizes, um, “commutes, computers, coffee, power lunches, and conference rooms.” I’m not making this up.

FlashCut could identify clips, wasn’t great at selecting the best portions of them.

FlashCut did an OK job of identifying clips but wasn’t great at selecting the best of them. Fortunately, you can trim or swap clips if you don’t like the edit. You can edit manually, but that goes against the concept of immediacy the Go tries to embrace.

I also encountered an error when applying music to my edit that caused the app to crash. Hopefully this has since been fixed for the final release.

While Go customers are much more likely to edit on their phones, it is possible to edit with Adobe Premiere Pro using the Insta360 plugin.

Quality isn’t great, but what did you think you were signing up for? Insta360 doesn’t state the resolution, lens aperture, or sensor size anywhere on the box,, and there are no quality settings in the app. Videos and stills export at 1080p and 30 frames per second.

The camera can be used in any orientation and captures more footage than it outputs, which lets you reframe it as standard 16:9, square 1:1, or vertical 9:16 to fit different social formats. That’s appreciated, but important areas of the frame may be cropped out depending on the format you choose.

Image stabilization works very well, automatically leveling the horizon and smoothing out even very rough footage. I wore the camera on a trail run, and while the stabilization made a difference, the results were still blurry. You’d get better results from something like a GoPro Hero7 Black or DJI Osmo Action, action cameras that, while larger, offer better image quality and stabilization.

But the small size of the Go means you can get creative shots not otherwise possible, especially when you stick it directly to a magnetic surface. Overall, however, even your phone will produce better video.

Does this camera work as advertised? Absolutely. Did anybody ask for it? I don’t think so. It’s impressive in its simplicity, and maybe your kids will enjoy it until they drop it down a storm drain.

Where does that leave the Insta360 Go, or life-logging cameras in general? Is there a use for such devices? Is making a hyperlapse of my hypothetical morning commute (I work from home) something I’d do more than once?

I think this is a fun product. It’s small. It’s simple. It’s silly, but in a good way. I also can’t imagine myself using it. At least 360-degree cameras have a wow factor that almost makes them worth it. The Go lives at the center of the Venn diagram where phones and action cameras overlap, but almost all of the time, one of those other devices is going to be the better choice.

Yes. Your phone. In terms of an actual life-logging camera, however, the Go tops the charts — which isn’t saying much.

That’s a good question, and there are a couple ways of looking at it. How much use will you get out of it? My guess is, not very much.

How long will it physically hold up? I do have some concerns because of its size. Small batteries don’t last long, as we’ve seen before with AirPods reportedly losing half their capacity after just a couple years. If you’re at all concerned about tech ending up in landfills, the Go could be a problem.

No, unless you constantly find yourself surrounded by smiling people giving you high fives as you drive a topless jeep down a tropical beach with a fluffy dog riding shotgun. Or if your morning coffee order is just off-the-charts complicated and you want to document it. Otherwise, the Insta360 Go feels like a product for a person who doesn’t exist.

Correction: An earlier version of this article misstated the Go’s desktop editing compatibility. It is compatible with Adobe Premiere Pro using a plugin.