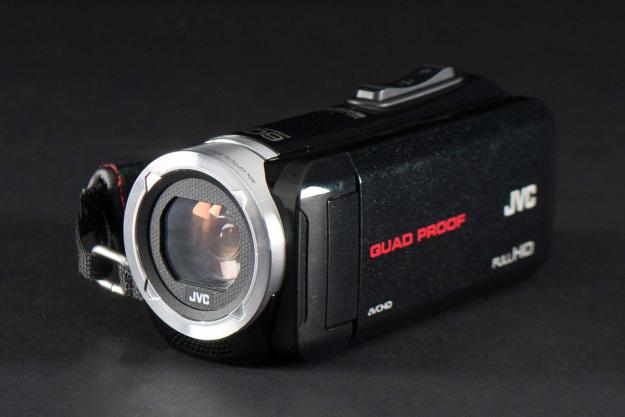 “The toughened-up JVC R10 is a decent camcorder, but just don't take it swimming.”

While most of life’s precious moments can be adequately captured with the photo and video capabilities of our cell phones, there are still times when a capable dedicated camcorder is called for, especially if the footage you’re trying to capture poses a threat to life, limb, and most importantly, that delicate, spendy smartphone.

For those occasions, JVC has put together a line of “Quad Proof” Everio camcorders, which are essentially hardened versions of their capable but less abuse-proof regular Everio HD models. We took one of the more base models, the $350 GZ-R10BU, for an extended tour to see what kind of mayhem it was capable of enduring.

JVC says the R10 is good to 16-feet below the water, besides being dustproof, drop resistant, and having a wide temperature operating range – thus the “Quad Proof” moniker.

Compared to the regular Everio models, the Quad Proof line of Everios weigh a bit more and are a touch larger due to their waterproofing and such, but otherwise the form factor is essentially identical to past Everios: a small, tubular device with a foldout LCD screen (a touchscreen in the case of the R10), handstrap, top-mounted zoom rocker, record button, and not much else. The rear of the camera opens using a sort of double latch system designed to keep the internals dry during submersion; the door hides a normal-size SDHC card slot, headphone jack-style A/V output, micro USB connection (also used for charging the camera), and a mini-HDMI connection.

It’s a crowded little panel but we had no trouble connecting everything at once. The battery, which ran for a total of more than two hours of intermittent on-off use, is sealed inside the camera, so be sure to pack your charger or a micro USB cord and a portable USB charger for in-field refueling. The R10 has another nice feature that’s now finding its way into more camcorders: the camera powers up as soon as you open the LCD screen. There is no “power” button. You can also go into menus and activate the option of instant-on recording when the screen opens, although we typically preferred to maintain control over the starts and stops. But we also found the instant-on record feature worthwhile under some circumstances.

The R10 we tested was dark grey, and JVC sprinkled some metal-flake paint into the plastic shell, so the camera has a bit of sparkle to it in bright sun. It doesn’t help it shoot better video, but hey, it beats boring black. An adjustable hand-strap completes the package.

This is not a camera for shooting your next big-screen HD epic. There are literally no manual controls even though it has a “manual” mode, but that mainly means you can turn off some automated features; there are no PASM options. There’s no focus ring, no manual exposure per se, no audio level controls, and so on. This is an action camera in the vein of a GoPro, but with more capability and, of course, an actual optical zoom lens.

The 60X digizoom does look acceptable – if you can hold it still enough.

All of the R10’s camera controls except for zoom and record/pause are made through the resistive LCD touchscreen, which often took a good poke to activate whatever setting or function we wanted to adjust, but overall it worked well and the simplistic UI makes sense. You can also activate record and zoom using onscreen buttons as well, although we preferred the physical controls.

The R10 shoots both video and still photos. You can shoot stills while you are shooting video by hitting a camera icon on the touchscreen, or you can put it into a dedicated stills mode and it will capture just photos using the thumb trigger along with an onscreen trigger.

JVC advertises the zoom lens as 60x in big letters on the camera itself, but it’s actually 40x in pure optical terms with 20 more x’s added digitally with what JVC calls “dynamic zoom.” Digital zoom still has a bad rap (and for good reason), and really, running the R10 up to 60x is fairly pointless unless the camera is on a tripod that’s been set in concrete, a place this lightweight funcam is not likely to be found.

The 60x digital zoom does look acceptable – if you can hold the cam still enough. Only Buddhist monks well-trained in meditative stillness need apply. Otherwise, normal caffeinated humans can get a fairly watchable image at 40x with a steady hand and the steady-shot feature on, but even then, playback on a big TV may induce some nausea. The zoom will scale up to 200x but it is totally useless and we wish camcorder makers would quit with that nonsense already.

On the other end of the lens, the R10 shoots fairly wide, giving it decent flexibility in tight quarters.

The R10 is definitely in its element when used outdoors, during the day when light is plentiful. Clips of bike rides, pool parties, lake adventures, and so forth look crisp and colorful, if a bit low on contrast. The autofocus system includes face detection and it seemed pretty foolproof, which is good since there is no manual option to rack it yourself.

Since the camera is waterproof, audio quality is compromised to certain degree.

Video shot inside at night with typical incandescent lights resulted in fairly grainy but still serviceable footage, although color was fairly muted and the autofocus would hunt on occasion, but that was rare.

Since the camera is waterproof, audio quality is compromised to a certain degree. Sound on playback is fairly tinny and thin, and an acoustic guitar performance played back on a home audio system sounded as though it was coming through a telephone. Sweetening the sound in editing software may be an option if the sound quality is too annoying, but it didn’t quite cross that line for us. Still, with no external microphone options, this camera is probably not the best choice for recording your buddy’s band rehearsal.

Also, some purple fringing on bright details crops up toward the end of the zoom range, but it was minor and most consumers using this camera probably won’t notice it. Still, it was nice to have that much actual optical magnification to play with in such a small package, and the optics were well-controlled by a large zoom rocker on the top of the camera that is a huge improvement over past Everio zoom controllers.

Photos taken with the R10 were usable, but only just. Even in broad daylight, stills were very noisy and mottled, even with resolution at the 10-megapixel maximum in pure photo mode, settings tweaked, and shooting outdoors on a cloudless day. It’s probably a measure of how spoiled we are by modern gadgets to complain about the quality of the stills; just a few years ago we would have been overjoyed with photos from a dedicated video camera that are this average. Now, snaps out of a smartphone will shame the R10’s still shot quality; about the only saving grace is the big zoom lens.

JVC claims the camera is waterproof, but it was during this phase of our evaluation that we ran into a serious problem. The rear panel of the R10 has a rubberized insert that users must make sure sits squarely in the oval cavity where the SD card and connection panel resides. A safety lock, of sorts, is provided in the form of a small slider switch on the bottom of the R10. If the switch shows red, the waterproofing panel is not secure, so users should re-check the closure.

This camera is probably not the best choice for recording your buddy’s band rehearsal.

Prior to our submersion test, we closed up the camera nice and tight, seating the rubber stopper in the rear section and made sure the safety was fully engaged and not showing red. We then handed the camera to this reviewer’s son, who has also used many camcorders, and he waded into a pool to test the underwater performance. About 20 seconds into the recording, the R10 shut off. When we opened the camera up to get the card out, water poured forth and it never booted up again – it had flooded completely. We’ve used and own several waterproof cameras, so pre-submersion prep is not a new drill for us, but for a sealing system with a failure that is clearly fatal to the camera, this one needs a thorough rethink.

JVC was kind enough to ship us yet another R10 (which arrived after having been thoroughly crushed by the shipping company – when will the logistical nightmare end?), but credit the R10’s tough design since it survived and worked fine, despite a few scratches. Now gun shy, we didn’t submerge the second camera, so our main complaint with the R10 lies with the somewhat unreliable rear sealing system that apparently completely failed despite our best intentions. It’s possible we had an unlucky faulty unit, but make sure it’s sealed, on your end.

Overall, video performance from the R10 was good. More contrast would have been nice but the video had good color, the autofocus was both quick and accurate, and the motion dampening system seemed up to the task at all but the longest of zoom settings. The camera boots up quickly and the setting to start recording (when the LCD screen is opened) is a useful option. The UI doesn’t take a genius to understand, either. It takes usable still photos in a pinch but don’t expect DSLR (or even iPhone) quality. The toughness of the camera is reassuring when it’s out in the elements but as demonstrated, the sealing system for submersion could use a redesign or a significant update to assure users it will survive swimming with the fishes.

For what it is – a toughened but user-friendly camcorder – $350 seems a bit steep for a stand-alone camcorder in this day and age of $400 wonderphones with HD video capability and so much more built in. But if you want a knock-around camcorder you don’t want to worry about, the rugged R10 seems like a decent choice. Just don’t take it swimming.