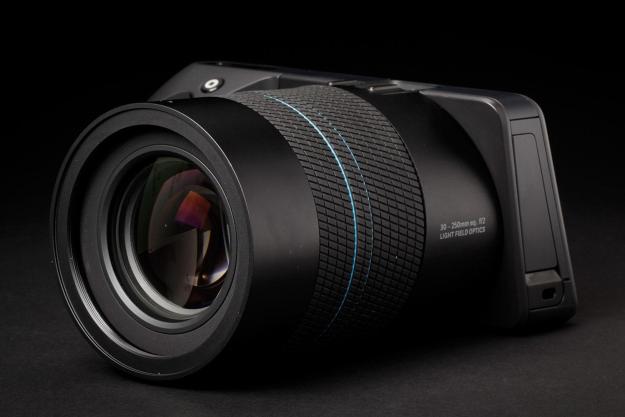 “Sure, the Lytro Illum’s ability to refocus an image is still cool, but it’s not enough to justify the high price and so-so image quality.”

Update on April 10, 2015: Lytro has a new version of its desktop software (Lytro Desktop 4.2) that adds some improvements, at least in the post-editing process. Photos can be easily added to the 500px photo-sharing website, and there is a better method for sharing links and adding animations on Facebook. In image editing, there’s a new Lens Flare Reduction tool to minimize artifacts and glare; Defringe tool for fixing chromatic aberration (purple fringing); Auto Tone for adjusting black and exposure levels; and Tilt tool for adding fun effects. There are also enhancements to workflow.

Lytro created buzz when it introduced a revolutionary camera that lets you refocus an image after it has been shot. It uses light-field technology, which is based on an array of micro lenses that take in light from all angles. The amount of information it gathers is what allows the camera to do its magic in post-editing. Despite earning our Recommended award, the camera is a novelty, producing image quality that’s average at best.

After a few years of inactivity, Lytro is back with the more-powerful Illum. It offers the same refocusing feature, as well as features like perspective shifting and animation. But like its predecessor, it is still one of the most unusual cameras available; it’s hard to even call this a camera, at least in the traditional two-dimensional sense. And at $1,599, it’s one pricey gadget, but is it strong enough to go against high-end traditional cameras that cost just as much (or even less)?

The Lytro Illum looks like a camera that could have came from the future. It has possibly the coolest industrial design we’ve seen in the digital imaging space, in a long time. Of course, our opinion is totally subjective; it’s certainly polarizing, as there are plenty who think the design is weird.

There’s definitely no confusing this camera for all the seemingly similar DSLRs. It has an angled back, clean lines, 4-inch tilting LCD screen, and the dominating 8x optical zoom. It’s also huge, measuring 5.7 x 3.4 x 6.5 inches, and weighing just over 2 pounds. It’s not pro-DSLR heavy but it’s no lightweight. The magnesium and aluminum body has a matte finish with a nice feel. Since the camera is so tall the grip is comfortable, but as always, you need to do your own hands-on.

The 8x zoom lens (30-250mm, 35mm equivalent) has a constant aperture of f/2.0. (More on the lens and light-field sensor in the Performance section below.) On the lens barrel are two rings to adjust focus and zoom power.

Unlike a traditional camera, exterior items are kept to a minimum. On the front of the grip is a jog wheel. The top-deck has the power, shutter, and Lytro buttons (a half-press of the Lytro button shows “depth feedback for the object at the center of the frame; a full-press displays a live depth histogram and depth overlay,” according to Lytro’s manual), as well as a hot shoe that accepts all major flash brands; Viltrox makes one for Lytro and it costs $249. It’s unfortunate there’s no flash built-in, as it comes in handy for certain situations. There’s no mode dial of any sort; settings are changed via the touchscreen.

We used the Illum over the course of several weeks and found the learning curve to be steep but not insurmountable.

The 4-inch touchscreen dominates the back. It’s rated 800 x 400 pixels, which is much lower than the displays in other cameras in this price range. Another bummer is the fact it has way too many reflectivity issues, and really is best used indoors even with the Auto Brightness enabled. On the top right is a second jog wheel, while below it are four keys: AF, AEL, Hyperfocal, and Function. AF will automatically focus on the object in the center of the screen, and AEL is auto exposure lock, similar to that of other advanced cameras. Function switches between capture and playback mode, while Hyperfocal sets the focus of the lens to the lightfield hyperfocal position (moves the far end of the re-focusable range to infinity). You can adjust the focus of anything in the hyperfocal range. Yes, this sounds strange but we must stress the Illum is unlike any camera on the market.

A compartment on the left has the SD card slot and USB connection, while the one at the bottom holds the lithium-ion battery. Lytro rates the battery at half-a-day for consistent use, with an estimate of 400 photos.

The Illum does have Wi-Fi connectivity but it only supports iOS devices, not Android. We guess Lytro feels only Apple owners will appreciate it. As with all cameras, the Lytro app has a straightforward pairing process with an iPhone or iPad.

Before going further, we must state there’s a definite learning curve with the Illum and you really should read the online owner’s manual and watch the video tutorials to make the most of this system. Definitely do some homework before you even think of purchasing the Illum. Just because it has a lens and shutter button, doesn’t mean it operates like a traditional camera

You’ll need Lytro desktop software, which can be download from Lytro’s website (no software CD is included). This critical program lets you perform light-field effects such as changing focus, perspective, and depth-of-field, among other things. Think of it as the software that develops RAW files from a traditional camera

The Illum comes with a standard one-year warranty. You can find the full legal details on Lytro’s website.

Unlike a regular camera or even the ones in smartphones, the Illum does not have a classic sensor rated in megapixels. Here, it’s called a 40-Megaray Lightfield sensor based on CMOS technology. Before you think this is a 40-megapixel image, realize the sensor is only 1/1.2-inches (10.82 x 7.52mm) with an effective resolution of 2,450 x 1,634 pixels. Do the math and it’s a 4-megapixel camera using a tiny chip. It also features the Lightfield Engine 2.0 processor for 3-frames-per-second (fps) shooting. Clearly if we saw specs like this for a $1,600 camera we’d have thought we traveled in a time machine back to the 1990s! Let’s get to the reason the Illum is so expensive.

Colors weren’t sharp or rich – not even accurate. We even saw purple fringing.

With the Illum, you capture what Lytro calls “Living Pictures.” (It’s not motion pictures since the Illum doesn’t take videos.) By using the desktop software you can manipulate your files by changing the focus point, as a primary example. Say you shot a scene with a plant in the foreground and mountains in the back. By using the software you can bring into focus whatever catches your fancy, making it the focal point. There are other neat tricks you can do, but refocusing is the main benefit. Also, think of the Lytro file as a 3D cube of information you can adjust on the desktop. As a matter of fact, you can only capture Lytro RAW and Lytro X-RAW files, no traditional 2D JPEGs.

We used the Illum over the course of several weeks and found the learning curve to be steep but not insurmountable. Whether all the work is worth it depends how intrigued you are working with Living Pictures. For everyday photography we much prefer a traditional camera with quality autofocus, optical image stabilization, superior lenses, and a much larger sensor. Not to say the Illum is a total bust but for 99.9 percent of photographers, the Illum doesn’t make sense. In our view photography is all about capturing your vision, meaning you’re the one doing the composing and shooting. Everyone makes focusing mistakes so having the ability to change it is a good feature, but paying $1,600 for the pleasure of using a rather awkward camera doesn’t strike us as a good deal.

The camera has four mode settings, accessible via the touchscreen – Program AE (P), ISO Priority (I), Shutter Priority (S), and Full Manual. We primarily used P but shifted into I for our sensitivity tests. The screen itself is fun to use and combined with the front jog wheel, it’s easy to maneuver. That said, the Illum physically felt rather clumsy to use in the field. We imagine if owned this camera long-term, we’d get used to it, but we are warning you again: there’s a steep learning curve here.

After we shot our images, we downloaded them to an Intel i7-equipped PC and it took a long time to convert them, much longer than 2D RAW files. (You should go do something else while your photos are being processed.) Once done, we started to manipulate our Living Pictures. We found the entire process frustrating and not worth the effort. Colors weren’t sharp or rich – not even accurate. We even saw purple fringing, a real blast from the point-and-shoot past. Sure, they can be manipulated with software, but to what end? That said, it was somewhat enjoyable reviewing photos on the tilting touchscreen, adjusting focus and depth of field. But $1,600 enjoyable? Not really.

The Illum has an ISO range of 80-3,200, much less than almost any camera available in 2015. And with a tiny chip, noise is really bad. Again, you can use software to improve them but the big-name camera makers have nothing to fear from this baby

This version of Veltrox’s flash is made for the Illum, but the Illum supports all other third-party flashes.

The Lytro files can be quite large, so use a fast, high-capacity card.

The Illum has a nice grip, but add a secure hold with a hand strap.

The Lytro Illum may seem like a cool-looking, cutting-edge camera, but blow away all the smoke, and you’re left with a $1,600 4-megapixel mega-zoom that doesn’t even record movies. We’re not buying into it, as the system currently stands: it is not intuitive, has a steep learning curve, and the end results aren’t great. In comparison, you can buy the constant aperture Sony Cyber-shot RX10 with a 20MP one-inch sensor and a constant aperture f/2.8, 24-200mm lens that even shoots 1080/60p videos, for less than a grand. Of course, the RX10 doesn’t have light-field technology but at this early stage of the game, we can live without it in our ordinary 2D world.

We had high hopes for the Illum, since the light-field technology really wowed us at the beginning. Granted, the technology is still nascent and one to watch, and Lytro has promised more products are on the way. (We could also see the technology in future smartphones, and in non-consumer imaging products for security and medical – licensing the tech to Apple or Canon might be what Lytro should do.) It’s possible Lytro could unveil firmware updates that unlock new potentials. But like the original Lytro camera, the Illum is early-adopter territory.