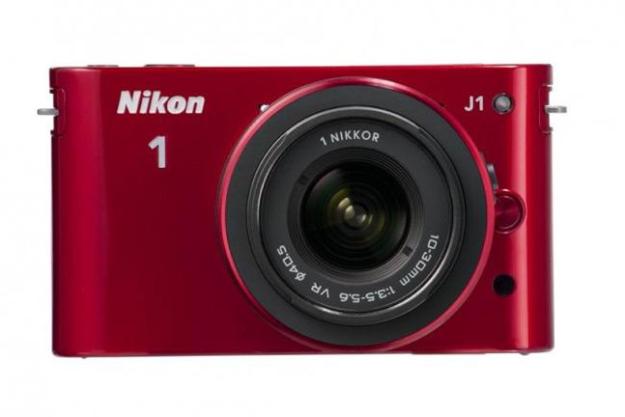 “Although the Nikon 1 J1 has a lot of pluses, we feel the negatives (and the competition) make it difficult to recommend unreservedly. It’s a good, but not great, camera.”

Compact interchangeable lens cameras like the Sony NEX and Olympus PEN got a big shot in the arm when Ashton Kutcher’s company decided to enter the game. The Nikon J1 clearly is targeted to the point-and-shoot crowd, rather than purist photographers who prefer Nikon DSLRs like the D7000. Now let’s see if it’s worth the money for shooters of any stripe.

We have to hand it to Ashston, er Nikon—the J1 is an attractive, compact camera with soft edges. Not only is the J1 available in a variety of colors, in many instances the lenses are color coordinated, giving the camera a really finished look. We’re surprised other manufacturers haven’t jumped on this in a big way, so hat’s off to Nikon.

Since this is a mirrorless interchangeable lens camera, it’s much more compact than a traditional DSLR. In fact, the smaller size is one of the key reasons this type of camera even exists. They also have larger imaging sensors than point-and-shoots and better response, making them logical choices for someone who’s frustrated by the limitations of aim-and-forget models. Of course you’ll have to pay for this convenience, as they cost more than even the best point-and-shoots such as the 10-megapixel Canon PowerShot S100 or G12.

Our review sample was white and looked really sophisticated. There are just two logos on the front: Nikon 1, J1. The lack of mention of megapixels or other arcane terms gives you a strong indication for who this camera is designed. The camera feels solid, measures 4.2 x 2.4 x 1.2 (W x H x D, in inches) and weighs 9.8 ounces for the body, battery and card.

As with any camera, the key feature on the front is the lens. In this case, Nikon created an entirely new mount, dubbed the Nikon 1 Mount. There are only a few lenses available at this time, but they cover the basics: 10-30mm, 30-110mm, 10-100mm zooms and a 10mm fixed-focus pancake lens. The J1 and sibling V1 feature a new CX-sized sensor with a 2.7x digital factor, meaning every lens you attach is multiplied by 2.7 to get the 35mm equivalent (DSLRs are around 1.5x, and Micro Four Thirds are 2x). That means the basic 10-30mm VR kit zoom is really 27-81mm. DSLRs with their supplied 18-55mm zooms are 27-82.5mm, so they’re pretty close.Nikon states there will be more lenses to come as the system builds in the years ahead, but don’t expect the 50+ options for Canon and Nikon DSLRs right away.An FT-1 adapter for F-mount lenses will also arrive soon.

The front also has stereo mics, an AF Assist lamp and an infrared sensor. The right side has a compartment for USB and mini HDMI outs, while the left is clean. On the top deck is the manual pop-up flash, tiny pinhole speaker, power key, shutter and red-dot movie record buttons. There is no hot shoe or accessory port like other mirrorless cameras, so there’s no way to add an optional viewfinder or GPS. You’ll find this capability on the more expensive V1.

The rear of the J1 is dominated by a 3-inch LCD rated a solid 460K pixels. On the top left is a switch to pop up the flash, while moving to the right side is an F key for changing burst-mode settings, as well as another to enlarge your images during playback and make adjustments in manual. Below this is mode dial with only four options: Camera, Smart Photo Selector, Motion Snapshot and Movie. Superficially, this is a lot less than the options of high-end cameras, but if you dig a little deeper by reading the manual you’ll discover Camera lets you access manual, aperture/shutter priority and Smart Auto Selector. That last one is a new option, where the camera guesses the subject in front of it and adjusts accordingly. Here the camera takes 20 shots at 30 fps and chooses the one it determines is the best. It’s a good feature, but don’t expect to grab speeding race cars, as the camera stops working as it saves images to the memory card.You’ve probably seen the TV ads of Ashton Kutcher shooting a J1 and one of the highlights is Motion Snapshot. This is one of those ridiculous features someone thought was cool and everyone signed on. When you’re in this mode, the J1 shoots one second of video along with a still. During playback, you see a combination of two in slow motion with a music soundtrack. What were these people thinking? They would be much better off using this spot on the dial for Scene modes or art filters. Why? There aren’t any on this supposedly bleeding-edge camera. You can’t specifically choose Portrait or Landscape; the Smart Auto Selector does this for you. We would like to have the option along with art filters or a setting for HDR. The CMOS chip should handle those chores with ease.

Below the mode dial is a four-way controller surrounded by a jogwheel for moving through menu adjustments or reviewing your images. The four points on the controller give direct access to exposure compensation, flash options, self timer and AE/AF Locks. You’ll also find display, playback, menu and delete buttons.

The bottom of the made-in-China J1 is a metal tripod mount and compartment for the battery and memory card. Of course it accepts SD media, and you should opt for the highest speed class and at least 8GB. We used a 32GB Class 10 SDHC card. Unfortunately, the battery is rated only 230 shots,so buying a spare would also be a wise move.

The Nikon 1 J1 is available in a wide range of kits and colors. The most basic provides the body and 10-30mm VR f/3.5-5.6 zoom for $649,but for $899 you can get that lens along with a fixed-focus 10mm f/2.8 pancake lens. Nikon also has another outfit with 10-30mm/30-110mm with Vibration Reduction,also $899,and if you’d like to carry around a pink camera for $929, you’ll get those lenses too. Also in the box are the battery, plug-in charger, various caps, USB cable and a CD-ROM with Nikon ViewNX2 software.All of these prices are list,but we’ve seen the starter kit for $599 and less.)

We had the Nikon 1 J1 for several weeks and did our best to fill that 32GB card. As mentioned earlier, the J1 is a 10-megapixel Compact System Camera featuring Nikon’s new CX-size ship—its DSLRs use much larger DX- and FX-size sensors. How much larger? Glad you asked, because this has a lot to do with our results. CX chips measure 13.2mm x 8.8mm. This is much bigger than the best point-and-shoots, such as the Canon PowerShot G12, which is 7.6mm x 5.7mm. That’s great, but competing Micro Four Thirds chips found in Olympus PENs and Panasonic G series cameras are 17.3mm x 13mm. APS-C (or DX) imagers found in Sony NEX and Samsung CSCs as well as most DSLRs are around 24mm x 16mm. The Holy Grail—full-frame sensors, the same size as 35mm film—are 36mm x 24mm. What’s this numbers game all about? Picture quality. The bigger the sensor, the more light is accurately processed resulting in higher-quality photos. There are other issues as well, such as lens quality and processors, but all things being equal a larger sensor will take better pictures. When we reviewed all the images taken with the J1, we also opened a folder with sample shots taken by a Sony NEX-5N with a 16MP APS-C-sized sensor. The Sony images were far better, showing that a bigger chip delivers on the quality front. That’s not to say the Nikon 1 J1 is a failure, we were just hoping for more. Let’s delve into the details…

Over the course of the review period,we shot Thanksgiving celebrations, many street scenes in Manhattan, as well loads of that quintessential holiday photo op—the Christmas tree and skating rink at Rockefeller Center. As always, we shot at maximum resolution for photos and movies—10 megapixels and 1080/60i, and moved through the dial, starting off in Smart Auto Selector. Before getting into the results, we’ll state the J1 is enjoyable to use. It has a good feel, controls are nicely positioned and the weight—even with the 30-110mm telephoto—was hardly noticeable. You’ll have no problems carrying this rig around all day. We have to point out the menu system, although easy to use, seems very dated. It should be refreshed for Gen 2.

As for the photos and videos, results were uneven. When there was enough light, such as walking through the streets of Manhattan during the afternoon, the photos were very good. Colors were accurate with solid reds and plenty of detail. The same held true when shooting indoors with the flash. Although small, it came in quite handy for indoor shots, and to use as a fill-flash in backlit conditions. Yet on many images, when we enlarged them 100 percent on the monitor, we noticed a softness that was somewhat disappointing.

When we visited Rockefeller Center to see the tree, the sun was sinking and results were mixed. In some instances, colors were muted, but in others the images were right on the money. Toy soldier statues were excellent, but we couldn’t get a solid shot of the tree taken much farther away. The built-in VR in the zoom lenses worked fairly well.

One really good feature of the J1 is its focusing system. It’s fast and accurate, barely slowing the camera down. The Nikon uses a 73-point AF setup that switches between phase detect and contrast-phase detect, depending on the ambient light. This is a real highlight, as is the burst setting of up to 10 frames per second. Don’t expect miracles, however, as it’s still difficult for most cameras to focus on a fast-moving subject and keep it tack-sharp. Still you’ll have more chances than ever for a keeper.

Another good area is digital noise, or lack thereof. The J1 has an ISO range of 100 to 6400 and—amazingly—the results from 3200 were very impressive. It blows most point-and-shoots right out of the water.

Videos were also superior. The J1 captures 1080/60i MOV files and they looked “camcorder” level on a 50-inch HDTV. You’ll like them, as well as the ability to take a still while shooting video without interrupting movie recording.

The camera does not have an accessory port as do many competitors. The port lets you add a viewfinder, flash, GPS or similar accessory. Since the J1 has a flash and the LCD screen worked well under almost all light conditions, this is not a detriment—we just wanted to point it out. The more expensive Nikon 1 V1 has the port, if that’s important to you.

Although the Nikon 1 J1 has a lot of pluses, we feel the negatives (and the competition) make it difficult to recommend unreservedly. It’s a good, but not great, camera. We’ve used the $449 Olympus Pen Mini E-PM1 and Sony’s latest NEX cameras, such as the NEX-5N. Although they too have their flaws, overall they’re better than the J1. We hope Ashton steps up for the next generation of Nikon 1 models.