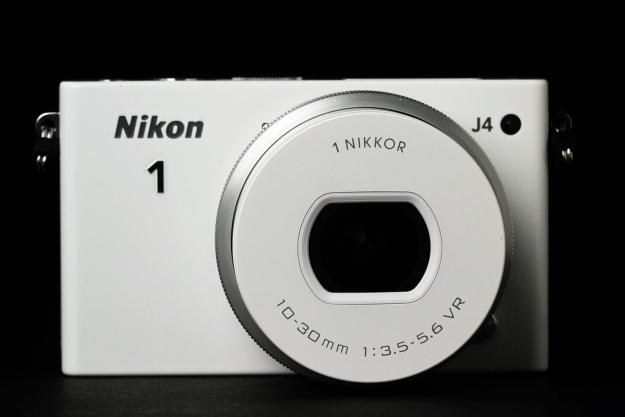 “The Nikon 1 J4 may be a good mirrorless camera, but Nikon really needs to turn up the volume when you consider the strong competition.”

Nikon continues to touch all the bases in the interchangeable lens camera world, from Editors’ Choice models like the $3,300 (body-only) D810 geared for pros, to the 18.4-megapixel $600 (lens included) J4 mirrorless compact system camera (CSC) that’s designed for everyone else. Although the camera is simple to operate, and it’s super responsive and delivers good photos and videos, we wish Nikon had really turned up the volume, considering the more appealing competition in the mirrorless market.

One distinct advantage most mirrorless CSCs have over traditional DSLRs is size, and the J4 certainly fits that description to a tee. The body is very small – almost pocket camera size – at 3.9 x 2.4 x 1.1 inches. Without a lens it weighs just 6.8 ounces. Load a battery, card, and attach the kit glass, and the whole package still weighs less than a pound. For those who like customization, there’s a choice of four colors (white, red, black, and silver); our white review sample came with a color-coordinated kit lens with a convenient built-in lens cover. It’s clean and nice-looking all around.

For its mirrorless cameras, Nikon has a different lens system (1 Nikkor) and mount (CX) from its APS-C and full-frame DSLRs. Currently there are 13 lenses available that range from macros to telephoto zooms. The included kit lens we used – 10-30mm – will satisfy the J4’s target customer (first-timers to interchangeable lens cameras), but there are other lens options when said user wants to grow his or her photography skills.
Related

In keeping with its minimal design, the J4 does not have a hot shoe for optional accessories. Perhaps Nikon thinks mirrorless newbies will have no need for add-on accessories like flashes, but the built-in flash should suffice. Nikon does offer an LED lamp that attaches via the camera’s tripod screw at the bottom.

The back is pretty sparse as well, and it’s dominated by a fixed 3-inch LCD touchscreen (rated 1,037K dots). The LCD works well even in direct sunshine and is responsive to finger taps. Besides the typical camera control buttons, there’s also a slightly raised thumb rest on the right corner to help keep the camera steady. But, since the camera is so lightweight, it’s not a critical feature.

The left side has a button to manually open the auto pop-up flash and a tiny door covering USB and HDMI connections. The bottom is the battery/memory card compartment. To keep things small, the J4 uses MicroSD cards more commonly found in smartphones. We find them a bit too flimsy and prone to displacement if you prefer to take the card out to download the content into your computer, versus plugging the camera via USB. The battery is rated at 300 shots – decent, but could be better since most CSCs offer 350 shots.

The J4 comes with a color-coordinated 10-30mm (27-81mm 35mm equivalent zoom) with built-in stabilization and lens cover. There’s also a battery and plug-in charger. You also get a strap, USB cable, and a 130-page printed user manual. Nikon also supplies the ViewNX 2 CD with software for handling files.

The 18.4-megapixel J4, like other models in the Nikon 1 lineup (the enthusiast-level V-series and the budget S-series), uses CX-size sensors measuring 13.2 x 8.8mm. Although bigger than the chips in point-and-shoots, the CX sensor is much smaller than competing Micro Four Thirds and APS-C sensors found in other CSCs. And the results show: the 18.4MP files of the J4 will not have the depth and richness of those larger sensors (this is where the megapixel myth comes into play; more megapixels do not equal better quality). And since the chip is smaller, the digital factor is greater (2.7x) so multiply by that figure for 35mm equivalents; APS-C is 1.5x.

This is not to say we dismissed the J4 out of hand. The J4 offers photographic enhancements over a point-and-shoot and even some low-end APS-C cameras, but we are just pointing out you shouldn’t expect miracles even though Nikon dropped the low-pass (anti-aliasing, or AA) filter to improve sharpness. As we’ve already said, the J4 is really for casual shooters moving up from a basic digicam, so the fact it has larger sensor and interchangeable lenses is “good enough” for this group of photographers. The recently reviewed Samsung NX3000 is also targeted to the same audience, as are the Sony A5000 and Olympus PEN E-PL7.

Overall photo and video quality is quite good.

Before getting into our hands-on results, let’s discuss the J4’s graphical user interface (GUI) and user experience. Simply put, it’s one of the worst we’ve used in years, and that’s saying something. Although the camera has a mode dial, it’s an abbreviated one. That means, Instead of the usual 10 point-and-shoot options, it has only five choices: Motion Snapshot, Best Moment Capture, Auto, Creative and Advanced Movie. There are no PASM (Program AE, aperture/shutter priority, or manual) or scene modes at the ready. In order to access them you have to turn the dial to Creative, press Menu, and then hit OK. At that point you can scroll through the PASM options as well as HDR, panorama, and special effects. You can tap through the menus as well, but this is an extremely convoluted way to shoot.

And if you want to change white balance or ISO you have to enter Image Processing under Menu, then make your adjustments. Another option is hitting Feature on the four-way controller, then tapping a specific setting and turning the jog wheel or swiping. There are graphics on the right that are more obtuse than informative. Yes, like any camera, we’re sure users will get used to operating it on a day-to-day basis once they determine their needs, but Nikon sure has made things difficult. And amazingly, for a camera geared to casual shutterbugs, there are just a handful of scene modes (portrait, landscape, et al) to choose from. However, when you’re in Auto, the camera will automatically pick the appropriate scene. We thought these complex GUI issues were long gone but that’s definitely not the case here (shades of early versions of Sony NEX cameras!).

We set the J4 to maximum resolution for stills (5,232 x 3,488 pixels, in JPEG/RAW) and video at 1080/60p (MOV files). The J4 is a very responsive mirrorless camera. We had very few focusing issues since it uses Hybrid AF, a combination of phase-detection and contrast-detect systems. This type of system is found on more expensive CSCs, so it’s good to see it in a $600 kit. The camera is also seriously fast, hitting 60 frames per second (fps) and 20-fps when tracking.

Overall, the images shot were good, even better than the aforementioned Samsung NX3000 we recently reviewed. In comparison, colors were much more accurate with a nice depth. Of course, you probably won’t want to go crazy with 100-percent enlargements (as you can with larger sensors) but the targeted user will be quite pleased.

The J4 captures Full HD 1080/60p movies and quality is also good. If you’re looking for a new camera that can shoot video, this resolution should definitely be on your checklist rather than 1080/30p. Although there are some newer codecs such as XAVC-S with faster bit-rates, 60p MOV clips are really good.

Given the relatively small size of the sensor, we weren’t expecting great things in terms of ISO response, which has a range of 160-12,800. The results from our test were pretty poor, with noise entering the scene at ISO 800 and then degrading as we pushed the numbers higher. Even though Nikon has specific Noise Reduction settings at 6,400 and 12,800, they really didn’t help much. Your best bet with this camera and kit lens is shooting in daylight or using the flash when indoors.

The J4 has built-in Wi-Fi, which works well with the Nikon Wireless Mobile Utility (WMU) app for iOS and Android. We had no problems pairing the camera with a Samsung Galaxy S5, quickly moving files between devices.

Although Nikon 1 cameras are big sellers, we’ve never been their biggest fans, and the J4 has done little to raise our opinion. Nikon DSLRs, on the other hand, are a completely different – and better – story, even though they’re bigger and more expensive. And at $600 retail for a single lens kit, the J4 is relatively expensive, even though you should take that suggested retail price with a huge grain of salt. Like we said about Samsung’s NX3000, the J4 isn’t a bad camera, but there are better options are out there – especially when you consider its convoluted user interface.