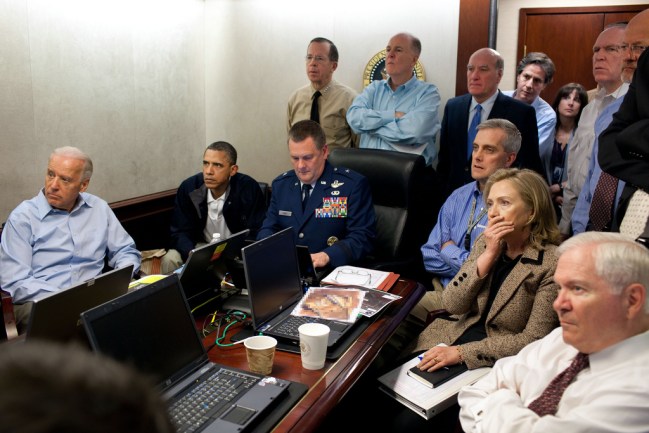 For those of us without top-level security clearance, this week’s Osama bin Laden drama has mostly unfolded in the online realm. Here, we first learned of the terrorist leader’s death (or, in the case of many teens, learned who this Bin Laden character was in the first place.) We chatted about the 9/11 mastermind’s demise with our fellow world citizens on Twitter, and endured our idiot cousin’s conspiracy theories about it on Facebook. But nothing has embodied the event online like a single photo from the official White House Flickr photostream, which captured America’s top brass receiving an “update” on the Bin Laden military operation.

Commonly known now as the Obama “Situation Room” photo, this picture (above) is reportedly on its way to become the most viewed image on Flickr, and has helped boost the White House Flickr page from a standard 100,000 daily views to more than 3.5 million. According to TechCruch, the picture has already garnered more than 1.5 million views alone, which puts it half way to the nearly 3 million views it needs to beat out a 2006 picture of India’s Nohkalikai Falls, the site’s current leader.

And that’s just the official version, on Flickr, which doesn’t account for the countless iterations available elsewhere online. Mere hours after the picture was posted on Flickr on May 2, it became its own meme, with people posting photoshopped renderings with everything from a PlayStation 3 controller added to President Obama’s hands to ‘Sad Keanu’ joining in on the historic moment. On 4Chan, users offered up their best guesses for what the powerful crew in the picture are actually looking at — the more ridiculous the better, of course.

It’s not hard to see why this image has come to define this heavy, historic moment. Official White House photographer Pete Souza snapped the behind-the-scenes shot of President Barack Obama, Vice President Joe Biden, Secretary of State Hillary Clinton, and a variety of other top military and security personnel in the administration, exactly as the long-awaited mission to take out Bin Laden played out.

The expressions of naked intensity on the faces of our most powerful leaders — those who, in public, most often wear masks of cool poise and control — spark curiosity and ignite the imagination. What on Earth could they possibly be watching or hearing? Why does Clinton look like she just saw a ghost? Are they watching some Navy SEAL actually pull the trigger on America’s most-wanted man?

We will never know the true answers to these questions. Which is fine — the Internet is having so much fun coming up with its own.

Topics
Where to download free stock photos and public domain images
This A.I. app converts any photo into 3D, no dual lenses required
How to colorize a black-and-white photo
Google Photos now lets you print and pick up photos at a local CVS and Walmart
How to remove the background from an image
Instagram boss says to expect even more video content
6 awesome Earth images captured from the ISS in July
This GoPro Hero 10 bundle is $100 off at Best Buy today
The best iPhone tripods for 2022
Watch this Mavic 3 drone soar above the world’s highest mountain
How to watch DJI unveil an all-new drone today
DJI Avata vs. DJI FPV: Which first-person drone is best for you?
Astronaut reveals source of ‘intriguing’ bright light on Earth