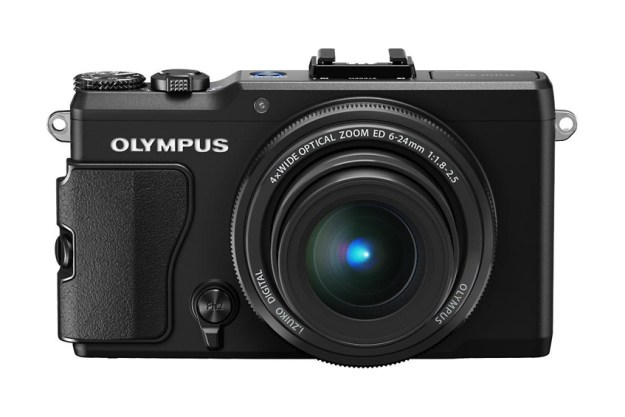 “If you plan on using your smartphone for most on-the-go capture, but want something to create higher quality images with, consider the XZ-2. It won’t break the bank or weigh you down, but it will absolutely outperform your iPhone.”

Olympus first introduced us to its XZ-series with the XZ-1, a sleek, powerful point-and-shoot. However the camera was overshadowed by the PEN series, which have easily become a tent pole for the camera manufacturer. Now the high-end point-and-shoot is back, although with some new branding.

The XZ-2 now falls under Olympus Stylus branding, though it shares its roots with the XZ-1. The XZ-2 fits into the recent rash of highly-capable, DSLR-like point-and-shoots that are tricked out with buttons, controls, and functions from here to kingdom come. But there’s plenty of competition in this space, so can the $600 XZ-2 compete with the likes of the Canon G1X and FujiFilm X100 and X10, plus comparably priced DSLRs?

The basic size and build of the Stylus XZ-2 are fairly similar to the first generation XZ-1. It’s boxy and a little bit bulky, but not unwieldy by any means. Unlike the original, however, the XZ-2 has a little more to it, aesthetically. The screw-on grip adds a bit of professionalism, along with the added function mechanism on the camera’s face.

Like its high-end competitors, the XZ-2 has buttons, dials and controls to spare. The back of the camera features your classic mode dial, as well as the playback, function, menu, and info button – nothing unusual here, and none of it is overly crowded by the 3-inch, vari-angle touchscreen display. The top of the camera features the secondary settings dial, as well as the shutter and its surrounding zoom toggle. The power control sits next to the hot shoe port, and it rather sunken into the body – it’s a little offputting, but luckily it does mean that when it’s in your bag it’s not going to accidentally get turned on.

While it’s definitely on the heavy side, you can still hold the XZ-2 with one hand. The settings mode dial on top of the camera is a little sticky, but it’s nothing to majorly complain about. The front lens dial, on the other hand, is wonderfully smooth.

Overall, the Stylus XZ-2 is a much bigger, bulkier, machine – there’s simply more to it than the original version. Personally, we think this just means there’s more to love, but those who liked the sleek, rather minimalist look of the XZ-1 might balk a little at all the added bells and whistles and the larger, heavier body they contribute to.

The matte black body is still very stylish, however, and the new model more closely resembles Olympus’ PEN series, an attractive lineup in its own right.

While Olympus has been busy upgrading its camera technology and hardware in recent years, we’ve never been big fans of its in-camera interface and navigation system. There’s something about it that seems just unfamiliar enough to be slightly disorienting, even if just initially.

For the most part, you’ll be able to change important settings simply by hitting the OK button, and then navigating to the right or up. White balance and lighting settings can be found here, so even if your experience operating in-camera menus is fairly elementary, you can get to some of what’s important.

There isn’t, however, direct access to manipulating the ISO setting – a pretty big miss, in our opinion.

Still, Olympus has made improvements to its in-camera menu navigation.

We found that the abundance of hardware control Olympus puts at your fingertips with the XZ-2 really keeps users from getting lost: You can essentially hit either of the two main dials – on the back of the chassis as well as the lens-surrounding dial – to control your settings.

Olympus has also started loading its in-camera UI with icons, which will surely help relative newcomers to manual photography get more comfortable. It’s still by no means the easiest menu to wander through, which is glaringly clear in the settings menu. Olympus reps showed us how to find a variety of incredibly useful settings and feature in here, but it’s impossible to replicate those steps all that easily, which is unfortunate.

While the XZ-2 lets you tweak everything you could ask for, it takes too long to get to some of the tiny, detailed settings. However all of the modes you usually rely on (save ISO, which we already talked about), are very easy to get to.

Like we said, the XZ-2 has upped the ante where features are concerned. Specifically, the 3-inch vari-angle touchscreen, its bright, fast lens, and focus on customization stand out.

The XZ-2’s display definitely steals the spotlight. Olympus has bet big on touchscreen cameras, outfitting its recent PEN series models with the technology, as well as the OM-D E-M5 and of course, now the XZ-2. What’s great about the touchscreen is perhaps what’s great about this model in general: Options for customization. You can turn touch off entirely, use it as a shutter, or for one-touch focus. We found it incredibly responsive and fast; no frustrating lag time or double-touch necessary. We still prefer a hard shutter button for shooting, but the ability to swipe through photos in playback (something we’re all acquainted with thanks to the smartphone) is a really nice feature.

We used the tilting vari-angle feature countless times: For over-the-crowd shots, you can hold the model up with the screen pointing down at you. For low-to-the-grown macro shots, point it directly up. Should weather conditions – be they too bright or dark – make viewing the LCD display too difficult, you can manipulate the angle for a better view instead of contorting your body to see your setting better.

We’re also impressed with the XZ-2’s lens. The camera sports a 28-112mm equivalent F/1.8-2.5 zoom lens, which is great because while it is a fixed-lens camera, you’ve got a nice, versatile lens to work with. It’s bright and fast. While there are comparable cameras out there that boast the minimally faster, wider F/1.4 spec, you aren’t making a major concession here. Plus, when fully zoomed, you still have a max aperture of F/2.5, so you don’t sacrifice too much in the speed department (something other cameras in this bracket sometimes have to do).

As previously mentioned, one problem we have with the XZ-2 is the fact that there’s no direct way to mess with ISO settings – that being said, Olympus packs a lot of function customization into the camera. You have two dedicated function buttons, one on the back and one on the front of the chassis. We highly recommend you choose one of these to determine ISO. There are also two custom slots within the top mode dial at your disposal. Elements like this keep a camera like the XZ-2 interesting: Even after you’ve experimented with your manual settings and pre-sets and filters, you can play around with your own custom modes that you’ve perfected to your specific needs.

Olympus relatively recently made its filters more robust, so you can choose between two to three different flavors of each. Within the camera’s shooting setup, you can also choose to capture one shot in a multitude of filters, a really nice feature we’ve used and loved.

Other features worth pointing out are the XZ-2’s pop-up flash, hot-shoe port, and dedicated-video record button. There isn’t a viewfinder, however, which purists may cry foul over. But suffice it to say this is a tricked out camera.

The Stylus XZ-2 uses a 12-megapixel, high-sensitivity BSI CMOS sensor, which is comparable to other cameras it’s competing with. It’s perhaps a bit smaller than some of the standouts (we’re thinking of the FujiFilm X100 and Canon G1 X, although it should be noted these are also more expensive models as well).

For the most part, the camera’s sensor, image processor, lens, and AF speed combine for impressive quality. Tone is natural, noise is minimal (unless you push above ISO 1,600, where things get iffy), and shutter and focus lag are barely noticeable.

The one image quality issue we had was, like with the XZ-1, shots in dark settings. As you can see in the image below, things take on a painting-like look. While the foreground is pretty sharp, look even slightly into the distance and things are somewhat blotchy, almost spongy. It’s not that it doesn’t create an interesting image, but it’s surely a bit of a performance issue.

This isn’t to say you can’t get some really nice images in darker settings, you just have to put a little more effort than you might imagine into fussing with your settings. Don’t even think about using iAuto or any pre-set modes; you’ll want to rely on your full Manual mode, most likely.

Which brings us to the main performance issue we had with the XZ-2: iAuto. In a camera like this, that you’re spending $600 on, hopefully you aren’t planning on relying on its automatic setting. Still, the main idea behind a fixed-lens, point-and-shoot camera is that’s faster and easier to use than its higher-end DSLR or MFT brethren. And to us, this means such a camera should have a reliable auto mode that churns out impressive photos. Not as impressive as when you choose your shutter or aperture priority settings, but still pretty damn good. Unfortunately, we weren’t sold on the camera’s iAuto performance. Photos in any sort of indoor or relatively dark setting were grainy. Outdoors, photos were better, although thanks to harsh, overcast Northwest skies, were easily blown out.

But again, if you’re spending $600 on camera, iAuto had better not be where that mode dial sits very often.

The XZ-2 shoots 1080p full HD video, and you can also throw any of its art filters on. We’re big fans of the diorama video effects. You can also manipulate exposure before shooting, and zoom is also entirely available – but that’s where your control ends. There was no unfortunate zoom grinding or jerking, though, and the auto focus was also impressive – no in-and-out blur and focus was all that obvious.

All cameras that share a genre with the Stylus XZ-2 are a tough sell. They bridge the gap between stupid-simple point and shoots and MFT or DSLR devices – although they usually come with a hefty price tag.

The XZ-2 is most assuredly a niche device, though camera buyers are becoming smarter and more able use them. Eschewing entry-level point-and-shoots for something you know you can’t do with your smartphone isn’t a bad choice. The XZ-2 will certainly please with its performance, as well as challenge users to dive in deeper and learn how to really put it through its paces. It’s undeniably a fun, versatile camera.

If you plan on using your smartphone for most on-the-go capture, but want something to create higher quality images with, consider the XZ-2. It won’t break the bank or weigh you down, but it will absolutely outperform your iPhone. Many, many times over.