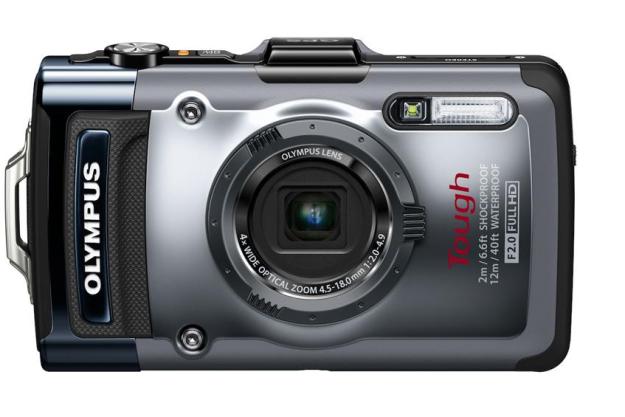 “Looking for a tough cam? Then the TG-1 should be at the top of your list. It’s hard to justify many other comparably priced units which have fewer features and capabilities.”

Most tough cams offer average image quality, have no manual controls, and are only used on the one snorkeling vacation you’ll ever take. (We’ve harped on the momentary usability of these cameras before.) For all their amazing durability (“lifeproof!”), they generally underperform as cameras.

Enter the TG-1. While it’s not a DSLR in point-and-shoot’s clothing, with an F2.0 lens and a host of unique features, it’s certainly evolving this market.

One of the great things about the TG-1 is that it has the appearance of a compact camera. Take a look at the bulky, hefty competition and you’ll see what we’re talking about. It’s definitely a little bigger than your average point-and-shoot, but not by much. Olympus isn’t trying to pack too much into a tiny body and creating something unmanageably heavy in the process. Aside from the double-lock door and non-traditional coating, you’ve got yourself a fairly normal-looking compact system.

It’s important to note that you have to pointedly call this thing a compact system — it’s not a point-and-shoot. (We’ll get into that later with the TG-1’s features.) Because you can add accessory lenses, it looks and feels like a compact camera. In reality, it’s more of a hybrid; part compact, part point-and-shoot, part tough cam.

The front of the TG-1 has a subtle grip with the Olympus logo, paired with a thumb grip on the back; together they’re pretty effective. The top of the camera houses the power and shutter buttons. The former is small yet nice and clickable, but we wish the latter had a harder click to it when capturing images.

Surprisingly, the back of the TG-1 isn’t over-crowded with big, hard-to-miss-underwater buttons. The mode dial sticks a bit, but that’s to keep you from accidentally switching during action shooting. Below that is the control hub used to navigate the in-camera settings. There are dedicated playback and video capture buttons as well as a zoom toggle. While all this protrudes from the chassis slightly more than your average compact or point-and-shoot unit, it’s not bulging from the body too much.

That leaves plenty of room for the TG-1’s 3-inch OLED screen. Even shooting underwater, this stayed clear and bright, although blacks were slightly mottled in playback. As far as aesthetics and in-hand feel go, however, the TG-1 is a refreshingly normal looking camera, avoiding the overly utilitarian and big button-overload look that we seen on far too many tough cams.

The Olympus TG-1’s interface is incredibly easy to navigate. While Canon generally wins when it comes to simple-to-master in-camera controls and settings, the TG-1 gives its competitor — the D20 — a run for its money in this department.

Dual dials of any sort can be off-putting for a beginner, but everything is so uniformly laid out that a few turns, switches, and clicks will be enough to feel comfortable and get you out of relying on auto.

After choosing Program, iAuto, Scenes, Magic (filters), Low light, Action, or your custom-made settings, users rely on the OK button and arrow controls to determine settings like exposure, white balance, and flash. All that is located on the right hand and bottom banner of your screen, and text is big, bright, easy to read, and best of all — limited.

The only complaint we have about this system is that when you want to apply multiple settings, after hitting one you’re redirected back to the top of the list of options instead of leaving off where you last were.

Here’s an example: Imagine you’re changing white balance. That setting is located third down on the right-hand side menu. After that, you want to change exposure. But instead of ending up right back at white balance, you’re bumped back up to the top and have to scroll down the list to make more changes. Admittedly, this is a small complaint and one that doesn’t outweigh the overall effect, but it wastes precious time.

One the main reasons anyone buys a tough cam is for underwater shooting. Sure, there are the accident-prone among us who spring for these durable models because of clumsiness, but adventure photography and submerged shots are a huge part of the sell. The thing is, you need to be able to control your camera underwater.

That OLED screen helps considerably, and even in shallow, murky water we were able to change exposure and make sure scene selection was set correctly. In fact, during our hands-on snorkeling time with the TG-1, it quickly became clear it was easier to let yourself float on top of the water and keep the screen underneath to fuss with settings. That speaks highly of the clear screen and manageability.

Without a doubt, the feature that sets the TG-1 apart from its rugged cam competition is its ability to use lens accessories. These are some serious bragging rights. Many kudos go to Olympus for breaking out of the mold and giving a much wider range of consumers something that had previously only been available at steep prices.

There are two lens converters available for the TG-1: a fisheye and a telephoto. We had a chance to try out the fisheye for some nice wide-angle shoreline photography. It makes an effective little tool, although you’re going to get some water drops, so you’ll need to surface and clean off. All in all, this accessory could have been a lot worse; built-in filters that some competitor cameras sport can’t even hold a candle to this effect.

Of course the extra lens adapters will cost you, but there are levels to being serious about action and underwater photography. If it’s more than a one-time thing, it’s worth investing in.

A couple other extras also set the TG-1 apartment from its cheaper rugged cousins. A manometer, for instance, lets you know how deep underwater you are and warns you when reaching the camera’s max depth of 40 feet. Of course, you’ll want to know that the camera is also shockproof up to 6.6 feet, crushproof up to 220 pounds, freezeproof up to 14 degrees Fahrenheit, and dustproof.

There are other features that deserve mention in the TG-1, even though they might be overshadowed a little. Even without adapters, the camera’s F2.0 lens is fairly outstanding among the rest of the rugged cam market and seriously helps with the camera’s low-light performance. Its processor also means the general use is nice and snappy.

Shooting with the TG-1 is simple and easy. There isn’t much to think about given its point-and-shoot mentality: The settings and in-camera UI are designed to get you in and out and back to shooting. However, a little bit more manual control would make the TG-1 more unique. But even with the limitations, there is enough built in to the TG-1 to keep you from getting bored.

For all of its flash and features, the value of any camera comes down to one thing: image results. You can almost forget that this matters with the TG-1; there’s so many accessories and settings that the simple things might slide by.

Fortunately, the TG-1 is a very decent shooter, but don’t expect too much. The camera has a 1/2.3-inch, 12-megapixel CMOS sensor (same specs as the Canon PowerShot D20), so you can expect satisfactory results, but nothing even touching the more capable systems of many $350+ compacts out there.

While there isn’t much to brag about in the sensor department, the TG-1’s F2.0 lens gives it a leg up. Low-light shots are impressively clean, and you can push ISO impressively low. On the other end, you tap out around ISO 800 — much farther and things start to get pretty grainy. The same goes with full zoom. But these things are to be expected, really, and its low-light performance is a remarkable coup, especially in an underwater cam.

Olympus does a good job with the TG-1’s burst mode. You can shoot full resolution at up to 5fps using the camera’s sports mode; and if you’re willing to sacrifice pixels at the cost of speed, you can reduce resolution to 3-megapixel and shoot at up to 60fps. Expect some noise, but it’s about priorities, and this makes a great option when speed is one of them.

While the TG-1’s burst mode is sort of a junior nod to the incredible abilities of the OM-D E-M5 (that unstoppable shutter click is music to our ears), its stabilization has a long way to go. The higher end units in Olympus’ lineup are increasingly using its five-axis IS system, which the TG-1 obviously doesn’t have. At full zoom, things got a little iffy, and there was some blur underwater, but nothing far beyond the performance of most point-and-shoots.

Refresh rate and startup are quick and shutter lag doesn’t stand out, although it’s a bit difficult to determine underwater. Button click is fairly palpable, but an even harder press-and-release feel could help. There’s just a lot going on when you’re trying to shoot in such conditions, and there were a handful of times when it was difficult to tell if we’d taken a picture or just brushed the shutter.

Shooting video underwater, however, was easy. The bright OLED screen was a useful asset, and the big dedicate video capture button definitely helped. Again, zooming is going to get a bit shaky, but otherwise results are smooth enough and it picks up sound very well — almost too well. You’ll hear some gear-grind when you’re zooming and focusing when the subject scene is fairly quiet… say, underwater.

The TG-1 iHS has set the bar very high for itself, and we’re happy to say it just about reaches it. Tough cams are an increasingly popular breed, because consumers want versatility — and they deserve it. As compact systems become more and more advanced and thus expensive, we should be able to find something that can check multiple boxes, including being “lifeproof.”

You can check that right off with the TG-1, thankfully, without sacrificing too much in other areas. Other compact cams will yield better image quality, but they won’t boast this bevy of features. If you’re looking for a multi-tasking machine, then the TG-1 is a great bet — especially given its $370 price tag, making it comparable to its competitors.

A better sensor and more manual controls are on our wish list for this camera, but all things considered it is easily the best bet for your tough cam money.

Looking for a tough cam? Then the TG-1 should be at the top of your list. It’s hard to justify many other comparably priced units which have fewer features and capabilities.

GoPro takes to the skies with the Hero10 Black Bones