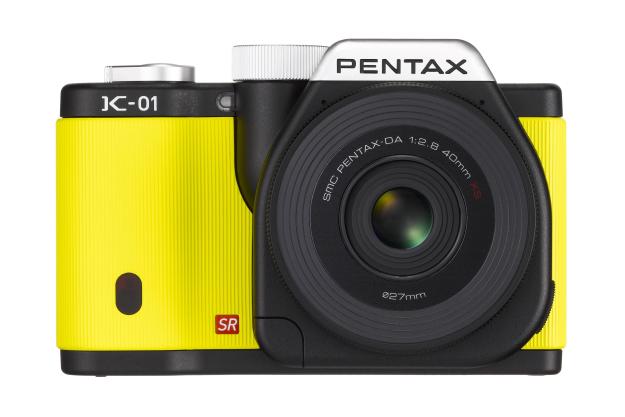 “Given the right circumstances, it grabs very nice stills. However, there are just too many negative issues.”

Designed by Marc Newson, the new 16-megapixel mirrorless Pentax K-01 is one of most daringly-styled new cameras in years. Whether the “beauty” is only skin deep, we’ll find out shortly.

It’s not every day a camera company asks a world-famed designer to create an important new model. Yet that’s what Pentax did for its second mirrorless camera. Really it’s the first, because the Q, Pentax’s original mirrorless offering, was so handicapped by its tiny sensor and ridiculously high price hardly anyone heard about it — or bought one. The new K-01 is a much more mainstream Compact System Camera (CSC) featuring a 16-megapixel APS-C imaging device, just like many Sony and Samsung mirrorless models and DSLRs, but it is more expensive than the competition.

Just as important, the new K-01 has a Pentax K mount, so a huge library of lenses can be used, similar to the arsenal for Canon and Nikon DSLRs. By comparison, the Pentax Q mount only had a few, just like Fujifilm’s new X-Pro1. Even Sony, Olympus and Panasonic — in the mirrorless market for years — have about 15 each. But let’s get back to Mr. Newson’s work.

The Pentax K-01 is available in yellow, white and black (our review sample was black). Check out the photos. With its contrasting colors, oversized controls, boxy look and multi-colored keys, the camera looks like a toy, not a serious piece of technology. We know designers should be given creative freedom, but in this case the overall impression is not a good one. Now if you want to make a fashion statement, by all means look at the yellow edition, which is a bold standout. Whether you like any of them is so subjective we’ll leave it at that.

Speaking of personal tastes, the K-01 is not a comfortable camera to use — at least for our hands. There is no large bump-type grip as found on some other mirrorless cameras, or the classic DSLR pistol grip. It’s so much thicker than any Compact System Camera on the market, we highly recommend you handle it before you even think about other factors such as photo or video quality. For the record, the K-01 measures 4.8 x 3.1 x 2.3 (W x H x D, in inches) and weighs 16.9 ounces without battery, 19.7 with. This is one hefty camera thanks to its machined aluminum frame, and is even heavier than the new Nikon D3200 DSLR. Why so thick? Pentax had to make the K-01 deeper to accommodate the mounts of the older lenses, which weren’t designed for a mirrorless system.

The Pentax’s body is wrapped in a rubberized coating with thin ridges, which helps you keep the camera steady. On the right side is a rather loose-fitting compartment door with two small hinges. This is also rubberized, and doesn’t snap securely closed. We have our concerns about the longevity since the door covers frequently accessed ports including the SD card slot, A/V and mini HDMI outputs. There’s another small hinged door on the opposite side for a mic input.

As we mentioned, one of most appealing features of this CSC is its K-mount, which accepts multiple generations of Pentax lenses. If you’ve owned a Pentax camera and still have a glass collection, you’re in fine shape if you’re thinking about purchasing a Compact System Camera — at least in the lens department. Also on the front are stereo mics, an AF Assist lamp, remote sensor, a few logos and a nicely integrated lens release button.

On the top deck is the manual flash-up button, auto pop-up flash, hot shoe, extremely large mode dial, power switch, shutter, exposure compensation button and unlabeled green and red buttons. These two have different uses as you delve into the intricacies of the K-01, but naturally the red dot is primarily the movie record button, and green can be assigned to a specific task.

The mode dial is super-sized, which lets you readily read your options. It was nice seeing an HDR setting among the modes, since this is a great feature for static subjects. Along with PASM, there’s Bulb, No Flash, Movie and Scene (19 options). This gives you a hint that there’s a lot more to this camera than its rubberized skin. The supplied 270-page printed manual gives another clue as well.

The Auto setting is similar to the smart auto mode you might find on a point-and-shoot cam — it will adjust for nine different subjects in front of it. The Scene modes are pretty familiar (portrait, sunset and so on).

In the dedicated HDR mode, you have four levels of High Dynamic Range image capture. If you like things otherworldly, HDR 3 is cool, but like filters, it’s all a matter of your personal vision. A Night Scene HDR mode combines three bracketed images. The K-01 also has a nice palette of seven filters too such as Toy Camera, Retro and High Contrast, another option for really pumping up the color in your shots.

Mr. Newson didn’t go too wild with the back panel, although the keys and controls are nicely labeled. The main feature is the 3-inch LCD with 920K-pixel resolution, the standard level for higher-priced CSCs. You’ll also find typical buttons as well as a four-way controller with center OK button. It was good seeing direct access for ISO and white balance. A rotary E-dial on the right edge lets you make menu adjustments. It has a great feel compared to competitors.

The bottom of the assembled-in-the-Philippines camera has Marc Newson’s signature, a tripod mount and battery compartment. The battery is rated 540 shots per CIPA, which is a very good spec vis-a-vis the competition and comparable to a DSLR.

The $899 kit version of the K-01 gets you the camera body in the color of your choice, an unbelievably thin f/2.8 40mm lens (60mm 35mm equivalent), battery, charger with AC cord, USB cable and various caps. The CD-ROM has SilkyPix Developer Studio 3.0 software for handling RAW/DNG files on your computer. As a nice touch, the K-01 has in-camera RAW development, so you can do it in the field if you’d like. There’s also a fold-out quick guide along with a phonebook-sized operating manual in the carton.

We had the Pentax K-01 for several weeks, shooting stills and videos in New York City and New Jersey. We found the 40mm prime lens a nice change of pace. Instead of using the zoom to frame our shots, we used our feet to move in and out. The 60mm (35mm equivalent) was a nice view, even though we prefer wider-angle shooting. We shot RAW+JPEG as well as JPEG Fine (4352 x 3264 pixels) for stills, as well as video at the highest settings. Once done everything was reviewed on a computer for obligatory pixel-peeping, prints made, and we checked out the videos on a 50-inch 1080p HDTV.

Before getting into the specific results, let’s reiterate that we did not care for the feel of this camera. It’s really awkward — especially after just using the Nikon D3200 DSLR and Sony’s mirrorless NEX-F3. Again, you must do a hands-on with this camera unless you’re so enamored with the design it makes all other issues moot.

Beyond ergonomics, the K-01 is one noisy camera. The focusing motors practically scream as you press the shutter half-way. Also we really weren’t impressed with the K-01’s AF capability. In straight auto, we had difficulty getting the camera to zero in on the subject we desired; it seemed to pick something else in the frame. We had better luck using Select Focus, or simply going fully manual with the kit lens. Still, AF shouldn’t be an issue in an $800 camera.

Moving to a more positive feature, let’s discuss the 3-inch LCD display. This was a beauty, and there were few issues using it under a wide variety of lighting conditions. Pentax also did a nice job with the menu system. It works in a linear “nesting” style, but graphically shows which color buttons to push in order to make adjustments as you move through the modes. Although this camera has a toy-like vibe to it, there are tons of photographic tweaks at your fingertips — this is a real plus, as are the HDR options.

Toy look or not the K-01 is still an image-capture device – aka camera. Unfortunately, our photos were a mixed lot. When the sun, moon and stars aligned properly, the K-01 captured crisp images with very accurate colors with just the right amount of pop. We used Natural in the Custom Image palette, but there are 10 other options to suit your tastes. (Natural is our preferred setting when testing cameras.) We’ve detailed the problems we had with AF, so we won’t belabor the issue. The K-01 is a speedy shooter, however, as it grabs up to 6 frames per second in high-speed burst mode for full-resolution JPEGs; you can also set to it 3 fps. Don’t expect miracles or back-page sports highlights.

The Pentax K-01 has an ISO range of 100 to 12,800, typical of CSCs using larger APS-C imaging devices. Larger size really matters with camera sensors, and this one handled noise extremely well. We found little noise even at 1,600 for our test subject, and naturally the color began to shift and noise became far more apparent as we moved the E-dial to the maximum. You could get away with an image posted to the web at 12,800, which is pretty incredible. Still we’d keep it below 3,200. In fact, the camera has a range setting of 100 to 3,200, so that’s the adjustment we’d make, if we owned the camera. The K-01’s in-camera Shake Reduction (SR) system is quite effective, allowing us to handhold the camera at slow shutter speeds with minimal blur.

The Pentax K-01 captures 1080p videos at 30 fps using the MOV format. Although color was right on the money, the “jelly effect” when panning with the camera slowly was really bad. Static plants practically looked like they were doing a hula in certain scenes, even though there wasn’t a breeze anywhere. This was not good at all. We won’t go into our contrast detection versus phase detection rap again, but just be aware video quality here is below the competition.

We’ll give Pentax K-01 a passing grade — but just barely. Given the right circumstances, it grabs very nice stills. However, there are just too many negative issues. You have far better options at more palatable prices.