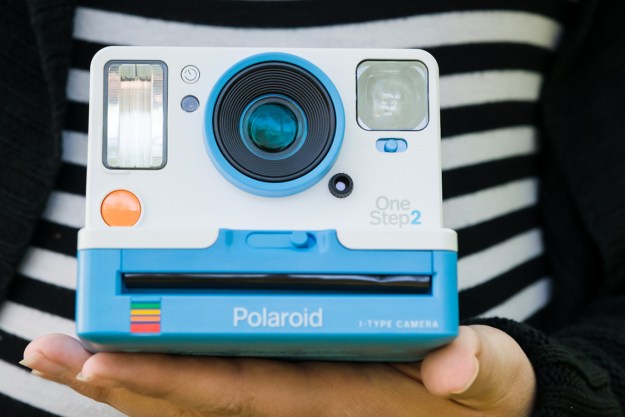 “For instant film lovers, the OneStep 2 brings back the style, and image quality, of the camera that started it all.”

Faux leather wraps, silver trim, and mechanical control dials bring a vintage look to some modern digital cameras — but those trends look like costume jewelry next to the Polaroid Originals OneStep 2. Designed after a 1970s era camera, the OneStep 2 both looks and shoots like a vintage Polaroid camera, spitting out the same instant film with that classic border.

But the OneStep 2 adds a handful of modern conveniences to the classic style, like a rechargeable battery, built-in flash, and — the epitome of post-2010 era camera — a selfie timer. Unlike digital cameras with a built-in Zink printer, the OneStep 2 uses actual instant film that generates that organic, imperfect look without relying on a wannabe digital filter.

But the 1970s aren’t for everybody. Even with its modern refinements, the Polaroid OneStep 2 remains a very old-school camera that lacks the convenience and quality of modern digital cameras. Whether the experience is enjoyable or frustrating depends on who is shooting it.

Based on the 1977 Polaroid OneStep Land Camera, the remake for Polaroid Originals keeps the same general body shape and aesthetic while adding a few more modern features. That 70s-era inspiration makes for a bulky design that weighs in at a pound and measures nearly 6 inches at the longest point. An included neck strap can be looped through the back to help tote the camera around, since you’d have to be wearing clown pants to fit it in a pocket. Of course, without that body style, the camera just wouldn’t be a OneStep.

While cameras using Fujifilm Mini instant film have a smaller profile, the OneStep probably can’t shed too many inches while still leaving room for the film pack. The i-Type 600 Polaroid film designed for the new OneStep cameras — which has the same dimensions as traditional Polaroid instant film, but is a bit thicker — measures roughly 3.1 by 3 inches for the photo area and about 4.2 by 3.5 inches overall. Fujifilm Instax Mini, in comparison, creates a smaller print with an image size that’s about 1.8 inches by 2.4 inches.

The film slides into the base of the camera, opened by a small lever at the front. The directions for loading the film pack are written right on the cartridge, making it easy to load even for users unfamiliar with instant film. The cartridge slides in with a satisfying click, and the camera automatically spits out the black cover paper.

The USB port at the back is a dead giveaway for the modern camera masquerading as a 1970s edition.

At the top of the camera, a set of eight mini lights indicates how many images are left in the film pack.

As an instant film camera, the OneStep 2 uses a fairly minimalist control scheme, though has a few more options than the 1970s original. The shutter release sits at the front towards the bottom — which feels odd, as most modern cameras put it on the top — which remains true to the original.

With your left hand supporting the camera and your right index finger on the shutter button, you’ll find your thumb rests against the no-flash button. Pressing and holding that button while taking a picture suppresses the flash, which is otherwise always left on. The flash itself is a new addition to the camera — the 1977 model had the option to add a flash on the top, but didn’t house a built-in flash.

The camera’s modernity is also obvious in the small self-timer button on the front for triggering an instant film selfie. A switch below the viewfinder on the front allows for brightening or darkening the image, another feature not on the original camera.

Polaroid warns in the user manual that the viewfinder isn’t 100 percent accurate — it’s not a through-the-lens viewfinder — especially when close to the subject. The viewfinder feels a bit like looking through a bubble — the center of the image bends towards you as if magnified, while the edges are blurred.

But the biggest giveaway that this isn’t a 1977 OneStep is the USB port at the back of the camera. You won’t be using that to transfer images to your computer, of course, but it how you charge the battery. You shouldn’t have to do that too often, however, as Polaroid says the camera will hold a charge for 60 days.

Shooting with the Polaroid Originals OneStep 2

There’s one big reason to bring back a 1970s camera — the sheer joy of it. Shooting a photo that you can hold in your hands, a photo that you actually have to wait for, feels oddly delightful in a digital world. Images aren’t snapped and then forgotten among the thousands of others in your phone, but hung on a fridge or tacked onto a photo album. If different is fun, then the OneStep 2 is a blast.

There’s one big reason to bring back a 1970s camera — the sheer joy of it.

In the age of digital, describing the OneStep 2 as an “instant” camera is nearly a misnomer. Yes, you can hold the image in your hands within a few seconds, but images take about 10 to 15 minutes to fully develop. The film should also be kept face down during that time to avoid wrecking it, or could be left sitting in the camera underneath the black protective piece that unrolls to keep each image protected. The wait time is only frustrating when after 15 minutes you realize you need to reshoot an image that came out too light or too dark.

Stamped right on the bottom of the camera is the suggestion to keep at least 2 feet away from your subject. The fixed-focus lens is rated for 2 feet to infinity; get too close, and the images will be soft. Indoors, the flash is also far too bright for objects that close. Other suggestions etched on the camera recommend shooting with the sun behind you and always leaving the flash on unless shooting in an ultra bright scene.

The instant camera is simple enough to use that my 6-year-old had fun snapping a photo with it (although, it was a bit too large for my four-year-olds hands). And while adults will enjoy the camera, too, instant film is a fun way to teach kids photography, and demonstrate that some things are worth waiting for.

The OneStep 2 experience is very basic — yet the camera forces you to slow down, because every single photo you snap costs money. With eight exposures in a pack, the instant camera helps turn you into a more conscientious composer, as extra snaps equal wasted cash. That’s great for honing your eye for composition, but it’s also another point of frustration.

While the film cartridges are remade for the new camera (i-Type film is not compatible with older Polaroids), the same aesthetic remains.

That film look is most obvious in the colors. Greens, for example, are darker and less saturated than how the scene looks to your eye. The images already feel like they’ve been treated with an Instagram filter.

Images overall tended to err on the darker side, even when shooting outdoors. The underexposure may be part of the aesthetic, but you can use the +/- switch on the front of the camera to lighten the images a bit if a brighter exposure is more your style. There are no true manual settings, however.

Unfortunately, the flare isn’t an artsy, rainbow-style effect, but a white blob at the edge of the photo.

Of course, the image quality isn’t “good” by any modern metric, but that’s part of the “perfect imperfection” that Polaroid Originals says makes an instant film picture. Images are always a bit soft, which sometimes complements the desaturated aesthetic, but can also obscure some of the best parts of the scene.

If you shoot towards the light — going agains the recommendations — the lens sometimes flares and causes portions of the photo to blow out. Unfortunately, the flare isn’t an artsy, rainbow-style effect, but a white blob at the edge of the photo. You can usually tell through the viewfinder when this is going to happen, and can even prevent it by shielding the lens with one hand, a sort of makeshift lens hood, but this isn’t always easy to do and you risk getting your hand in the photo if you’re not careful.

Indoors, Polaroid says the built-in flash helps to color balance the images, but we still found the shots to be a bit too yellow. Of course, maybe that’s desirable as part of the 1970s look and feel.

Selling for around $100, or a little bit more if you pick a special edition, the OneStep 2 is one of the more affordable Instant cameras on the market and, with both the original Polaroid film dimensions and the look of the camera, arguably one of the most retro. The trade-off, however, is a larger, bulky body.

The i-Type film retails for $45 for a three-pack for the basic film with a white frame, and a little more for black-and-white film or special editions with different colored borders (the Stranger Things “upside down” special edition camera and film is one of our favorites). That amounts to around $1.87 per photograph. By comparison, the Fujifilm Instax mini only costs around 80 cents a shot, or 58 cents a shot if you pick up a larger pack of 60 exposures. Like we noted in previous instant camera reviews, there’s a lot of one-time-use plastics that come with a film cartridge to consider as well.

Thanks to a resurgence in popularity, finding an instant film camera isn’t hard to do. The Polaroid Originals OneStep+ ($140) offers a similar design and image quality, but adds Bluetooth and allows you to remotely trigger the camera with a smartphone, as well as manually adjusting some of those exposure settings beyond a simple +/- switch.

Polaroid Originals, of course, holds the rights to that Polaroid-sized instant film — other instant cameras tend to use Fujifilm Instax Mini, which produces an even smaller print. Most of these cameras also have a smaller profile than the OneStep 2. The Leica Sofort has one of the sleekest designs but retails for around $280. The Fujifilm Instax Mini 90 ($140) keeps a retro-inspired but smaller body and offers manual control settings to avoid shots that are too bright or too dark. Or, to go really retro, the Mint InstantFlex TL70 2.0 ($389) looks like an old twin lens camera but works with Fujifilm Instax Mini. And for the best of both, the Fujifilm SQ10 ($120) captures both digitals and instant film using Fujifilm Square film.

Considering you can still buy a decades old film camera and use it, the Polaroid OneStep 2 likely has a long lifespan. It’s a plastic camera that isn’t sealed against the elements, but we expect it will last for years to come if taken care of.

Yes. This camera is a nostalgia play, but a good one. The OneStep 2 offers the genuine Polaroid look, and it’s fun to use at the same time. Just remember that the per-photo cost is extremely high. You’ll only end up using this on rare occasions.

The DJI Osmo Action 3 looks nothing like the Action 2
GoPro Hero 11 Black leak suggests a moderate upgrade
Astronaut reveals source of ‘intriguing’ bright light on Earth
The best iPhone tripods for 2022
Netflix sheds light on its ‘approved cameras’ for filmmakers
Best Prime Day Drone Deals 2022: What to expect this week
How to remove the background from an image
Instagram boss says to expect even more video content
6 awesome Earth images captured from the ISS in July
This GoPro Hero 10 bundle is $100 off at Best Buy today
Watch this Mavic 3 drone soar above the world’s highest mountain
How to watch DJI unveil an all-new drone today
DJI Avata vs. DJI FPV: Which first-person drone is best for you?