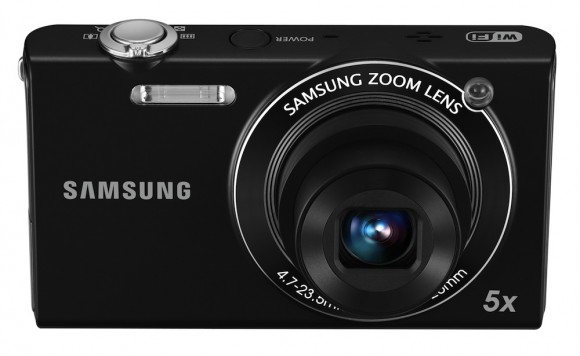 With omni-connected smartphones quickly usurping traditional cameras as the popular choice for amateur photography, Samsung has announced a new camera that should appeal to those who’ve grown accustomed to being able to send and share photos instantly. The SH100 will feature Wi-Fi connectivity to let users directly upload photographs and HD videos to social networks like Facebook, photo-sharing sites such as Picasa, or send them directly through an e-mail account.

Samsung says the SH100 will also feature a back-up setting in which new photographs and videos will be automatically downloaded to a PC through a Wi-FI connection — even if the computer is powered down. Owners of DLNA-compatible HD TVs will be able to send photos and video directly to their sets for instant exhibitions.

Extending the SH100’s Wi-Fi capabilities even further is a remote shutter release feature that will turn smartphones into remote controls. So for a group shot, the photographer will be able to position the camera and then join the group and snap the picture remotely through a mobile device.  The smartphone can also be used to make last minute zoom adjustments, as well. It’s not clear if the feature will only be available for users of Samsung’s Galaxy S or be available across a range of smartphone devices and operating systems.

Samsung says the SH100 will also employ a smartphone-esque, touch-based user interface complete with apps to drag about and rearrange.

Wi-Fi aside, the camera looks to be a relatively normal compact camera. There’s a somewhat slow f 4.7 lens, but a substantial 14.2 megapixel sensor.

Topics
Best Cyber Monday Deals 2022: Laptops, TVs, AirPods, and more
This Polaroid-style Fujifilm instant camera is $49 for Cyber Monday
GoPro Hero 11 Cyber Monday deal knocks $100 off the price
Sony A7 III mirorless camera is $300 off for Black Friday
How to remove the background from an image
Instagram boss says to expect even more video content
6 awesome Earth images captured from the ISS in July
This GoPro Hero 10 bundle is $100 off at Best Buy today
The best iPhone tripods for 2022
Watch this Mavic 3 drone soar above the world’s highest mountain
How to watch DJI unveil an all-new drone today
DJI Avata vs. DJI FPV: Which first-person drone is best for you?
Astronaut reveals source of ‘intriguing’ bright light on Earth