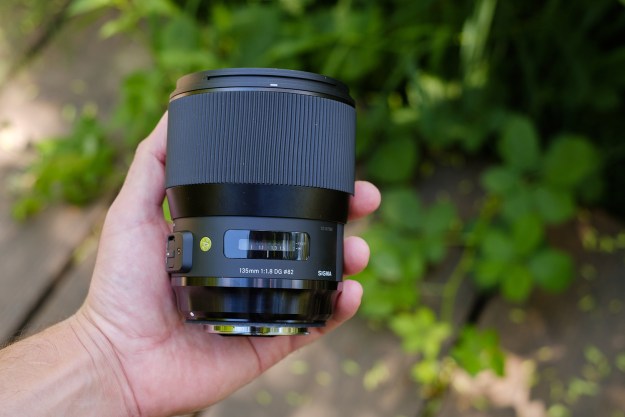 “Long ignored by Canon and Nikon, Sigma proves it has what it takes to revitalize the 135mm portrait lens.”

It should come as no surprise that Sigma’s new 135mm F1.8 DG HSM lens is very, very good. It is the latest in the company’s highly respected line of Art lenses, and with each new model, Sigma again proves that it knows how to make remarkable glass. Its Art series continues to compete not just with the best that Nikon and Canon have to offer, but even stands up against the likes of expensive specialty lenses like the Zeiss Otus line.

The Sigma 135mm F1.8 is a modern take on a classic portrait focal length that Canon and Nikon haven’t updated since the 1990s. While those first-party lenses still hold up well today (and are still available new), the lack of a truly modern 135mm portrait lens has left a void for Sigma to step into – and it did so with a giant leap. Sigma’s 135mm F1.8 is one of the sharpest lenses we’ve ever used, even when shot wide open. It’s the type of performance one would expect from a lens costing much more than the relatively modest price of $1,399. Sure, that isn’t exactly cheap, but this is a lens that can handle the workload of the most demanding professional user.

The first thing you will notice about this lens is how heavy it is. While only a 1/3-stop brighter than Canon’s 135mm f/2, the Sigma weighs nearly a pound more, at 2.49 pounds compared to the Canon’s 1.65. The weight and bulk contribute to a premium feel, and indeed the lens is very well constructed, with a brass mount that is splash and dust resistant. The lens is available in Canon EF, Nikon F, and Sigma SA mounts. There is no native Sony E-mount version, but Sigma sells an adapter that will allow Sony users to attach Sigma EF-mount lenses.

Part of the added weight is from the significantly larger front element, which necessitates an 82mm filter thread compared to the 72mm thread diameters on the Canon and Nikon lenses. That means adding a filter to the 135mm Art will be more expensive (an 82mm Hoya HD3 circular polarizer is about $224, compared to just $175 for a 72mm version).

On the barrel, you will find two switches that control how the lens focuses. The AF/MF switch turns autofocus on or off, but AF can be overridden manually at any time just by rotating the focus ring. The second switch is the focus limiter, which can be set to 0.875m to 1.5m, 1.5m to infinity, or full. Limiting the focus range based on your subject distance could help improve AF speed, although we had no issues whatsoever with it in the default full range. The lens uses Sigma’s latest Hyper Sonic Motor for fast and smooth autofocus, and – as we’ve seen on other Sigma glass – it works really well, with performance that rivals first-party lenses. It even features an accelerometer that detects the orientation of the lens, allowing it to maintain focusing performance as the load on the focusing group changes due to gravity when switching from landscape to portrait orientation and vice versa.

Internally, the lens is made up of 13 elements in 10 groups with two “F” Low Dispersion (FLD) and two Special Low Dispersion (SLD) elements. Sigma says its FLD elements mimic the refractive performance of fluorite – a mineral commonly found in high-end lenses – but at a lower cost. The aperture diaphragm is made of nine blades that are curved to provide a circular (or close to circular) iris at all f-stops, helping ensure a natural looking bokeh even when not shooting wide open. (Of note for Nikon users, that aperture is also electronically driven, like the latest generation of Nikon lenses, which should offer better performance under high speed continuous shooting.)

We used the lens on a Canon EOS 6D, a full-frame camera with a 20-megapixel sensor. While the 6D is a capable performer, Sigma claims the 135mm Art was built with 50MP sensors in mind – so Canon EOS 5DS, Nikon D810, and Sony A7R II (with adapter) shooters should be able to put this lens to good use.

While we shot a few landscape, still life, and nature photos, we spent the bulk of our time with the lens shooting what it was obviously designed to do best: portraits. The lens is perhaps more versatile than it would seem, but it is portraiture where it really shines. As we’ve already stated, it is very sharp and clearly optimized to be used wide-open. Other than increasing depth of field, there is little benefit to stopping down. There is a hint of chromatic aberration at f/1.8, but it is very well managed and we did not find it to be distracting at all in real world use.

However, just because you can get sharp results wide open doesn’t mean you shouldn’t ever use smaller apertures. At f/1.8, the depth of field is so shallow that unless you’re using a tripod, there’s a good chance you won’t be able to nail critical focus. Handheld, the weight of the lens – combined with the lack of image stabilization – can make it a bit unwieldy, and any amount of motion will alter your focal plane. The effect is more pronounced the closer you are to your subject, but at a typical portrait distance, just breathing is enough to shift the focus away from where you need it.

The good news is that the lens produces absolutely beautiful images at virtually any aperture. For portraiture, shooting in the f/2.8 to f/4 range will produce a sufficiently shallow depth of field to clearly isolate your subject. Subjectively, the way the lens renders background blur is very pleasing even at these smaller apertures, so there’s little reason to shoot wide open unless you’re working in a dimly lit setting. Handheld, we found sticking around f/2.8 to be the real sweet spot, where we had just enough depth of field to keep our subject easily in focus while still creating the creamy bokeh that lenses like this are known for.

One of the sharpest lenses we’ve ever used, even when shot wide open.

This does beg the question: Why did Sigma decide to go with f/1.8 rather than the more common f/2 for this focal length? The difference in both light-gathering capability and depth of field is minimal, but the f/2 lenses out there are smaller and lighter. For Canon users, this means choosing between the sharper (at least, when wide-open) Sigma and the cheaper, more compact Canon 135mm f/2L. We would still put our money on the Sigma, but the choice is likely worth some deliberation for most photographers.

On the Nikon side, the decision favors the Sigma: Nikon’s AF-DC 135mm f/2D, first released in 1990, is even older than the Canon. While it is also more compact than the Sigma – and includes the unique “defocus control” ability – it relies on a slower screw-drive AF system and mechanically driven aperture. It’s also priced within $10 of the Sigma, so there’s no real savings to be had.

All of this said, it’s not as if Sigma is without competition. When it comes to portrait primes, 135mm is just one of many available focal lengths. In fact, one could argue that an 85mm or 105mm offers a much more usable working distance, especially for indoor shoots where space may be limited. The flattering telephoto compression effect of a 135mm is hard to beat, but it’s not the be all and end all. Nikon’s relatively new 105mm f/1.4E, for example, is a stunning lens with great performance across the aperture range – but it does cost $2,200. Nikon and Canon both make some very nice 85s, as well, and Sigma’s own 85mm f/1.4 Art is very well regarded. That lens even comes in a bit cheaper than the 135mm at $1,200.

The Sigma 135mm F1.8 Art, therefore, is another great option in a rather expansive set of available portrait primes. We could see it being particularly useful to wedding and concert photographers, who often need both good low-light ability and long reach. For more flexible types of photo shoots, we wouldn’t necessarily recommend it over an 85mm, but it does offer a unique look that will undoubtedly be a good complement to any photographer’s existing arsenal of glass.

Sigma offers a four-year limited warranty on all of its lenses.

The Sigma 135mm F1.8 DG HSM Art is a stunning example of optical design. It is technically proficient in every metric of performance, but more importantly, it produces images that are simply beautiful to look at. Working with a 135mm is more difficult than shorter focal lengths, and the lack of image stabilization makes it trickier to use handheld, but we still very much enjoyed the experience of shooting with this lens. Without a doubt, Sigma has another winner on its hands and has proved once again that the success of its first Art series lens (back in 2012) wasn’t just a fluke. The company has cemented itself as a high-quality lens maker – for any Canon or Nikon users still on the fence about Sigma, it’s time to let go.

This is probably the best 135mm lens currently on the market, but it’s not without competition. On the Canon side, the EF 135mm f/2L costs just $999 and is smaller and lighter. The Nikon AF-DC 135mm f/2D is a living classic, but arguably outmoded by its lack of a modern AF system. For the highest-end Nikon shooters, however, the AF-S 105mm f/1.4E presents a compelling alternative, albeit it at a $900 premium over the Sigma.

This lens is built incredibly well, with performance that meets the demands of today’s highest-resolution sensors. We have no doubt it will outlive whatever camera you put it on – good lenses tend to have longer shelf lives – and see no reason to expect it to be replaced for many years to come.

Yes, especially if the 135mm focal length fills a gap in your lens collection. This is a fantastic lens and a great value at $1,399, despite being more expensive than its most direct competition. However, if you’re looking for a first portrait prime, we might caution you to start with a wider focal length – like 85mm – as you will likely find that to be more flexible and easier to work with. If you do end up with the 135mm F1.8 Art, however, you certainly won’t be disappointed. Again, this is one of the best lenses we’ve ever used.