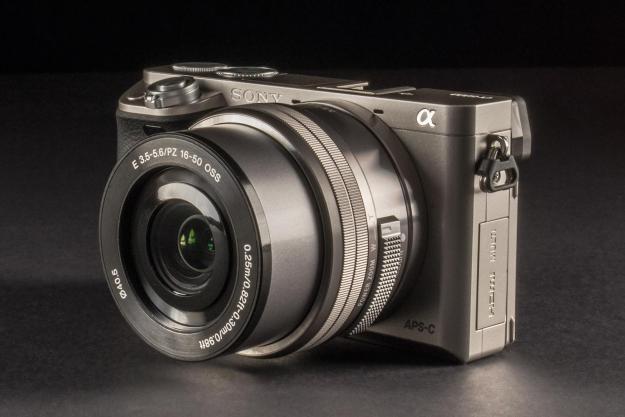 “With the latest enhancements, Sony’s new Alpha A6000 is one of the best CSCs you can buy.”

Sony’s newest compact system camera (CSC) has been eagerly anticipated by mirrorless fans, if chat rooms and forums are any indication. The follow-up to the highly acclaimed NEX-6, the Alpha A6000 has a higher-megapixel 24.3MP APS-C sensor, speedy response, enhanced autofocusing, and, what could be its most impressive feature, a very fast burst mode. Is this sub-$700 really as impressive as it seems? It is, so keep reading to find out why we’re singing praises.

Sony may have dropped the NEX moniker from its mirrorless cameras, which was used to distinguish them from the DSLRs. Opting for the shared “Alpha” branding, the A6000, at first glance, seems like nothing but a name change from the soon-to-be-discontinued 16.1-megapixel NEX-6, a DT Editors’ Choice. Look a little closer and you’ll notice Sony added a second command dial on the top deck, making it easier to adjust parameters of all types. This is a real-world plus. Our review sample was primarily silver with a black textured grip, but it’s also available in an all-black version. The grip feels comfortable in the hands but it’s not one-size-fits-all for every user – definitely try it out in person. The A6000 weighs 12.1 ounces with the battery, measuring 4.75 x 2.87 x 1.7 inches, just slightly less than the NEX-6. The camera feels okay, but doesn’t have the solid heft of the recently reviewed $800 Canon PowerShot G1X Mark II or $1,400 Fujifilm X-E2.

The A6000 is a fun camera to shoot with, with main controls readily available.

The key feature on the front is the Sony E-mount. The kit glass is a 16-50mm OSS f/3.5-5.6 Power Zoom, which is an acceptable starter lens (24-75mm equivalent). Sony has 17 E-mount lens options, while third-party glass is available from Sigma, Samyang, Tamron, and Zeiss. In other words, there’s a good selection of primes and zooms available, ranging from the affordable to north of $1,000. Also on the front are stereo mics for the AVCHD 1080/60p videos, the AF Assist lamp, and a lens release button.

The top deck has a hot shoe, a pop-up flash, and the mode and command dials. On the grip is the on/off lever, shutter, and C1 button. Focus is the default function for this key but it can be customized as you wish; the same holds true for C2 on the rear of the camera.

On the back is a 0.39-inch OLED electronic viewfinder rated 1,444K dots. It’s a good one and can be brightened if needed. It’s not nearly as fine as the OLED EVF found on the X-E2, but that camera also costs more than a grand. Your other viewing option is a tilting 3-inch LCD rated 921K dots. Touchscreen capability would’ve been a really nice addition but this display is very high quality, handling direct sunshine with few issues.

Next to the EVF are the diopter control, flash button, and AEL button. On the far right is a recessed red-dot video button. It’s a bit small and requires a press with the fingernail; it was probably designed that way to avoid accidental recording, but we’d like to see it on the top plate, near the command dial. To the right of the LCD is the FN (Function) key which gives direct access to various shooting parameters that change when you move the mode dial. It’s an easily navigable system so practically anyone can make the most of this camera. Nearby is a scroll wheel with a center OK button. Hit the four corners and there’s access to Display, ISO, Exposure Compensation, and Burst mode. The final keys are Playback and aforementioned C2.

On the right side is the near-field communication (NFC) tag, while on the left is a compartment for USB and HDMI outs. On the bottom are the three-pinhole mono speaker and battery/memory card compartment.

The battery is rated a fairly standard 360 shots for mirrorless models, and charges in-camera; remember to plug it in every night before use, if you don’t want to purchase a spare battery.

If you purchase the $749 package you get the camera body and aforementioned 16-50mm Power Zoom lens. You also get a rechargeable battery, AC adapter, USB cable, eyepiece cup (to go over the viewfinder), body cap, and shoulder strap. Also in the box are a 48-page instruction manual and a Wi-Fi guide. Like many companies, Sony no longer supplies a software CD – you download what you need from Sony’s website. (If you plan to pair the camera with a smart device, you’ll need to download the PlayMemories Mobile from either the Google Play Store (Android) or iTunes App Store (iOS).

Sony offers a limited one-year warranty, but the company also offers an extended service plan called Protection Plus for the accident prone.

We’ve used Sony’s mirrorless CSCs since the beginning (July 2010), so the new Alpha A6000 was quite familiar, even without the NEX imprint. Fortunately, Sony has taken a major step away from the original menu system to one that’s much more linear and works in conjunction with standard mode and command dials. The learning curve for this one should be about 3 seconds.

Sony has abandoned the original NEX menu system to one that’s much more simple to follow.

The main mode dial has the usual Sony shooting options: Intelligent Auto, Superior Auto, PASM, Memory Recall (custom), Movie, Sweep Panorama, and Scene (nine options, such as Portrait, Landscape, Sunset, et al). In aperture priority, for example, you just turn either of the jog wheels (top/back) to make adjustments. There’s a good selection of onscreen displays to help as you go along. Again, this is a far cry from the original NEX menu system and something to be welcomed by shutterbugs of all stripes.

The A6000 has a 24.3-megapixel APS-C sensor versus the NEX-6’s 16.1MP. It also has Sony’s newest BIONZ X processor that’s found in the much more expensive A7 series. Another major improvement is the AF system. The A6000 uses a hybrid autofocus system, as do most higher-end CSCs, but the claim for the new Alpha is pretty bold: Sony states it has the world’s fastest AF of .06 seconds (Fujifilm boasted its X-T1 had the fastest speed at .08 seconds when introduced, only to be shattered by Sony a few weeks later; Nikon, however, is also making claims to this title with its new Nikon 1 cameras). Can we measure such claims? Hardly. However, the new Sony system consists of 179 phase detection AF points and 25 contrast detection points (the NEX-6 offers 99 PD and 25 CD). What this numbers game boils down to is a camera that rarely grabs for focus. The burst rate is a sizzling 11 frames per second (fps).

After charging the battery and loading a 64GB SanDisk Extreme Pro SDXC card, it was time to put the camera through its paces. Maximum still resolution was 6000 x 4000 pixels (JPEG/RAW) while videos are 1080/60p (AVCHD format) with stereo sound. We started off in Superior Auto, then switched to other available options. Since the camera is such a theoretical speed demon we took the camera to a nearby lake to capture the fast action of speedboats and water skiers.

The A6000 is fun to shoot with. Main controls were readily available, the menu was simple to follow, and the LCD held up very well, even out on the water in bright sunshine. Our biggest issue was the inherent limitation of the kit lens. Don’t get us wrong – the power zoom reacts quickly – but a maximum telephoto setting of 75mm isn’t going to cut it in many situations. Now, it’s fine for photographing people and cats up close, as well as scenic vistas, but in many instances we had to shoot and pray because subjects were too far away. This was especially true for water skiers and boats zooming by. For obvious safety reasons we couldn’t get too close.

It’s the very rare camera that performs well at the five-digit ISO level.

Luckily, it seems a lot of our prayers were answered, after enlarging the images on a 27-inch monitor. Shooting at 11 fps, the A6000 did a very good job freezing the action. When we did our enlargements we could see details unnoticed while framing the shots with the LCD and EVF. And for more static subjects, the sensor delivered the photographic goods: We were pleased with color accuracy and richness, but know if we had higher-quality glass like Fujifilm’s 18-55mm kit lens, results would’ve been even better. Even with that caveat, most photographers will be very happy with the results. Just think of the 16-50mm as a starting point toward future lenses.

Movie quality is also top-notch. Since POV clips are so popular we had a great time shooting videos as our speed boat bounced along the wakes and waves. Sony’s optical image stabilization did a fine job keeping things as bounce-free as possible even as we almost fell overboard! You’ll like the quality of the AVCHD 60p clips even though they are more difficult to transfer and edit than MOV files. The PlayMemories Home software provides basic tools to handle these chores.

The camera has a native ISO of 100-25,600; it hits 51,200 in Multi Frame Noise Reduction feature, something you cannot adjust. From our many tests, it’s the very rare camera that performs well at the five-digit level. The A6000 was solid to ISO 800, and then gradually added noise at the next few stops. Speckles and color shifts were much more noticeable at 6,400, while 12,800 and 25,600 were barely useable. Not a total disaster but nothing you’d like to share with your friends. This is another reason to opt for wide aperture prime lenses if you like shooting in available light. And if you use the kit lens, make sure you don’t radically push sensitivity levels.

Sony has Wi-Fi down pat on its cameras. Once you download PlayMemories Mobile to your smartphone, go into the Wireless section of the A6000’s menu system. Just enter the password found on your camera in the required field on your phone. Once paired, you can send images between the devices, your PC, or Wi-Fi-enabled HDTV. Along with Wi-Fi, there’s NFC connectivity as well, which lets you easily and quickly pair with another defice. Besides this free app, Sony has PlayMemories Online, a free Cloud storage service.

This shouldn’t come as a surprise: We gave the NEX-6 an Editor’s Choice, and with higher resolution, faster burst mode, and improved AF and menu system the A6000 gets one too. A touchscreen LCD really would’ve made the package even better, as would relocating the video record button, but we can’t have everything. If it were our money, however, we suggest you purchase just the body, and then buy higher-end primes and zooms that suit your photographic vision. This way you’ll maximize that 24.3MP APS-C sensor and have one of the best sub-$700 CSCs available.