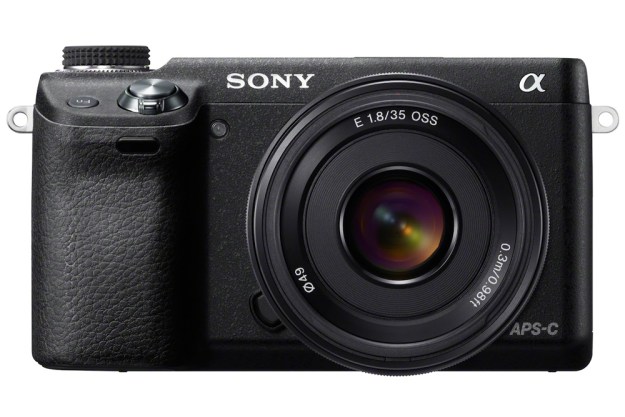 “The Sony NEX-6 is a superior Compact System Camera we highly recommend.”

Despite the camera industry lamenting that smartphones are killing them, there are pockets of prosperity, namely interchangeable lens systems like Compact System Cameras (mirrorless) and DSLRs. The 16.1-megapixel Sony Alpha NEX-6 CSC is one model that shows why cameras are far from extinct and why people would be willing to spend a grand to capture superior photos and videos.

We’ve followed and reviewed Sony’s myriad mirrorless cameras over the years, liking many including the NEX-7 and, now, this one. The NEX-6 has numerous positives, but there are a few shortcomings that keep it from reaching near-perfection. The Wi-Fi, for example, can’t compare to a Motorola Droid 4 when it comes to posting on Facebook.

The NEX-6 has a decided rangefinder feel with its various dials and viewfinder. Although CSCs were originally designed to be small cameras with as few buttons and dials as possible, one or two here isn’t such a bad thing because Sony’s menu system can be obtuse at times.

The main feature on the front is the E-mount 16-50mm f/3.5-5.6 power zoom lens with optical image stabilization, the kit glass for the camera. With a focal range of 24-75mm (35mm equivalent), it’s a good basic lens with a nice smooth feel as you move from wide angle to tele (Sony has a slew of add-on lenses that includes a new 18-200mm [27-350mm] for a cool $1,200). A nice benefit is the NEX-6’s compact size that lets you easily shove the entire rig – body and lens – into a large pocket. When detached, the power zoom lens is much thinner than the usual manual 18-55mm lens supplied with other NEX cameras. Overall it measures 4.75 x 2.75 x 1.1 inches and weighs 12.2 ounces with battery and card. This is no backbreaker and fun to carry around on a 24/7 basis.

The camera has a reasonably deep grip with a textured finish. It was comfy for our hands but, as always, we strongly recommend you do your own hands-on at a local retailer. Other features of note on the front are two pinhole mics for stereo sound and an AF Assist lamp.

The top deck has a Multi-Interface Shoe for accessories such as add-on mics. The nice thing about this hot shoe is that it accepts Sony’s Handycam accessories. Next to it is a pop-up flash and the DSLR-like mode dial where you can quickly move into P/A/S/M and two types of no-brainer (automatic) shooting, as well as access Scene options and Sweep Panorama (one of the easiest ways to capture horizontal or vertical panoramas). There’s no Movie setting – to access video capture, you simply press the red-dotted record button on the right rear edge of the camera, regardless of the mode you are in. Along with 16.1-megapixel stills, the NEX-6 captures AVCHD Progressive (1080/60p) clips – about as good as it gets for a consumer-level imaging device.

The back has two excellent features: a half-inch 2,359K OLED electronic viewfinder (EVF) and a tilting 3-inch 921K LCD screen. The EVF is the same as the one found in the higher-priced NEX-7 and it lets you see your subjects very clearly. If you make any adjustments to exposure compensation, white balance, Picture Effects, and so on, you’ll see the results in real time, something optical viewfinders on DSLRs can’t do. The LCD is also solid but isn’t a full vari-angle (you can’t flip it out and twist it around completely), but it tilts just enough to let you can shoot overhead or waist high. It isn’t a touchscreen, a real miss when you need to set up Wi-Fi pairing.

To the right of the screen is a jog wheel with center OK button. They give access to important parameters such as ISO, exposure compensation, and burst mode. To make other adjustments you have to go into Sony’s menu system which takes some time to learn. Not that making tweaks is difficult using the soft keys but figuring out what’s under Camera or Brightness/Color and what is the FN (Function) key near the shutter controls takes a bit of trial and error. Once you’ve used it long enough, things became more comfortable and second nature.

On the bottom is the battery compartment and dual card slots (Memory Stick and SD); the battery is rated a solid 350 shots and we had no unexpected dead camera issues even after extensive shooting with and without the flash.

If you purchase the kit, you’ll get the camera, power zoom lens, battery, and AC adapter. Rather than a plug-in charger for the battery, you juice up the camera directly via the adapter or USB (cable supplied). You also get various straps, caps, cups, a getting-started guide, and a CD-ROM containing the full manual as well as software for handling files.

The NEX-6 has a 16.1MP APS-C sensor, the same size as most DSLRs, so image quality is not an issue. It also has similar specs to larger ILCs such as 100-25,600 ISO and shutter speeds of 30-1/4000th of a second. The basic burst mode is 3 frames per second plus you can rattle off 10 fps in Speed Priority mode and AF will follow the subject. The NEX-6 is one of the few CSCs that can actually do that.

We tested the NEX-6 for well over a month, taking it with us to Las Vegas, Scottsdale, Ariz., plus our usual scenes in the Garden State, so we really got an excellent feel for the camera. Let’s get the bad stuff out of the way: Sony states the camera has a new hybrid AF system that combines 99-point Phase Detection and 25-point Contrast Detection. The result is supposed to be much quicker response than traditional CSCs using only Contrast Detection AF. While this was true the vast majority of the time, there were certain occasions when the camera did not focus properly. Over the course of nearly 1,000 images this occurred a handful of times. It’s not a deal breaker but a surprising glitch.

Another hassle was the Wi-Fi: Entering network-access security passwords with a virtual keyboard that you can’t access onscreen is not one of our favorite pastimes. And working with the new Play Memories Mobile – Sony’s smartphone app for iOS and Android that lets you transfer images, upload to YouTube or Facebook, and control the camera remotely – is not a joy. We’ll give Sony props for trying to link smartphones/tablets with the NEX-6 but for fast Facebook posts, our Droid 4 4G LTE phone wins by a mile. Dare we take a contrarian stance and say built-in Wi-Fi for sophisticated cameras is a bit of lipstick on a racehorse? When it comes to instant sharing, the smartphone still leads.

For our tests, we used the NEX-6 under a variety of different lighting situations. The camera was set to maximum resolution (JPEG+RAW) as were the videos (1080/60p). Everything was reviewed on a 27-inch Windows 8 Dell XPS One (a lot of fun pixel-peeping here) as well as a 50-inch HDTV. Prints were also made.

The NEX-6 is a pleasure to shoot with. It has a really good feel with controls in convenient locations. The menu system can be confusing at times but for the most part it worked well. The power zoom toggle reacts very quickly and it takes little time traversing the entire focal length. The kit glass may not have telephoto power but it does have a very good built-in optical stabilization system that did a fine job reducing shakes in stills, movies, and panoramas.

Whether it was a handheld shot taken at night or of the Arizona sunshine, images were ridiculously sharp. The NEX-6 renders colors very accurately. We shot at the default sRGB settings and were very pleased with the results. Granted, it doesn’t have the detail of a full-frame DSLR when you make 100-percent enlargements or larger, but then again those cameras cost at least twice as much. We can safely say you’ll like the photographs taken by this CSC.

The camera has an ISO range of 100-25,600. In our tests, there was very little noise until you reached 3,200. Amazingly the camera held up well at 25,600; sure, there were speckles and color shifts at that level but the photo was usable. You cannot say this about any point-and-shoot and many competing ILCs. Don’t expect to capture a fast-moving black cat in a dark room, but the low-light capability of the NEX-6 is quite impressive.

Videos are very good, too, offering AVCHD Progressive or MP4 formats. Movies shot outdoors were on par with stills. When you moved indoors, however, there was a bit of moiré patterning in portions of the frame and digital noise was more of an issue. Also, the mics pick up the sound of the power zoom so be judicious with the toggle switch as you record, unless there’s enough ambient noise to mask it. Even with these issues, movie making is much simpler than dealing with the AF and Live View problems of most DSLRs.

The Sony NEX-6 is a superior Compact System Camera we highly recommend. It delivers high-quality stills and videos. Like every digicam on the planet, it’s not perfect, but if you’re cognizant of its few limitations and can deal with them, you’ll be a happy photographer/videographer.