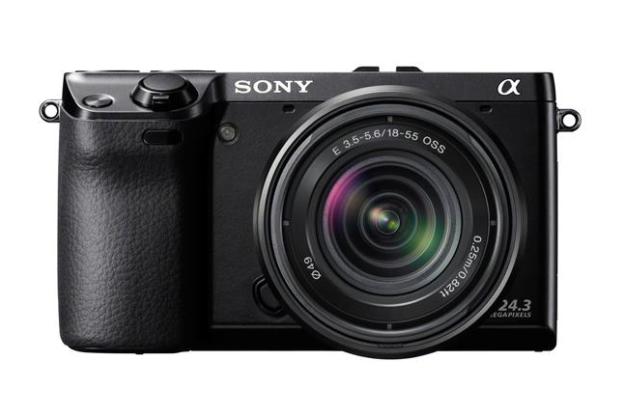 “If you’re looking for a camera that’ll last for years and has tons of options to help you grow as a photographer, buy the Sony alpha NEX-7.”

Without doubt, the 24.3-megapixel NEX-7 is one of the most lusted after cameras in years. It sold for $1,000 over list on eBay when it initially came out, but now has settled down to more realistic levels. That said, forget any thought of a discount. Read on to discover why this is clearly one of the best new digital cameras to hit the planet. Yeah, that’s a bit of hype but this is a good one.

The Sony alpha NEX-7 is one of more attractive digital cameras we’ve handled in quite awhile—especially when outfitted with matching black lenses. For our review, we had the all-black $999 f/1.8 24mm Zeiss prime lens and the kit f/3.5-5.6 18-55mm glass. They looked really sophisticated compared to the silver motif f/1.8 50mm prime ($349) and f/4.5-6.3 55-210mm telephoto ($349) in our backpack. Not that we’d toss those lenses in the recycle bin, but all-black really gives the package a very high-end aura.

At first glance, the NEX-7 looks like others in the NEX family (C3, 5N) but the backs are completely different as the NEX-7 has a viewfinder and two large dials on the top right that are part of the new Tri-Navi onscreen menu system. This GUI is much different than those from competing manufacturers and there’s definitely a bit of a learning curve. It’ll require a review of the manual, but once you get the hang of using the navigation key and the two dials, the alpha offers very sophisticated imaging adjustments.

The NEX-7 looks similar to other members of the family but has a textured faux-leather grip. The front is clean, other than a remote sensor, AF Assist lamp and alpha E-mount. There’s a good selection of glass now–not Canon/Nikon levels–but enough to handle most photographer’s needs. If you’d like, there’s an adapter so you can also attach Sony A-mount lenses. The camera has a mostly metal body, measuring 4.75 x 2.75 x 1.6 (WHD, in inches) and weighs 10.3 ounces (body only).

On the top deck is a hot shoe, built-in pop-up flash and the Control dials R/L. On the grip is the on/off switch, shutter button and Navigation key that links to the Control dials. Look at the back of the camera and things start to get interesting. On the top left is a .5-inch 2.359K-dot OLED Electronic Viewfinder (EVF) with nearby diopter adjustment. This is an extremely high-quality, bright display that’s very readable. A sensor turns it on when you hold the EVF up to your eye. Your other viewing/framing option is a tilting 3-inch LCD screen rated a fine 921K pixels. The range of motion isn’t that great but you can raise the camera over your head or shoot at waist level. Other buttons on the back are the pop-up flash, playback and AF/MF-AEL toggle. Now things get different as instead of the typical four-way controller with center set button for moving through adjustments, there’s Sony’s system which consists of two buttons—above and below the rotary dial with center OK button. Depending on your mode, options vary widely. It’s not Stephen Hawking-brainiac difficult–just a new way of doing things.

Moving on to more prosaic items, you’ll also find a “red dot” video button on the top right which fits neatly in the faux-leather thumb rest. On the left side (facing the screen) is a compartment for mini HDMI, USB outputs and a mic jack. The bottom of the Made In Thailand camera has a metal tripod mount and battery/card compartment. The battery is rated 350 shots per CIPA, a good number. The NEX-7 accepts Memory Stick Pro Duo and SD cards—definitely use high-speed high-capacity media (Mark 2/Class 6+).

We used an early version of the NEX-7 last August and really liked it. The camera was supposed to arrive in the Fall but unfortunately the floods in Thailand ruined those plans. A few did make it to the States and we saw them going for $1,000 over list during the holidays. Part of the reason is the fact this camera has a 24.3-megapixel APS-C CMOS sensor, the same as Sony’s much larger SLT-A77 DSLR. Now if you want to go pixel-crazy, you can always buy the new $2,999 Nikon D800 with its 36.3MP Full Frame imager. Given the NEX-7 is only $1,199, that makes it a relative bargain! Whatever–the Sony has a lot of pixels and we couldn’t wait to use it after our first taste many months earlier.

The NEX is a Compact System Camera so it doesn’t have the traditional DSLR mirror-box assembly and inherent bulk. Rather than viewing your subject directly through the lens, you’re using Live View. We didn’t find this to be an issue but were initially quite thankful for the EVF as the LCD wiped out in direct sunlight in the Auto setting. Reading the manual and adjusting brightness to Sunny Weather took care of this issue.

As noted earlier, the NEX-7 has unique interface that takes time to master but familiarity doesn’t breed contempt. Simply put the more you use it, the easier it gets but Sony could make things simpler. Picture Effects are lots of fun. The NEX-7 has 11 of them. Now Olympus has a direct Art menu setting to change them on its PEN models. With the NEX you go to Brightness/Color, scroll as you look for Picture Effects, and then make your choice. Putting them under Scene or giving them their own setting on the mode dial would be much more consumer friendly. There are more quirks like this. The reason we’re focusing on these issues is simple—the NEX-7 would get a 9.5 rating rather than the 9 (Editor’s Choice) if Sony made a few changes. Blow away the smoke, however, this is a wonderful camera.

We used the camera to capture cityscapes and the first blooms of early spring in the Northeast. Sony provided four lenses plus the body but to be honest the f/1.8 24mm Zeiss and f/1.8 50mm prime lenses got the biggest workout. Although having nothing against zooms in any way shape or form, there’s something comforting about a single focal length (36/75mm 35mm equivalents respectively).

The NEX-7 was primarily set to JPEG Fine (RAW is available) and we started off in Auto then moved the dial through the various options, including shots taken with Picture Effects such as Posterization as well as HDR. Videos were shot at 1080/60p AVCHD. After taking stills and movies, everything was reviewed on a monitor with extreme blowups, a 50-inch HDTV via HDMI and prints made.

We’re pretty hard to impress when it comes to digital cameras; handling hundreds over the course of a dozen years will do that for you. Yet when we did our pixel peeping to 100% enlargements, we kept waiting for the images to fall apart but they didn’t. It’s still not the quality of a Full Frame DSLR but NEX-7 files had a richness and accuracy you’ll really appreciate. We took many shots of bright yellow forsythias, pink weeping cheery blossoms, flowering green/white Lily of the Valley as well as multi-colored beaded baskets. In all cases, the colors were spot on. The camera was set to the Standard color space and we were quite pleased with the results. The camera has more than enough tweaks if you prefer a different style. Beyond the flowers and plants, a church front with mosaic decorations was a beauty even taken on a cloudy day. We even caught a spur-of-the-moment shot of a white Norwegian Forest Cat and her green eyes had deep details that you just love enlarging on the monitor.

The NEX-7 is very responsive and has a 25-point AF system so there was little grabbing for focus. The camera has a high-speed burst mode of 10 frames per second with the exposure fixed so don’t expect Sports Illustrated cover quality. It drops to 2.5 fps with focusing which is OK but quality DSLRs are 6 fps or more. Guess you can’t have everything…

Long-time readers of DigitalTrends.com know well the issues digicams have with digital noise at higher ISO settings. That’s why we recommend models with larger imaging sensors to help control this problem. Since the NEX-7 has a DSLR-sized device, we weren’t quite sure what to expect with 24.3 megapixels. We were very pleasantly surprised at how well this camera handled noise. In our tests, there was barely any noticeable to 1600 but at 3200 artifacts arrived and colors shifted slightly. At 12,800 there was a dramatic shift and 16,000 was slightly worse. However, let’s put this in context—the results were outstanding. We did our test with the Zeiss 24mm lens which has built-in optical image stabilization and even at slow shutter speeds, images were crisp and sharp.

The video quality of this Compact System Camera is also very good with similar fine color results. There’s a bit of shutter roll but nothing like Olympus PENs.

This conclusion is hardly a surprise. If you’re looking for a camera that’ll last for years and has tons of options to help you grow as a photographer, buy the Sony alpha NEX-7. The NEX-7 is a winner and a clear Editor’s Choice. If you must have it now, you’ll pay a premium as Sony ramps up production. According to company execs, a lot of the demand should be satisfied in April/May. We’d wait and save so we could buy the NEX-7 with the Zeiss f/1.8 24mm prime lens. We know that’s a $2,000 package but it’s definitely worth it.