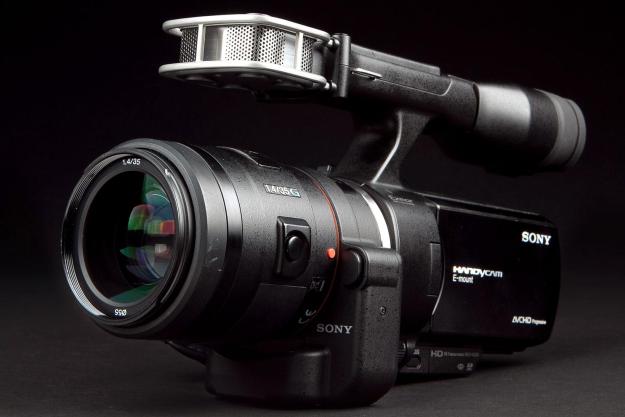 “As a consumer camcorder, the Sony NEX-VG30H is pricey for most, but it gives you the benefits of interchangeable lenses and a large sensor that let you create cinema-quality video.”

Let’s get this out of the way: Sony’s Handycam NEX-VG30H camcorder is pricey and big. At $2,700, you could buy almost 10 budget compact camcorders that shoot high-def. But comparing the VG30 to a regular consumer camcorder is like pitting a BMW 5-series to a Toyota Camry. Both are cars, but naturally one offers more performance and bells-and-whistles than the other.

With that analogy in mind, the VG30 is unique and isn’t like all camcorders. Whereas most consumer camcorders have fixed so-so zoom lenses, the VG30 lets you use higher-quality lenses interchangeably, letting you pick the glass that will deliver the effect you desire. The VG30 also has a large sensor, which allows you to shoot better in low light and capture high-quality video and stills. These are the two big features that allows the VG30 to overcome the limitations that are placed on consumer camcorders. The VG30 gives you pro-like features without requiring you to actually become a pro, as it’s intuitive and easy to use. In our opinion, you don’t need this camcorder – most people won’t need the amped-up performance – but you’re going to want it because it gives you great features and benefits that will propel you from amateur to videographer, or you’re already an advanced user who’s looking for a more affordable pro-like camcorder.

The NEX-VG30H is a high-definition prosumer-level camcorder that comes with an 18-200mm E-mount zoom lens, which goes for $2,700. You can also purchase the camcorder without a lens (the NEX-VG30) for $1,799, and choose the type of lens that best fits your needs. That’s the beauty of this interchangeable lens camera: It adapts to you, but it’s also ideal if you already are a Sony camera user and own a set of lenses, which you can use with this camcorder (see more in in “Lens Flexibility.”)

The 18-200mm zoom is all-purpose enough to satisfy users in most common shooting situations. The zoom is variably controlled in speed and direction by changing the pressure on the large, comfortable rocker style switch. It also has multiple fixed speeds. The zoom is image stabilized (IS), and offers two levels: Standard and Active. As you might guess, Standard is for general use, while Active is for more motion. Just by looking at the picture, you can tell the VG30H is heavier and larger than your typical consumer camcorder, weighing in at more than 3 pounds (different lenses will yield different weights, of course).

Aside from having a touch-sensitive 3-inch widescreen LCD, there is also the TruFinder display, Sony’s unique 2.4-megapixel OLED (Organic Light Emitting Diode) electronic viewfinder. This amazing viewfinder provides a colorful, high-resolution display of the video being captured, as well as settings and their effects.

The VG30 isn’t for everybody, but there’s nothing else like it in the consumer space, or in this price range either.

You’ll find enhanced audio recording with the use of a Quad Capsule Spatial Array microphone system. This four-microphone array sits atop the VG30’s carrying handle, and uses four precision mic capsules that are spaced at 45-degree angles for the best Dolby 5.1 stereo-surround effect. A furry windsock covering the array reduces wind noise. For those pro-level users, an external stereo microphone port is available, and professional XLR-type microphones can also be used with an optional XLR adapter. The audio can be manually controlled as well.

The VG30 has two operational modes – video and photo. AVCHD-format video is recorded onto either a Memory Stick Pro Duo or a SDHC/SDXC memory card, in one of four quality settings: FX, FH, Standard, and LP. Frame rates can be set at 60i (standard), 60p, or 24p (cinema-like). Still images are recorded in either 16-megapixel JPEG, RAW, or both. Provided Sony image software reads the RAW format and can enhance and convert the RAW “digital negatives” into more conventional TIFF or JPEG images.

In terms of image quality, one thing that sets this camcorder apart is the large-format sensor, which is almost 20x bigger than the ones found in typical camcorders. This larger APS-C sensor, which you’ll also find in higher-end cameras, allows cinematic storytelling techniques, primarily through the depth-of-field effects – the area of focus that lies in front of and behind the main point of focus. Like in photography, the wider the aperture of the shooting lens, the narrower is the depth of field, directing your attention only to that area that is in focus. Cinematic-style videographers use this effect to direct your attention to key areas, while blurring out the background. The VG30’s large sensor also has more individual photo diodes, which provide greater light gathering power. This greater light sensitivity lets one shoot with natural lighting, something that contributes the storytelling effect.

The zoom lens on a typical consumer camcorder cannot be interchanged. Therefore, the videographer using such a camcorder is limited to the capabilities of the attached lens – focal length zoom range, f-stop (aperture) range, etc. With the interchangeable E-mount lenses used by the Sony VG30, it gives the user the flexibility of using either Sony E-mount lenses specifically designed for the camcorder, or Sony Alpha lenses, designed for Sony Alpha DSLRs via an adapter.

Alpha lenses offer even greater creative options because there are dozens of lenses with an even wider variety of focal lengths than the E-series. Each Alpha lens offers fast, wide aperture settings as well. The Sony LA-EA2 E-to-Alpha-mount adapter is required, however.

Our first tests began with the included 18-200mm zoom. We then later tested the camcorder with supplementary E-mount and Alpha lenses Sony provided for our review.

With the VG30 you get more shooting flexibility with interchangeable lenses, and the capability to capture video that tells a story through its cinematic quality.

While we could single-handedly hold the camcorder, our right hand quickly got tired due to the VG30’s weight, especially if you have a heavy lens attached like the included 18-200mm. It’s best to adopt a two-handed technique, with the left hand cradling the lens from below and the right hand slipped through the handgrip. The rocker-type zoom control, accessible by the handgrip, was the best we have ever used and reminded us of professional zoom lenses with precision variable or fixed speeds.

We loved the OLED viewfinder’s display because everything was clearly visible, even if the LCD monitor was completely washed out by bright sunlight. Viewfinders are rare in consumer camcorders today, and the Sony OLED TruFinder is a true statement piece.

Before shooting, we set up the image quality for both video and still images. For video we chose FH (high quality) as the best tradeoff between image quality and memory used. The frame rate was set to 60i (standard), and SteadyShot IS was set to Active. The manual button was preset to IRIS (Aperture) because we wanted to try out the depth-of-field effect.

For photos, we chose JPEG+RAW to capture not only 16-megapixel JPEG images, but also RAW versions for further processing with the provided Sony software. Note: Still images can’t be captured while shooting video, and photographing in JPEG and RAW will take up quite a bit of storage space. We normally wouldn’t recommend using a camcorder for images, but not so with the VG30. The benefit of using a large sensor with different lenses makes it comparable to using a video-capable DSLR.

To create that cinematic storytelling effect we talked about, we first used a Sony Carl Zeiss Planar 85mm f/1.4 Alpha-mount lens that’s specialized for portraits and stills. It’s a whopping $1,700 glass, but it gives you two f-stops wider in aperture than the less expensive 85mm f/2.8 lens. With this lens, the camcorder delivered spectacular results. The shots of our model were crystal clear, with the smoothly blurred-out background that you’d expect from a professional cinema lens. A consumer camcorder with a standard fixed zoom lens could not have done this. We also shot the same scenario with a wide-angle 35mm f/1.8 lens, and again enjoyed the same defocusing of the background.

Because there is so much physical glass, one thing about the 85mm f/1.4 lens we found annoying was that it caused the focusing motor to make a lot of noise. As the lens strained to focus properly, this noise was easily captured by the built-in microphones. We recommend using an external microphone to avoid this issue when using certain large Alpha lenses. But the standard 18-200mm zoom is essentially silent with no motor noise recorded.

Since the camcorder uses a large sensor, we expected strong low-light performance, and we got some amazing results. With the camcorder gain set to auto, the sensitivity was increased up to the maximum 30db level. Thanks to the large sensor, features and details in shadows could clearly be seen, and surprisingly without the excessive noise in the dark areas.

We also got creative and tested the effects of variable shutter speed, something many camcorders don’t allow you to do. With the manual button set to shutter speed, we altered the it all the way from a super fast 1/10,000th of a second to as slow as half-second. When the shutter speed slows to below 1/30th of a second, the captured video begins to blur, and gives a distinctive dream-like effect. It’s especially effective when capturing lighting or people in motion. We shot some great “time altering” scenes with slow shutter speeds at the bumper car venue and at other spinning rides.

The VG30 has many “fun” features that will make you want to explore your video creativity even further, with some interesting built-in visual effects for video and stills. These are found in the Camera Settings/Picture Effects menu: Toy Camera, Pop Color, Posterization, Retro Photo, Soft Hi-Key, Partial Color, High Contrast B/W, Soft Focus, and Miniature. To us, Partial Color was one of the more unique; you can select from among four colors – red, green, blue, and yellow – and only keep objects in the scene with those colors, while making everything else black and white. This Partial Color effect can really draw attention to an object of a certain color. Another unique feature is CinemaTone, which allows you to shoot with a wider range of color gamma, similar to film. This is especially useful for videos shot at the 24p cinema-like setting that many videographers prefer.

When we played back the footage on a 52-inch widescreen HDTV, it was like we were watching a commercial-grade movie shot with pro lenses. The audio quality capture with the camcorder’s quad microphones was outstanding, crystal clear, and without distortion – with the exception of the motor noise from the Alpha lens we mentioned.

Yes, the NEX-VG30H costs more than three-times the price of a typical high-end HD camcorder, but the VG30 isn’t interested in playing on that level. It’s designed to give you professional-quality video (and stills) without going professional. If you already have a Sony NEX digital still camera with some lenses lying around, then you’re already ahead of the game.

The VG30 isn’t for everybody, but there’s nothing else like it in the consumer space, or in this price range either. While expensive, other pro video camcorders can cost even more, especially if you are looking at models that let you changes lenses. If want to up the ante on your filmmaking, however, the flexibility and quality of this camcorder are strong selling points. Even if you’re just shooting your kids’ games or a birthday party, it might be video that someone actually wants to watch.