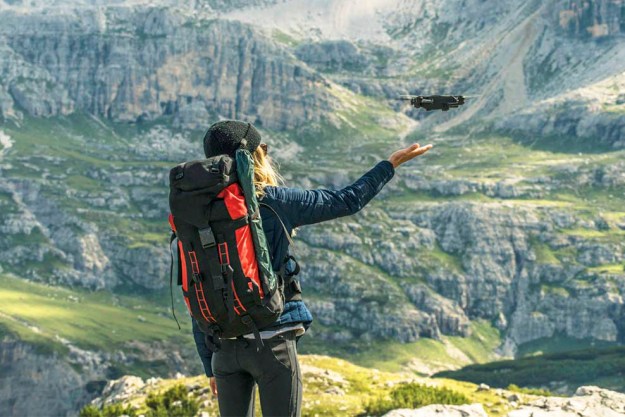 Back in August of 2018, Yuneec officially hopped on the portable UAV bandwagon and released a folding camera drone. The Mantis Q, as it’s called, is effectively the company’s answer to DJI’s wildly popular Mavic line, and as such, it’s equipped with a flurry of fun features that the company hopes will coax you away from DJI — things like folding arms, 4K camera, voice/gesture recognition, and a price under $500. But can it really stand up to DJI’s fleet?

Now that Yuneec has had a few months to work out all the kinks, we took a Mantis Q out for an extended test to see how it stacks up against the competition.

In terms of its size, the Mantis Q is not that much bigger than DJI’s minuscule Spark drone, and it’s still small enough to take off from your hand. It’s also wider (especially with the propeller arms extended) and thicker, which gives it some pretty distinct advantages. That extra space is used for a significantly larger battery, which allegedly provides a whopping 33 minutes of flight time (more on that later), and larger propellers that get the Mantis up to a top speed of 44mph, which is pretty fast for what’s arguably an entry-level drone.

On top of that, the Mantis Q sports a 1/3.06 inch CMOS camera sensor capable of 4K video at 30fps, which sounds good on paper, but in practice was a little underwhelming. Due to the fact that this drone relies on digital image stabilization instead of mechanical, you lose image stabilization functionality when you shoot in 4K. In other words, you’ll need to step down to either 720p or 1080p at 60fps, or 1080p at 30fps to get more stable video.

On the bright side though, it does come with some nifty camera modes that partially make up for lack of mechanical stabilization. Scenery mode, for example, automatically alters the color balance of the photos you take to ensure that the colors really pop — which is really nice if you don’t want to spend a bunch of time post-processing all your photos.

As far as we can tell, the Mantis Q is pretty damn sturdy.

The Mantis Q also boasts a range of intelligent flight modes, including journey (flies away and to an object in linear fashion), point of interest (a circular flight path around a selected object), and return to home — though it’s worth noting that these modes aren’t numerous as they are in some competing drones. The Mantis Q also supports limited voice control to take photos, videos, and flying functionality, but it feels gimmicky and unnecessary. Are you really going to shout at your drone to make it do stuff? Probably not.

This brings us to another problem: the drone’s glaring lack of obstacle avoidance. While it does have downward facing sensors to ensure solid landings, you’d be wise to fly this bird in an area free of obstructions. It can’t sense its surroundings, so it’s up to you to avoid them manually.

Overall, this drone is a fairly good value at its price point, and a slight improvement over the Breeze. But with DJI’s Spark now below $400, the Mantis Q feels somewhat behind the times after only being out for a matter of months.

Yuneec ditched the plastic hull of the Breeze for a sturdier metal enclosure with the Mantis Q, which adds a little bit over three ounces to the Mantis Qs weight (16.9 oz) — an acceptable tradeoff for the added durability. You won’t have to worry about damaging this thing easily in the event of the inevitable nasty crash.

Despite its responsive controls, the Q isn’t quite as stable as we’d like it to be.

We didn’t purposely crash our Mantis Q during our test, but we also didn’t notice any significant damage after subjecting it to a few hard drops. As far as we can tell, it’s pretty damn sturdy — and since it’s not equipped with any sort of obstacle avoidance, that’s definitely a good thing.

The controller is pretty standard, with a flip-up extendable holder that was just barely large enough to fit our iPhone XS Max with a thin protective case. It was definitely secure though, so we can’t really complain about the build quality. The controller does feel pretty good in your hands, although we’d argue the phone holder could benefit from being tilted back a little bit more to make the screen more readable in the way most people would hold a controller while flying.

While Yuneec says that the Mantis Q can stay in the air for over a half hour, our tests put it somewhere in the order of 20-25 minutes or so — and that wasn’t even with us pushing the drone to its limits. This is only marginally better than the Spark and most other drones at this price point, and we’d imagine it would do no better than most in “Sport mode” given its performance in typical flight.

The controller charges in about two hours using the included USB-C cord, and we were able to charge the battery in the included battery charger in about 50 minutes from full discharge. That’s not overly impressive, but not too bad either. It is nice that the battery can charge up to four batteries simultaneously – and extra Mantis Q batteries are priced at a reasonable $60 each, although it’s worth it to purchase them as part of the $650 X-Pack option when you purchase the drone initially.

Piloting of the drone feels no different than any other drone in its class, and the Mantis Q is highly responsive to controller commands. While you can pilot the drone using the phone-based virtual controller, the app controls are (as usual) a bit mushy and imprecise. As such, we recommend sticking with the physical controller whenever possible.

Unfortunately, despite its responsive controls, the Mantis Q isn’t quite as stable as we’d like it to be. We’ve flown our DJI Spark in fairly windy conditions and seen it hold position like it’s bolted to the sky — but that’s not the case with the Mantis Q. Even in very light winds, the drone seems to drift way more than it should, which means you’ll need to stay on top of the controls quite a bit.

The drone’s autonomous flight modes work acceptably, but are hampered in their level of usability by the Mantis Q’s shaky video. Again, we really wish this thing had a mechanical gimbal.

Also, Yuneec’s voice control system seems like a response to the gesture-recognition systems that DJI builds into its drones, but it’s a really gimmicky feature. Honestly, we’d rather Yuneec spent all that time and effort to improve the camera and software to help the drone stay in one spot better.

While it could have been a selling point, the camera is where the Mantis Q struggles. It’s not only the stabilization issue that is the problem here, which we’ll illustrate. We’ve included some sample footage, and attempted to take both our Spark and the Mantis Q on similar flight paths. You’ll see a noticeable difference.

At 4K, the Mantis Q only matches the Spark’s 1080p footage in terms of clarity, although with some distortion of the horizon line when is not centered in the picture (barrel distortion). You’re also dealing with way too much shakiness to really be able to use the footage. Stepping the Mantis down to 1080p 60fps or 30fps, the digital stabilization kicks in, but the image loses sharpness — although the 60fps frame rate makes fast motion smoother (DJI’s Spark supports a max of 1080p 30fps).

The lack of stabilization in 4K mode makes motion footage honestly a bit painful to watch. Also, your first second or two of video while the drone is in motion is unusable too, since the drone tilts to start flight in your desired direction, causing the camera to point either downward or upward briefly.

The Mantis Q puts up a good fight, but it’s not enough to dethrone DJI.

We’ll give the Mantis Q one thing, though, and that’s high quality photos. Our pictures looked sharper with the Mantis versus the Spark, but we’re guessing most folks are looking for great aerial video instead of still photographs, so this likely doesn’t mean much.

Additional accessories in the box are a bit slim. There is no included carrying case, but Yuneec does include an additional set of propellers in case you break the ones already included with the drone. If you want additional batteries and a case, you’ll need to step up to the X-Pack, which is an additional $150. It includes a case, three additional batteries, and another set of spare propellers. It’s an added expense, but costs less than it would if you bought all these items separately.

The Mantis Q puts up a good fight, but it’s not enough to dethrone DJI. Despite boasting an admirable set of specs and features, the drone pales in comparison to a lot of similarly-equipped competitors. Ultimately, the lack of mechanical image stabilization is what spoils it. The flight controls are great, the drone itself is durable, and it has most of the flight modes you need — but since the 4K footage isn’t stabilized, this isn’t a drone that we’d recommend.

With the Mantis Q’s camera issues, we certainly think so. The DJI Spark – while only supporting 1080p video, average photo capabilities, and a disappointingly short flight time – generally scores better than the Mantis Q in just about every metric. It’s disappointing. Yuneec’s newest drone feels like only a small step above the Breeze rather than the evolutionary jump that would make it a competitor to DJI’s original Mavic Pro, Mavic Air, or Mavic 2.

Parrot’s Anafi drone is also one worth considering. For $500, it offers most of the same features, better position hold, and a drastically better camera setup. It also has a 3-axis gimbal with 180 degrees of tilt freedom, so it’s more stable and more creatively liberating than what you’ll get with the Mantis.

We have absolutely no fears that this drone won’t stand the test of time, and perhaps better than Yuneec’s Breeze in harder crashes. But there’s no hardware upgradability here, so what you see is what you get. We fear that the Mantis Q might already be technologically obsolete considering the competition. That’s troubling.

No. If you’re in the market for a low-cost 4K drone, there are better options than the Mantis Q. The shaky video will frustrate you, and the Parrot Anafi runs circles around it in terms of picture quality. Hell, even if the Anafi isn’t your speed, we recommend saving some cash and stepping up to the DJI Mavic Air. There are better options out there.