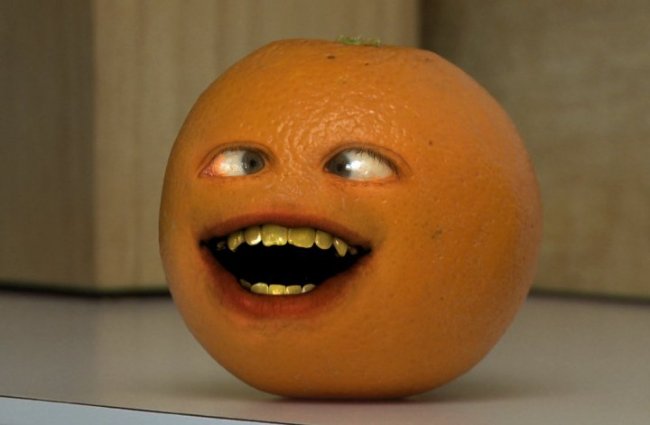 Annoying Orange, the iconic YouTube phenomenon created by Dane Boedigheimer, will soon be coming to a living room near you. Yes, television.

The Collective, a management, media and production company, has agreed to finance six 30-minute episodes. Tom Sheppard, the man behind Pinky and the Brain will be writing and Shrek 2‘s Conrad Vernon will be the executive producer.

As of 2011, Annoying Orange is the eighth most subscribed YouTube channel with more than 1.7 million subscribed and the web series has had more than 565 million total views on its channel. The large pre-existing fan base may be a good indicator of success.

Orange isn’t the first web series to transition to TV. Lucas Cruikshank’s Fred, a YouTube series about a six year old with anger management issues, aired as a movie on September 10 on Nickelodean. It drew 7.6 million viewers and there is a sequel planned.

In an interview with Boedigheimer on Mashable he mentioned that the animation will retain the feel of the webseries and all the core characters such as Pear, Passion Fruit, Midget Apple, Grandpa Lemon and Marshmellow will be there. The setting will move away from the restriction of the kitchen and will now be on a time and space traveling fruit cart. We can look forward to being introduced to new fruit characters as well.

Does the web show have enough story potential for half hour episodes? Boedigheimer said he was excited about the challenge of the transition and believed that Annoying Orange‘s success may translate into a larger trend of web shows making it to the big television screen. No word yet on which network it will be on. We think it would do quite well on Cartoon Network’s [adult swim].

Topics
YouTube reveals why it’s been removing far more videos than usual
Dr Disrespect seems set to resurface on YouTube
YouTube is trying to crack down on QAnon videos. It’s not working
TikTok isn’t paying its biggest stars, but they don’t really care
Elon Musk reveals date for Twitter Blue relaunch
What is Twitter Blue and is it worth it?
Twitter closes offices as ‘work pledge’ deadline passes
What is Ambient Mode on YouTube?
What is BeReal?
How to delete a BeReal post
How to use TikTok’s voice changer
Twitter attempts to sort out verification system with new badges
Hive Social is my favorite Twitter alternative, but that’s not saying much