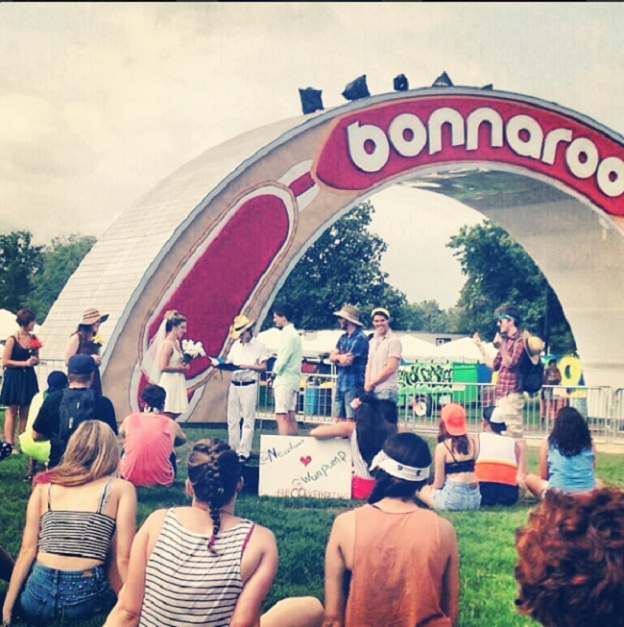 If you want to see footage of Woodstock, you don’t have very many options – your best bet is the documentary Woodstock. And it’s a good movie. But for an event with such massive cultural significance, there are many Woodstock veterans without proof they were there. They can only tell hazy, meandering tales of hippie depravity to their grandchildren. And the people who do have proof tend to have grainy, out-of-focus, and potentially crusted with decades-old mud proof.

That won’t be the case for this generation of festival-goers. You can send Snapchats of Paul McCartney and tweet at Tom Petty as he plays. People would already be bringing their smartphones and using social media at music festivals without any prompting, but now many festivals are partnering with social networks to make it even easier to engage online while you’re in music overdrive.

And this year’s Bonnaroo is taking the union of music festivals and social networks to a whole new level. Billboard reports that Bonnaroo teamed up with Facebook and Instagram on special projects to make fans hyper-connected throughout the festival. Bonnaroo gives festival-goers wristbands with RFID chips embedded in them, and they can sync this wristband up to their Facebook account so that people automatically check-in each time they arrive at a stage.

In addition to the automatic check-ins, Facebook is also participating in Bonnaroo’s attempt to crowdsource a documentary called True Roo. Users can take advantage of Facebook’s newly-arrived hashtags to tag their posts, and Instagram users are also a valuable source of True Roo photos. The festival produced over 2,300 #trueroo photos this weekend, so it’s unlikely Bonnaroo will have a problem drumming up material – although, as you can see in the pictures, apparently someone’s vision of True Roo is Spam … that’s what you get when you invite crowd participation: the lowest denominator.

There aren’t as many photos with hashtags on Facebook about Bonnaroo yet, probably because it’s such a new feature, but if you search for #Bonnaroo, you can see that some people are starting to catch on.

Instagram also worked with Bonnaroo to give special access to photographer Danny Clinch, or @dannybones64, who is going behind-the-scenes to get the most exclusive photos of the artists, and who will then post these pictures on Instagram.

This isn’t even close to the first time that music festivals have worked with social media companies, but this level of partnership illustrates how digitally documenting these weekends has become an integral part of experiencing them. Almost every major festival has its own app, in addition to these alliances with social networks. And while SXSW has been using RFID technology in its bracelets since 2004, it’s usually one of the more cutting-edge festivals in terms of social technology (which makes sense, since it’s a technology festival as well) – but other more traditional festivals like Bonnaroo, Lollapalooza, Osheaga, Coachella, and more are now impressively outfitting their ticket holders with many ways to share media. And the automatic check-in integration with Facebook is new to Bonnaroo 2013.

And it will be great future archivists – it’s really easy to amass a robust collection of photos when the place you’re in encourages you at every turn to take a picture or post your thoughts, and that’s exactly what Bonnaroo is doing.

This hyper-connectivity certainly makes social media enthusiasts who also like to wear shredded Navajo-inspired t-shirts and wave their hands around while they pretend to know a Wilco song happy, but it doesn’t jive with every band. Lots of musicians really don’t like it when you film them with a smartphone as they perform, including the Yeah Yeah Yeahs, who played on Thursday. The Yeah Yeah Yeahs have made a point to ask fans not to take videos during their concerts, since it’s distracting. But there’s no way they could avoid their fans holding up their wide Galaxy S3s with the festival itself encouraging this sort of behavior at every turn. It’s a frustration for artists who want to participate in festivals but not in modern social tech.

Then again, tight social media integration has already proven very valuable to both festivals and everyone involved, since it makes it easy to communicate in case of emergency. In 2012, Lollapalooza had to be evacuated due to a thunder storm, and the organizers used Twitter and Facebook to alert concertgoers.

Plus, even if Bonnaroo and other music festivals disavowed social media, they’d be fighting an uphill battle, because the people attending these events want all of their friends to know where they are, who they’re listening to, and how dope their dip-dyed vintage denim booty shorts look paired with rubber boots and a borderline pornographic crop-top. It’s the new disposable camera, you might as well accept it.

Fan sites like Smilecoachella showcase how eager festivalgoers are to digitally document their forays into temporary bohemianism. And other media outlets capitalize on this fixation of documentation; everywhere from Teen Vogue to NBC ran pieces plucking random Lollapalooza fashion kids from the crowd and showing them off. For a certain demographic of the crowd, it’s not expected that someone will take your picture and put it on the Internet – be it you, your friends, or an actual news source – so it’s becoming just another aspect of the festival, like getting obscenely bad B.O. or realizing O.A.R. suck. So it would be a major missed opportunity for festivals to ignore how easy it is to connect with their customers via social media and crowdsourced documentation.

If crowdsourced photos aren’t enough and you couldn’t make it to Manchester, Tennessee this year, YouTube is doing the same thing it did with Coachella and livestreaming the festival on the Bonnaroo365 page. Maybe you can take a screenshot and hashtag it #trueroo to get really meta.

How to use Twitter Analytics
Snapchat’s new Dual Camera uses both front and rear cameras simultaneously
How to deactivate your Instagram account
Instagram further restricts content for new accounts under 16
Twitter profiles for businesses just got way more useful
How to post on Reddit: everything you need to know
This Twitter vulnerability may have revealed owners of burner accounts
A new Snapchat feature lets parents see who their teens chat with
Yes, Twitter is down right now, and we don’t know when it’ll be back
WhatsApp adds new privacy features that everyone should start using
Snapchat is down right now. Here’s what we know
The more Instagram copies TikTok, the more I hate using it
Elon Musk hints that he could start his own social media platform