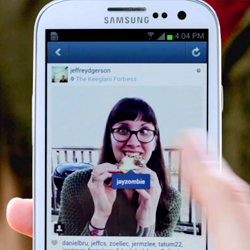 Interesting: Instagram now tells you when someone takes a screenshot of your pictures.

This seemed believable, because Wortham is a good, well-respected journalist, and the whole “screenshot alert” thing is a real feature on Snapchat. In case you are over the age of 18, you might not know much about Snapchat, so here’s a brief description of the feature: You send image messages that self-destruct, but some of us have mean friends who take screenshots of those pictures before they disappear. While Snapchat can’t do anything about the picture, it does alert the sender that their photo has been captured by the recipient … so that you can harass them until it’s deleted if you so choose.

While Instagrams don’t disappear, you can’t save them from your feed (not even from the Web viewer, although you can from Facebook, but that means they had to have been pushed there). So if you’re desperate to grab someone’s photo straight from your phone, you can take a screenshot. After hearing the rumor that a notification system was coming, I decided to test it out, and took a few screenshots of my friends’ pictures and then pestered them about whether they got alerts. They did not. Then I pestered my fearless editor, Molly McHugh. She did not get an alert either. Meanwhile, I saw more people tweeting about the new feature.

I emailed Instagram for confirmation about the new feature right after I saw Wortham’s tweet, and they wrote back a pretty blunt response, settling the whole thing:

“Instagram does not have, nor are they testing a feature that alerts users when a screenshot is take of their photos. We’re seeing the posts on twitter as well and following up to find out why people got that impression.”

As it turns out, Wortham’s sister had told her that she saw a screenshot alert, but she was really just confused about Instagram’s new “Photos of  You” feature.

And so an Instagram-backlash crisis was averted. Back to work, everyone.

What is Twitter Blue and is it worth it?
Elon Musk reveals date for Twitter Blue relaunch
What is Mastodon? Here’s why everyone’s talking about this Twitter alternative
Twitter’s SMS two-factor authentication is having issues. Here’s how to switch methods
Elon Musk officially owns Twitter now: a timeline of how we got here
How to use Twitter Advanced Search
Twitter to start charging for verification mark, reports say
Having trouble accessing your Instagram account? You’re not alone
Elon Musk considers bringing Vine back from the dead
Staying on Twitter? Here are two ways to make it easier
Elon Musk now Twitter CEO after firing entire board
Twitter Blue is losing Ad Free Articles and Musk’s latest tweets indicate further changes
Clear Mode on TikTok: Here’s what it is and how to use it