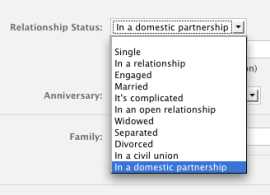 The Huffington Post first reported the addition to Facebook’s Relationship Status bar. The social network now officially allows users to list themselves as “in a civil union” and “in a domestic partnership” with their respective partners. According to Facebook, “this has been a highly requested feature from users. We want to provide options for people to genuinely and authentically reflect their relationships on Facebook.”

Considering the astonishing number of Facebook accounts worldwide, it’s frankly a little astonishing it took this long for the network to acknowledge these types of commitments. But the door has been open for millions of what are largely considered alternative relationships to now announce themselves on Facebook.

“Today, Facebook sent a clear message in support of gay and lesbian and couples to users across the globe,” said Jarrett Barrios, president of GLAAD stated today. “As public support for marriage equality continues to grow, we will continue to work for the day when all couples have the opportunity to marry and have their relationship recognized by their community, both online and off.” According to Barrios, GLAAD was involved in the efforts to add the status option.

So whether or not Facebook intended to make a grand gesture with the relationship status additions, it’s definitely being perceived that way. The feature will be added to US accounts initially, and roll out to Canada, France, the UK, and Australia soon after. Complications are sure to arise in countries where civil unions and domestic partnerships aren’t legally recognized. Facebook obviously plays a very large role in culture, and it can be assumed that this profile alternation will have a couple of consequences. One: There’s sure to be some fallout from outraged traditionalists who don’t approve of these relationships anywhere, including on Facebook. But maybe it will also spur communication and acceptance, something Facebook has been drawing attention to with its anti-bullying efforts.

Topics
Facebook’s new controls offer more customization of your Feed
More status options coming to Twitter, including ‘don’t @ me’
When is the best time to post on Facebook?
Twitter is building a menu option for Twitter Shops
Twitter to start charging for verification mark, reports say
Having trouble accessing your Instagram account? You’re not alone
Elon Musk considers bringing Vine back from the dead
Staying on Twitter? Here are two ways to make it easier
Elon Musk now Twitter CEO after firing entire board
Twitter Blue is losing Ad Free Articles and Musk’s latest tweets indicate further changes
Clear Mode on TikTok: Here’s what it is and how to use it
Twitter’s edit button could soon be free for all users
Instagram to soon let creators make NFTs and sell them to fans