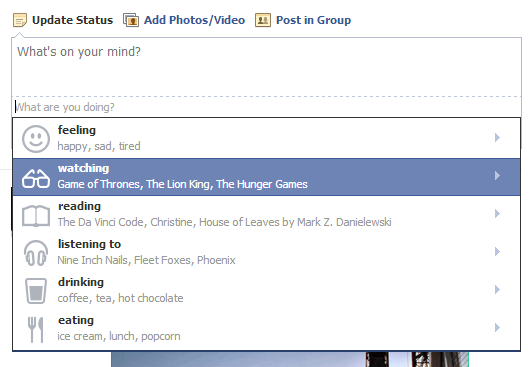 Emoticons and stickers have become popular part of the messaging and social media ecosystems, even showing up within Facebook’s Messenger. Now, Facebook is finally getting around to adding emoticon-based status updates to the rest of its app.

It’s been a slow process to get to this point. While Facebook didn’t offer the ability to plug in emoticons back in October 2012, the social network did start recognizing various emoticons that you could throw into a comment. This was just the start. In November of the same year, emoticons were available on its iOS app.

Then in January, Facebook was testing out emotion-based emoticons and sharing options that presumably were meant to encourage users to publish regular updates. We haven’t heard much about the update since then, as it was just an announcement by Facebook at the time. TechCrunch got an early look at the new feature in action, and now it’s started showing up for other users (including some of us). From the looks of it, there aren’t really any changes in terms of the design from what we’ve seen before.

Where you publish your status update from your News Feed, you’ll see a smiley face icon next to the icon for attaching photos. We’re beginning to see these mood-based emoticon status updates can be published on both Web and mobile.

If you look at the screen shot at the top of this page, notice how specific these moods can get. You can choose from a menu of activities and moods to describe how you’re feeling. So you can take your pick from activities and moods like “feeling,” “watching,” “listening to,” “drinking,” and others. And when you select a “detail” as Facebook calls it, you can specify the activity by tagging it with movie titles if you’ve decided to share what you’re “Watching” or book titles if you’re sharing an update about what you’re “reading.”

These features will tie in quite nicely to help promote the Facebook Pages attached to certain movies, bands, and books. And as we’ve mentioned a few times already, Facebook will be able to use these user-specified interests to figure out what’s actually important to you.

Instagram to start testing a repost feature
How to use Twitter Circle to limit who sees your tweets
Edited tweets may be coming to your Twitter timeline soon
How to use Twitter Analytics
A new Snapchat feature lets parents see who their teens chat with
Yes, Twitter is down right now, and we don’t know when it’ll be back
WhatsApp adds new privacy features that everyone should start using
Snapchat is down right now. Here’s what we know
The more Instagram copies TikTok, the more I hate using it
Elon Musk hints that he could start his own social media platform
Facebook Messenger finally starts testing end-to-end encryption for all chats
What does a check mark mean on Facebook Messenger?
Twitter’s latest features are all about curbing election misinformation