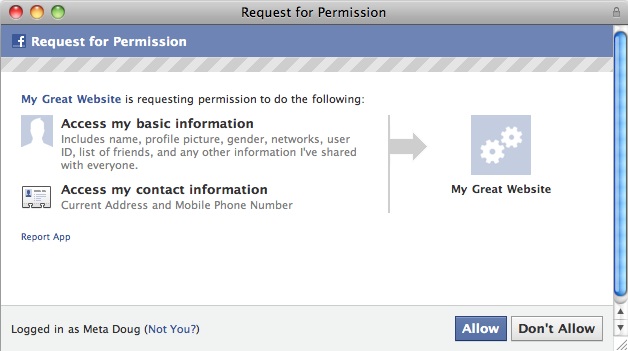 In a letter to Representative Edward Markey, Facebook revealed it plans to pursue applications that require some pretty sensitive permissions. “We are assessing potential additions to the permissions screen that would appear when an application requests a user’s contact information, to determine whether those additions would provide even clearer notice to users regarding the information the application is requesting,” VP of global public policy with the social network Marne Levine wrote.

This permission screen rolled out in January 2011, and was fairly quickly terminated when users realized exactly what information they were offering up. Users weren’t the only ones up in arms: Congress took notice and directly questioned why Facebook was handing out such sensitive information to developers. In the letter, Levine says Facebook decided to “temporarily” shut down the feature. “On review of the user feedback we received in the wake of the product launch we determined that we might be able to inrease visability of these categories of data in the permissions screen, and we decided to suspend the feature pending that review. Facebook is omitted to providing clear notices to users because we know how important it is for users to trust that they have control over their information.”

From the sound of it, Facebook is contrite about the permission screen and the user feedback it attempted to pull without much warning. But how is it going to fix this? That’s not quite clear yet. Levine says it’s undecided “when or in what matter” the permission screen including phone numbers and address will be reintroduced, and only says Facebook is looking into making it more clear what information is being requested. She also mentions that increasing “user education” might be beneficial. Maybe that’s what the dumbed down privacy policy is all about.

While Facebook may potentially limit the amount of information minors are able to release, it wants to avoid modifying the screen itself. Suggestions of adding additional permission screens have been met with resistance, and Facebook points out it that users are statistically less likely to employ an application in such circumstances.

Markey and fellow representative Joe Barton discussed Facebook’s response today at the House Bi-Partisan Privacy Caucus. Generally, both were impressed Facebook was taking the measures to review the permissions screen, while also pointing out the social network will not fly under the radar when it comes to privacy. The key issue remains that Facebook is accessible to anyone over the age of 13, and lawmakers largely oppose sensitive information like phone numbers and addresses being so easily circulated. Markey says Facebook would be wise to “wall off access to teen’s contact information if they enable this new feature.”