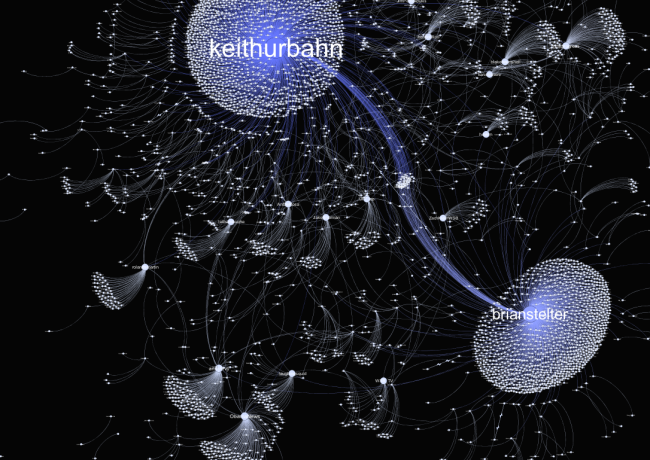 Twitter has long been considered the go-to source for breaking news. But that reputation became firmly implanted in the mainstream psyche with the death of Osama bin Laden last Sunday. Not only were people passing around links to news articles and live video feeds, but primary sources — those with first-hand knowledge of the news — told the world of their revelations in tweet form.

To get a more in-depth look at how the Bin Laden news broke on Twitter, New York-based company SocialFlow conducted an extensive analysis of nearly 15 million tweets related to Osama bin Laden. With that information, they created this galactic flow chart (above) that shows how Keith Urbahn, former Defense Secretary Donald Rumsfeld’s chief of staff — but a relatively a smaller player in the Twitterverse — came to be this week’s most influential news-maker.

“A full hour before the formal announcement of Bin-Laden’s death,” writes Social Flow in a blog post, “Keith Urbahn posted his speculation on the emergency presidential address. Little did he know that this Tweet would trigger an avalanche of reactions, Retweets and conversations that would beat mainstream media as well as the White House announcement.”

As Social Flow notes, Urbahn was not the first person to speculate that the impending news from the White House was the death of Bin Laden. A number of other tweeters, including Libertarian political commentator @commentkazi, @kerrioki and @speechboy71, a Senior Fellow at the American Security Project, who goes by Michael Cohen offline, speculated on Twitter that Osama bin Laden had been killed. But it was Urbahn’s 10:24pm EST tweet, “So I”m told by a reputable person they have killed Osama Bin Laden. Hot damn,” that took flight, and made the news official.

“The rate at which Keith’s message spread was staggering,” writes SocialFlow. “Within a minute, more than 80 people had already reposted the message, including the NYTimes reporter Brian Stelter. Within two minutes, over 300 reactions to the original post were spreading through the network. These numbers represent the people who either retweeted Keith’s original message, or posted a reaction to it. The actual number of impressions (people who saw Keith’s message in their stream but didn’t repost it) is substantially higher.”

In addition to Stelter, who has a 50,000-strong following on Twitter, other influential Twitter accounts added momentum to Urbahn’s scoop. Those accounts included @ObamaNews, Fox News personality @andylevy and popular website @LaughingSquid.
As SocialFlow concludes, the wildfire spread of Urbahn’s tweet was due to the “influence” of those who tweeted the news, the “trust” people had in the validity of the sources, and the sheer amount of people who were on Twitter, trying to discover what all the fuss was about.

“Keith Urbahn wasn’t the first to speculate Bin Laden’s death, but he was the one who gained the most trust from the network,” concludes SocialFlow. “And with that, the perfect situation unfolded, where timing, the right social-professional networked audience, along with a critically relevant piece of information led to an explosion of public affirmation of his trustworthiness.”

Elon Musk holds off on Twitter deal pending fake account data review
Mass Twitter deactivations accompanied by jump in new accounts
Elon Musk just bought Twitter for $44 billion
Elon Musk takes another big step toward buying Twitter
Elon Musk hints that he could start his own social media platform
Facebook Messenger finally starts testing end-to-end encryption for all chats
What does a check mark mean on Facebook Messenger?
Twitter’s latest features are all about curbing election misinformation
Snapchat Plus subscribers are getting these four new features today
You can (sort of) generate art like Dall-E with TikTok’s latest filter
You can now use the Add Yours sticker on Reels for Facebook and Instagram
TikTok bans influencers from creating paid political ads
The 10 most popular TikTok accounts