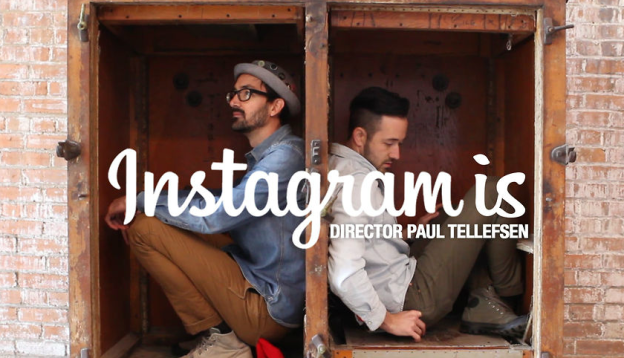 You’d be hard-pressed to find a digital community more loyal, committed, and intertwined than Instagram’s. The app has inspired people to hold “InstaMeetups,” getting together to take shots, and there are weekly challenges everyone is invited to virtually connect with and participate in. When Instagram user (and lover) Paul Tellefsen (@technopaul) decided to make the short documentary Instagram is, he initially was only going to create a fake movie trailer for a school project. “The moment I stepped back after making the ‘trailer,’ I just had this feeling quite unexplainable to most, that I was going to make an actual documentary,” Tellefsen tells us. “With Instagram, there is always someone new to meet and there [are] always more stories to tell. There were deeper topics that needed to be discussed beyond the surface.”

To better capture what he describes as, “so much bigger than an app or a grade on a project,” Tellefsen went on and filmed Allison Anderson (@allistrange), Kyle Steed (@kylesteed), and Brenton Little(@brenton_clarke) as they talked about their love of Instagram and what they think lies beneath the app’s photo-sharing surface.

The 20-minute video lends a perspective to Instagram aficionados and doubters alike, one that reveals the sense of creativity, community, and storytelling that can be experienced through the many snapshots taken that convey love, life, and artistry – because yes, we all have made fun of Instagram, but like it or not, most of its users think there’s something magical about the app.

Prior to making the film, Tellefsen had just rediscovered the greatness of the photo-sharing app. “I signed up for Instagram in 2010 and I didn’t really become an avid user until September of 2012. Cory Staudacher (@withhearts) hosted a meet down in Dallas,” he says. “After participating in my first meet and chatting with Cory, I began to understand Instagram. I was hooked.” His growing fondness for the app over other social media platforms as well as the community that supported it was what drove him to feature Instagram in his project over another service.

Tellefsen believes that the way Instagram builds relationships between users is a model all social networks ought to explore when it comes to community building, since it seems to solidly be based on common interest more than anything else.

When asked about the “theme” of his personal Instagram account, Tellefsen says he defers to his everyday life – a tried-and-tested topic on the app. “There are some of those epic landscape shots, but I try to just live my life and integrate Instagram into it naturally.” He’s says it’s this concept that  has made Instagram more than just an app, more of a real community for him.

“It’s funny how something so digital can create real, analog relationships. The juxtaposition of these concepts is what inspired me to make this documentary.”

One of the most memorable stories Tellefsen came across while filming his documentary is one told by Benito Ferro (@yoyoferro), an origami artist who successfully formed a band off of Instagram. His band Karma Smith, according to Tellefsen, finalized their group name the day Instagram is premiered.

Tellefsen revealed that after finishing his film, he gained a better understanding of the possibility of forging meaningful relationships through the Internet. He also realized that above anything else, Instagram is fun – it shouldn’t be taken too seriously, a lesson he is still personally trying to learn and hopefully pass on to those who see his film.

“I hope to recast the [original] vision of Instagram to its community,” he explains. “The audience is not only Instagram users, but also those outside Instagram. I want [my film] to encourage people to join the platform or change their mind about it.

“Instagram in and of itself is not a way of life, but the effects of Instagram have changed my life and countless others.”

He also mentions that while Instagram is a “come one, come all” platform, just because you use it doesn’t mean you have it. “There are an exponential greater number of people in the world who have access to photography equipment, but just because everyone can take a photo doesn’t make everyone a photographer,” he says, touching on an ongoing industry discussion about Instagram’s place in the photography and art world. “It isn’t the camera that makes the photographer it’s the eye. You either have the eye or you don’t.”

The last goal Tellefsen mentioned is a little harder to execute – there are people who dismiss Instagram as “just another” app, and he wants to challenge that idea. Tellefsen admits that while not everyone will connect with Instagram that way he has, no one should dismiss it until they really try it and engage with the experience.

“Instagram is so much bigger than an app. It’s changing the way we make and sustain relationships. It’s questioning the barrier between analog and digital. Instagram in and of itself is not a way of life, but the effects of Instagram have changed my life and countless others. Even if you don’t agree with the app or like it, take time to understand how it is changing our culture. How do the implications of the application affect me?”

The title of the documentary dares viewers to formulate an opinion on what they think the popular photo app symbolizes, so it has to be asked: What does Tellefsen think Instagram is?

“Instagram is organic. It’s a call away from the fake, plastic, and big business and back to the natural and personal. It’s a kaleidoscope of realities. It’s building relationships with fellow creatives through a common bond. It isn’t the end all be all, but it is affecting this generation, I believe, in an important way that we can’t overlook.”

Topics
What is Twitter Blue and is it worth it?
What is Mastodon? Here’s why everyone’s talking about this Twitter alternative
Twitter’s SMS two-factor authentication is having issues. Here’s how to switch methods
Twitter has reportedly suspended signups for Twitter Blue
How to use Twitter Advanced Search
Twitter to start charging for verification mark, reports say
Having trouble accessing your Instagram account? You’re not alone
Elon Musk considers bringing Vine back from the dead
Staying on Twitter? Here are two ways to make it easier
Elon Musk now Twitter CEO after firing entire board
Twitter Blue is losing Ad Free Articles and Musk’s latest tweets indicate further changes
Clear Mode on TikTok: Here’s what it is and how to use it
Twitter’s edit button could soon be free for all users