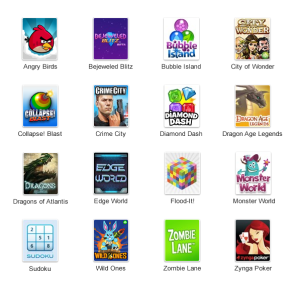 Well that didn’t take very long. Not that anyone thought it would. Google announced today that it is rolling out social games to all of its Plus users.

For many people that announcement will induce a groan: “Not more Cityville updates!”

In order to alleviate those concerns, Vic Gundotra, Senior Vice President of Engineering had the following to say: “We want to make playing games online just as fun, and just as meaningful, as playing in real life. That means giving you control over when you see games, how you play them and with whom you share your experiences. Games in Google+ are there when you want them and gone when you don’t.”

This means Plus will have information, scores and any games available only if you go to the Games page. “Your stream will remain focused on conversations with the people you care about,” Gundotra said.

Provided Google keeps games partitioned in this fashion, the difference is a likely relief to those that were exhausted with ads for Farmville and updates on people’s latest high scores. The Facebook newsfeed has become sacred territory for many users and polluting it with unwanted information has developed into a real sin.

Google also extended the invite to developers looking to create games on their new platform. They provide further information on the Google Plus developer blog

The Games tab is going to be rolling out slowly so don’t fret if it hasn’t appeared at the top of your Plus feed just yet. Considering how much money Facebook and social game giants like Zynga are making, it will soon.

Topics
How to undo reposts on TikTok (and why you should)
Instagram’s new Notes feature rolls out with several others
How to block people on Snapchat
How to post a Short on YouTube
What is Twitter Blue and is it worth it?
Twitter closes offices as ‘work pledge’ deadline passes
What is Ambient Mode on YouTube?
What is BeReal?
How to delete a BeReal post
How to use TikTok’s voice changer
Twitter attempts to sort out verification system with new badges
Hive Social is my favorite Twitter alternative, but that’s not saying much
Elon Musk meets Apple’s Tim Cook to settle dispute