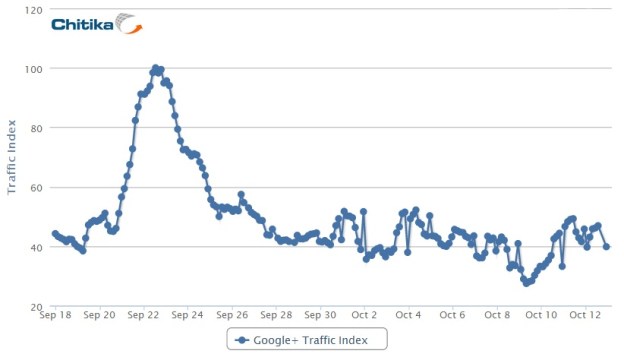 On Monday we reported that Google+ traffic had dipped 60 percent since its public launch on September 20, but traffic might be even lower than first reported. Chitika Insights, the research arm of online ad service Chitika, just released some updated traffic numbers that show Google+ traffic down as much as 70 percent since September 20. Google just announced that Google+ has 40 million users, and that, “People are flocking to Google+ at an incredible rate”. It seems that people might be flocking to the site, but they aren’t nesting.

The report states, “we saw a prolonged and sustained downward trend in overall activity coming from the site. At its greatest, the gap between peak and trough measured over a 70% decline in traffic. No one can know for sure why Google+ isn’t able to keep people coming back to the site, but there are plenty of people who think they know why traffic is slipping.

Unfortunately for Google one person who weighed in on the subject was one of their own engineers, Steve Yegge. Yegge’s blog post outlines the key reasons he feels that Google+ isn’t meeting expectations. The main reasons Yegge cites is that Google+ wasn’t launched with an API, and because Google+ does not have enough ways for users to waste their time on the site. Facebook has all sorts of applications that draw people to the site, and even if people do not want to be social they will still come to Facebook to check on their farm in Farmville. It seems as though Google+ is slowly adding the features that Yegge would like to see, and hopefully over time Google+ will see an increase in return visitors.

With 40 million users Google+ is clearly on the right track, and we all know Google isn’t going to give up on the product so it will keep growing. The real question becomes how long will it take before it really starts to rival Facebook?

How to change your YouTube name
The most common Google Hangouts problems and how to fix them
How to run a free background check
How to download Twitter videos
Snapchat is down right now. Here’s what we know
The more Instagram copies TikTok, the more I hate using it
Elon Musk hints that he could start his own social media platform
Facebook Messenger finally starts testing end-to-end encryption for all chats
What does a check mark mean on Facebook Messenger?
Twitter’s latest features are all about curbing election misinformation
Snapchat Plus subscribers are getting these four new features today
You can (sort of) generate art like Dall-E with TikTok’s latest filter
You can now use the Add Yours sticker on Reels for Facebook and Instagram