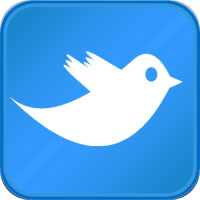 Does it feel like it’s been a lot longer to anyone else? Twitter turns five years old today, and while we’ve already taken a look at some of the awe-inducing numbers the micro-blogging site has been able to churn out, we also decided to take a quick look at some of the more amusing and astounding 140 character memos we’ve been privileged enough to glimpse before they vanish into infinite abyss of the Twitter feed.

#2 As Egypt was thrown into revolutionary chaos, a tweet from Google exec Wael Ghonim reading “Pray for #Egypt. Very worried as it seems that government is planning a war crime tomorrow against people. We are all ready to die #Jan25” aroused concern for his state and drew the attention of millions to the violence-ravaged nation.

#3 Ashton Kutcher and Demi Moore are two extremely well-known Tweeters, and (in some humble opinions…) two of the most annoying. But Moore used her celebrity for good via the site when one user threatened suicide and her quick response and retweet led to authorities contacting the original tweeter.

#4 Social media has officially gone universal, and Astronaut TJ Creamer was responsible for the first tweet sent from the International Space Station. We were also treated to some Twitpics, a giant step in bringing outer space to the masses.

#5 When Kanye West opened a Twitter account, we knew it was destined for greatness. The two are a match made in heaven and his tweets need no explanation. It’s difficult to choose a favorite, but there’s something about his frustration over cherubic tapestries that is endlessly amusing.

Elon Musk reveals date for Twitter Blue relaunch
What is Mastodon? Here’s why everyone’s talking about this Twitter alternative
Twitter’s SMS two-factor authentication is having issues. Here’s how to switch methods
Twitter has reportedly suspended signups for Twitter Blue
What do the eyes mean on your Snapchat Story?
Elon Musk finally in charge of Twitter, reports say
Elon Musk officially owns Twitter now: a timeline of how we got here
How to use Twitter Advanced Search
Twitter to start charging for verification mark, reports say
Having trouble accessing your Instagram account? You’re not alone
Elon Musk considers bringing Vine back from the dead
Staying on Twitter? Here are two ways to make it easier
Elon Musk now Twitter CEO after firing entire board