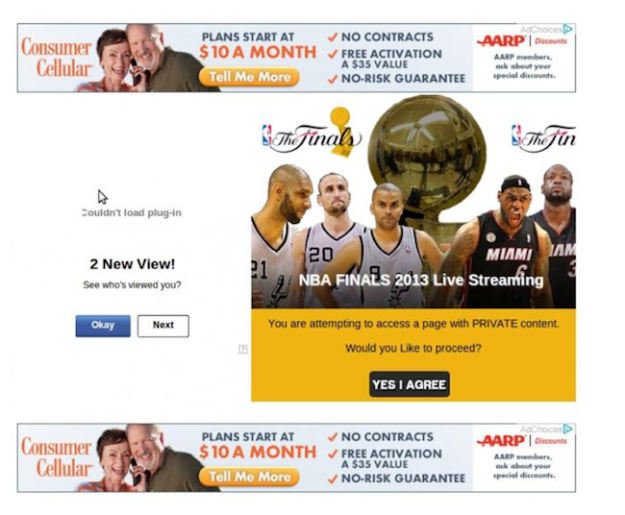 It’s NBA finals season, and lots of people want to watch the games by streaming them online. So scammers are taking advantage of this and sending out malicious fake links on social media – links that lead to nowhere good, and certainly not to glorious footage of dunks, rebounds, and Tony Parker.

Here’s what to look out for, according to security software company Symantec. If you’re on Facebook, you might see a page pop up on your Feed offering a live stream. This kind of page will send you to another advertisement for a live stream hosted by Tumblr. Once you go there, if you click “YES I AGREE,” you’ll be re-routed back to Facebook, where a series of permission requests will pop up.

Now, at this point, alarm bells should be going off, but so many third-party applications ask for this kind of permission that it’s easy to understand how NBA fans might think things are on the right track. But after the first permission request, which asks for access to your friend list, profile, and email address, the additional permissions ask to post on your behalf and to manage your pages – and as Symantec noted, these requests “do not make any sense for an application to have in order to enjoy free live streaming, such as access to manage your Facebook pages.”

If you agree, the application will install, and then send you back to Tumblr and encourage you to spread the word about the live stream – which helps spread the scam further. And at the end of everything, guess what you get? If you guessed “a functioning livestream of the NBA finals,” you haven’t been paying attention. You get a broken video player, and if you click on it you’ll get sent to a page where the scammers make money through affiliate links.

Oh, and even after you realize you’ve been shafted, you’ll still have to deal with the scam, because it will start posting links to the fake stream on your Facebook wall. This will probably convince some of your friends to click on it and perpetuate the problem, and it will cause the more savvy ones to shake their heads and wonder when you’re going to learn.

This sort of scam is nothing new; a similar scheme involving a fake Rihanna sex tape recently hoodwinked Facebook users, and that’s just one of the most recent among many more. It’s tricky because Facebook scammers have an advantage over traditional scammers; because you see something that a friend posted, you assume it’s genuine content and not malware.

To be safe, avoid clicking links to any streaming video and any seemingly exclusive or titillating video links posted. If you really want to check out whatever’s up there, just Google it to ensure it’s not a scam.

And just follow our tips if you want to watch the NBA Finals and you don’t have a TV.

Topics
Twitter to start layoffs on Friday, internal email reveals
Instagram to soon let creators make NFTs and sell them to fans
Twitter Blue is losing Ad Free Articles and Musk’s latest tweets indicate further changes
Having trouble accessing your Instagram account? You’re not alone
Elon Musk officially owns Twitter now: a timeline of how we got here
How to use Twitter Advanced Search
Twitter to start charging for verification mark, reports say
Elon Musk considers bringing Vine back from the dead
Staying on Twitter? Here are two ways to make it easier
Elon Musk now Twitter CEO after firing entire board
Clear Mode on TikTok: Here’s what it is and how to use it
Twitter’s edit button could soon be free for all users
Elon Musk to cut half of Twitter workforce, report says