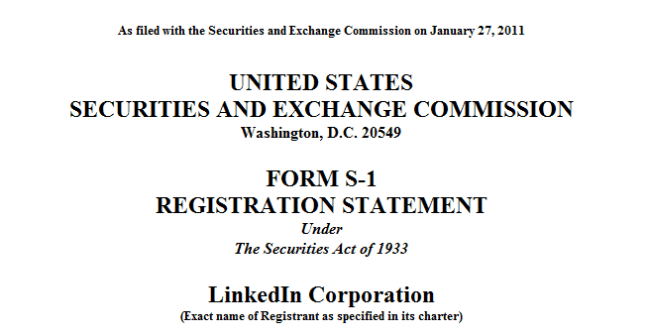 IPO rumors have been surrounding LinkedIn for awhile, and now the professional social network has filed for an initial public offering with the SEC. The offering is being led by investment firms Morgan Stanley, Bank of America Merrill Lynch, and J.P. Morgan Chase, which all courted the company earlier this year as it took sought advisors on going public.

According to its S-1 form, LinkedIn revealed its net revenue for the first nine months of 2010 was an impressive $161 million, and it managed to earn a profit of $10 million. Compare that to 2009, when it raked in $3.4 million. Despite the monumental increase, the company admitted that “We expect our revenue growth rate to decline, and as we continue to invest for future growth, we do not expect to be profitable on a GAAP [U.S. accounting standards] basis in 2011.”

While it may not expect to stay in the black, the site’s members are growing at astounding rates. Earlier this year, LinkedIn reported that it was growing at a member a second, and today has more than 90 million registered accounts.

It’s been widely thought that LinkedIn would file to go public this year, and additions to its board as well as careful selection of financial underwriters were less-than-subtle indications. Facebook’s own 2012 IPO aspirations have also been a factor in LinkedIn’s own process, as one insider told Reuters, “If Facebook went public before LinkedIn, do you think anyone would pay attention to LinkedIn?”

No official numbers have been released yet, but an insider told The Wall Street Journal that LinkedIn expects to pocket $200 million in its IPO, which would boost its valuated around $2 billion. LinkedIn can be considered the first social network IPO, at least stateside (German site XING filed its initial public offering in 2005), unless you see Google as a social network (we don’t – especially not when it went public). This could trigger the various social tech companies rumored to be ready to file.

Here are few items worth mentioning LinkedIn publicly disclosed in its S-1 form:

Study: Facebook is skimping on moderation, and it’s harming the public

LinkedIn reportedly used by some nations to recruit spies

Localblox data breach is the latest nightmare for Facebook, LinkedIn