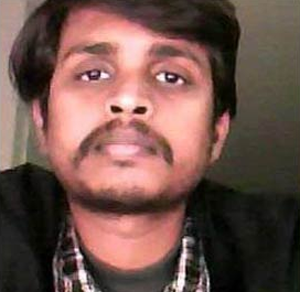 In what could be considered one of the most perfect instances of poetic justice in the digital age, Mark Zuckerberg has his very own Facebook stalker — one so serious, he’s had to file a restraining order against the man.

According to a report by TMZ, the Facebook CEO has filed a restraining order against 31-year-old Pradeep Manukonda, who, according to legal papers, has attempted to “follow, surveil and contact Mr. Zuckerberg using language threatening his personal safety.”

Manukonda has tried to contact Zuckerberg on numerous occasions. On January 24, he was reportedly intercepted by “Facebook security” at Zuckerberg’s home, “just as he was about to walk up the front steps,” says TMZ.

After that, the police say they gave Manukonda a verbal warning — which Zuckerberg says he entirely disregarded. According to a legal report, the man tried to contact him via snail mail, and sent him flowers, along with a hand-written letter (PDF), on January 28.

Manukonda also took to Facebook in an attempt to get Zuckerberg to talk to him — by posting a disturbing message, which included choice phrases like, “Please understand my pain,’ and “I am ready to die for you,” to Mark’s sister Randi Zuckerberg’s Facebook Wall on December 22.

The restraining order requires Manukonda stay at least 300 yards away from Mark, Randi, and Mark’s long-term girlfriend, Priscilla Chan, who was also contacted by the man, until a trial later this month.

Manukonda has responded to the restraining order, telling TMZ that, he’s “a peaceful guy … I’m sorry he thought I was trying to harm him.” He continued, “I understand he’s a busy man … I’ll respect his privacy.”

Stalkers are, of course, no laughing matter —even if they are awesomely named Manukonda. But forgive us for finding at least a drop of irony in learning that Mark Zuckerberg — a man who has been questioned repeatedly by members of Congress about his company’s intrusions into its members’ privacy — is forced to retreat behind the one curtain of seclusion we still have left: The law.

Topics
Three reasons Facebook/Meta is shutting down its face recognition system
Facebook about to rebrand under a new name, report claims
Elon Musk advises people to ditch Facebook and use Signal
Facebook expands its ban on QAnon conspiracy theory accounts
What is Mastodon? Here’s why everyone’s talking about this Twitter alternative
Elon Musk reveals date for Twitter Blue relaunch
What is Twitter Blue and is it worth it?
Twitter closes offices as ‘work pledge’ deadline passes
What is Ambient Mode on YouTube?
What is BeReal?
How to delete a BeReal post
How to use TikTok’s voice changer
Twitter attempts to sort out verification system with new badges