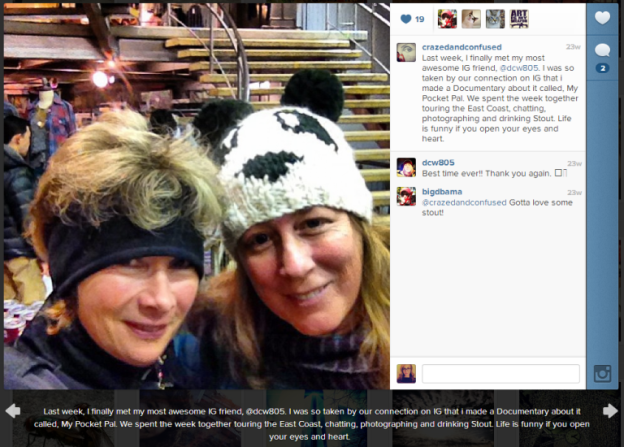 You see their most intimate photos every day; what they’re eating, who’re they’re with, what they’re seeing. It can feel like you really know your Instagram community, and that they really know you – but of course, these are just shallow glimpses into who these people actually are. But what if you dug deeper, and tried to find out more – beyond the sunset photos and filtered selfies?

A new documentary, My Pocket Pal, explores that exact question. It chronicles the relationship one user, Jean Antolini, created with a fellow user; one she never actually met in person for the first three months of their friendship.

“She really had an eye for the minute,” Antolini explains when asked what about the user that went by @DCW805 grabbed her attention. “She could make little, little things look so beautiful. That’s really someone who really focuses in the details, and she just had a lot of close-up.”

She understood @DCW805’s art instantly and the Instagram photos resonated … or so she thought. “I felt like this is someone who feels too much, feels the pain around her and everyone.”

She reached out to @DCW805 initially through comments, and initially there wasn’t much dialogue shared between the two – as every Instagram aficionado knows, the platform isn’t really built for text-based communication.

Antolini stops for a second and then recalls the first time that Dorothy (@DCW805) offered her phone number. A simple, “Here’s my phone number, if you ever want to text me,” was all she had to offer.

“Then it turned into a dialogue that I found fascinating,” she says. ”It was so fascinating that I actually started to screen save the texts that we were corresponding with,” she recalls. Antolini’s first text response – fitting of her self-described chatty nature – was “I hope you have an unlimited plan.”

Coincidentally Antolini was taking a documentary film class at the WHYY Philadelphia National Public Radio at the Doris H. Hamilton Public Media Commons where students learned to create six-minute documentaries. Faced with a final project, and realizing that this social network relationship was the only subject she could think of, she turned her camera on her budding Instagram friendship with Dorothy.

“It started out about Instagram, and then it became about her.”

If you take a look at @DCW805’s earlier photos, before Antolini and she met in September, her feed is filled – as Antolini described – with meticulously shot close-up photos of nature, from swans and geckos, to sea glass and the peace symbol inscribed on the beach. But what really stands out amid her photos is what you actually don’t see.

“I was confused as to why there were no photos of herself in her feed when we first started corresponding,” says Antolini. Antolini, who goes by @crazedandconfused is the polar opposite with plenty of photos to show of herself.

It took time to knock down the walls to get @DCW805 to open up. In peeling back the layers, she discovered just why her Instagram friend was so closed up. “I found out that she had a few issues with her physical self. So it took a lot of trust, correspondence for her to finally reveal herself.”

This isn’t the first story we’ve heard of Instagram creating real life bonds – but it’s still incredibly fascinating to watch @DCW805 evolve via Instagram with the help of her new friends: You begin to see her opening up with a self portrait in November, and a photo of the friends together in December.

Antolini points out that it wasn’t really her intention to get her friend to reveal herself – it just happened.

“It was like peeling an onion. There were many layers to why she wouldn’t reveal her personal and physical self. And then once she did, she was like ‘I can fly!’” Antolini explains. She’s very freewheeling with herself now.”

The friendship and Dorothy’s own personal changes don’t just have Instagram to thank – it all jumped from platform to platform. It started on Instagram, and then texting was involved, then they started to try leaving voice memos via the iPhone, until they got to sharing short video snippets. “I have a huge cache of little Viddy’s we’d shoot,” says Antolini. What’s intriguing, she explains when thinking back on the videos was that Dorothy never showed her face, “ever.”

Even without revealing each other’s face on video, the duo got by. I asked Antolini what exactly they’d end up shooting, and she tells me that she’d often ask Dorothy to “show me what you’re looking at right now.” Antolini would shoot what she was looking at, and Dorothy would do the same. “[The relationship] evolved through trust. I could see what she was doing, what her surroundings looked like (because I never have been to the coast).”

“When I knew her story, and bits of her work, and I saw it differently,” Antolini explains after the moment that Dorothy had opened up about her personal life and struggles.

That moment of clarity between the two friends – a friendship that had been struck up online and remained online for the better part of three months – didn’t happen until Dorothy ended up flying over to the East Coast to meet with Antolini for the first time in person on December 25. Fortunately, @DCW805 was exactly the same person that she’d come to enjoy the company of, and Antolini confides how grateful she was that Dorothy was so honest and true to how she portrayed herself, even if the friendship was struck up online.

But looking back on @DCW805’s Instagram feed, Antolinin says it’s like hitting start all over again. “I had a fresh eye with her photography when I knew some of the journeys in her life,” she explains.

The film premiered at the Resorts Casino in Atlantic City on June 6, and Antolini is in the process of submitting her documentary to film festivals.

Private gun sales are now banned on Facebook, Instagram
Kendall Jenner and her fellow Instagram models are earning up to $300K per post
These are the most Instagrammed Halloween costumes
Myspace founder Tom Anderson’s two-year-old selfie is just now getting attention
Elon Musk officially owns Twitter now: a timeline of how we got here
How to use Twitter Advanced Search
Twitter to start charging for verification mark, reports say
Having trouble accessing your Instagram account? You’re not alone
Elon Musk considers bringing Vine back from the dead
Staying on Twitter? Here are two ways to make it easier
Elon Musk now Twitter CEO after firing entire board
Twitter Blue is losing Ad Free Articles and Musk’s latest tweets indicate further changes
Clear Mode on TikTok: Here’s what it is and how to use it