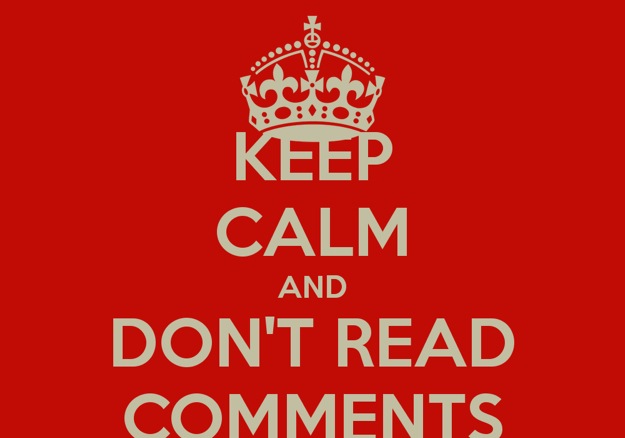 We wouldn’t be surprised if the now-ubiquitous advice, “Don’t read the comments,” was likely first uttered soon after online readers were given the ability to leave notes at the end of blog posts, news stories, or whatever online content that they were watching or reading on the Internet (those four words of conventional wisdom even has its own dedicated Twitter feed.) Now, however, there is empirical evidence suggesting that reading the comments can actually affect the way that you understand the original story.

Dominique Brossard and Dietram A. Scheufele, two professors of science communication at the University of Wisconsin, Madison, carried out a study in which 1,183 volunteers were asked to read one of two versions of a fictional online news story about a new technology called nanosilver – half of those surveyed were asked to read the story followed by civil comments, while the other half read the same story with more aggressively argumentative comments – and then answer a questionnaire about what they had just read.

“The results were both surprising and disturbing,” Brossard and Scheufele wrote in a New York Times op-ed piece about the experiment. “Uncivil comments not only polarized readers, but they often changed a participant’s interpretation of the news story itself.” The researchers called it “the nasty effect.”

According to Brossard and Scheufele’s findings, the “civil” group’s reaction to the fictional story remained unchanged from their initial take on the subject after reading the comments, but the same couldn’t be said of those who read the version with ruder comments. “Those exposed to rude comments, however, ended up with a much more polarized understanding of the risks connected with the technology,” the scientists explained. “Simply including an ad hominem attack in a reader comment was enough to make study participants think the downside of the reported technology was greater than they’d previously thought.”

While this may seem like a problem with an easy solution – simply ban offensive or outrageous comments that are likely to have such an effect on the reader – the execution of that solution is inevitably more difficult, especially considering that what does and doesn’t constitute offensive or rude commentary is subjective.

This is, of course, just one study that only roughly 1,200 volunteers participated in, and could therefore be argued against by anyone attempting to make the case for the value of a comments section. Nonetheless, those who argue against reading the comments will have even more reason to do so, especially if we see more studies of this nature carried out – presuming, of course, you’d rather your information sources tended to be fair and balanced.

Twitter may let you select who can reply to your tweets
WhatsApp has 400 million users in India, but no fix for its fake news problem
Facebook’s comment-ranking system aimed at taming the dumpster fire
Facebook tries to demystify your news feed with built-in transparency tool
TikTok bans influencers from creating paid political ads
The 10 most popular TikTok accounts
Downloaded YouTube Shorts clips will soon include watermarks
Snap’s Pixy drone flies off into the sunset as it’s reportedly canceled
How to half swipe on Snapchat
YouTube is finally getting serious about podcasts
Breaking down the Twitter whistleblower allegations and how it affects the Musk takeover
Snapchat may owe you money just for using filters — here’s how to get paid
TikTok’s experimental third feed has been spotted out in the wild