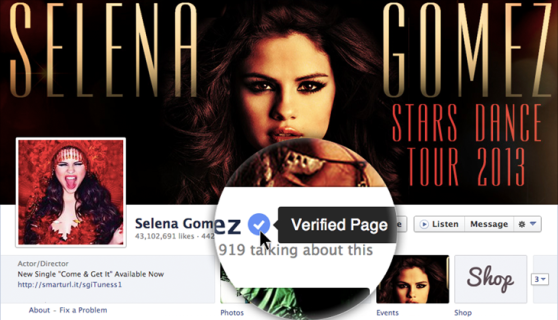 Facebook is taking quite a few cues from Twitter these days. They’re introducing hashtags, and Mark Zuckerberg recently said he wanted to make Facebook more like a “personalized newspaper” – which is pretty much what Twitter is. And now Facebook is Twitterifying itself even more by introducing blue verification checkmarks for celebrity users.

People go nuts for verification checkmarks on Twitter, which is why there are so many fake accounts promising the badge. But Twitter will usually proactively invite people it deems worthy of verification, and there’s no way for the average Twitter user to request the coveted sky-blue badge.

Like the less-hip kid on the playground futilely mimicking the popular girls with all the right accessories, Facebook is trailing after Twitter once again by introducing basically the same exact damn thing, only worse. “Today we’re launching verified Pages to help people find the authentic accounts of celebrities and other high-profile people and businesses on Facebook,” the Facebook blog announced. Hm, remind you of anything? Probably Twitter’s criteria for verification: “We concentrate on highly sought users in music, acting, fashion, government, politics, religion, journalism, media, advertising, business, and other key interest areas. We verify business partners from time to time and individuals at high risk of impersonation.”

Facebook proactively placed very familiar-looking blue checkmarks next to some big name stars, like Selena Gomez, Justin Bieber, Justin Timberlake, and Britney Spears. Their process for choosing who gets verified isn’t clear (sound familiar?), but mega-celebrities need not apply yet; to give you an idea of who hasn’t made the cut, much-loved but lesser known musicians like Grimes and Arcade Fire haven’t been blessed with the blue checks as of today. A quick run-through of some of a few famous types might give you an idea who is verification worthy: Lady Gaga and Miley Cyrus are both verified; Kim and Kourtney Kardashian made the list, but Khloe did not; Roger Federer is verified; however the late Roger Ebert wasn’t on the list. It seems like Facebook decided to prioritize pop musicians, reality stars, and athletes in this first round.

It doesn’t seem like follower counts have much to do with the roll out; while J.K Rowling’s page has more “likes” than Bill Clinton’s, the former President’s page is verified while Rowling’s is not.

Since Facebook’s roster of verified accounts is so small, people who aren’t celebrities don’t stand much of a chance at getting a blue badge – though if you think you’re being impersonated, you can still always report a fake account.

Topics
You can now downvote comments on TikTok videos
YouTube is finally getting serious about podcasts
You can now use the Add Yours sticker on Reels for Facebook and Instagram
What does a check mark mean on Facebook Messenger?
TikTok is launching a dedicated gaming channel
What do the eyes mean on your Snapchat Story?
Elon Musk finally in charge of Twitter, reports say
Elon Musk officially owns Twitter now: a timeline of how we got here
How to use Twitter Advanced Search
Twitter to start charging for verification mark, reports say
Having trouble accessing your Instagram account? You’re not alone
Elon Musk considers bringing Vine back from the dead
Staying on Twitter? Here are two ways to make it easier