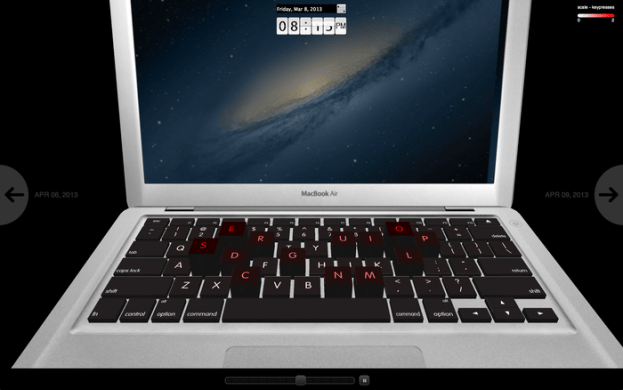 Data brokers are scrounging for every trace of your Internet trail to compile detailed profiles and sell them to companies who want to make targeted ads. It’s an extremely lucrative industry, and one that we, the data providers, don’t make a dime from – even though it’s our information that’s so valuable.

Federico Zannier is looking to disrupt this system, and he took to Kickstarter to start a project where he sells his own data in daily chunks. Zannier is a grad student at NYU with a background as a consultant for Accenture and Web app development, and he sees something fundamentally wrong with the way data brokers diminish our ability to profit from our own data records. As he explained in his video, ad revenue for these kinds of data sales racked up $30 billion in 2012, and he thinks the people behind the data should get a slice of the profit.

He’s experimenting with selling his own data himself in bundles worth $2. This includes GPS details, the position of his mouse, Web history, photographs, and more. He’s already exceeded his goal of $500 and is well on his way toward $1,000 – but does he think this experiment has a real chance of turning continued profit, or is this mostly a ploy to draw attention to the problem?

“I’m not sure which laws need to changed, but a good first step would be making Privacy Policies more human-readable,” Zannier tells us. “I think that collecting too much information is overwhelming and expensive. I think it’s easier if we, as users, could control our data and help make the services better. Sometimes the data they have just isn’t even good – this kind of a self-reporting project could help with accuracy as well.”

So does he want to make some money off his data, or is really about the principle of the thing? “I’m mostly interested in subjecting myself to the process so we can all learn from it. How much data is really being collected? The profit side of it is mostly provocation – but I wouldn’t mind a couple bucks so I can make the app even better.”

And Zannier is no stranger to the lure of data collecting. “To be honest, it is very helpful from a corporate standpoint. I’ve certainly been a part of that system. But as a user, I feel a little bit differently. I have to think there’s a sweet spot in the middle where both sides can benefit and be a little more human.”

Zannier’s project comes at a time when it’s more important than ever to take notice of the data brokerage industry. This month, the FTC sent warnings to ten major data collecting companies for potential privacy violations – but for every company receiving a warning, there are many more barreling on unimpeded. Many people using the Internet have no idea exactly how vast and thorough their data files are, or how valuable they are to companies willing to pay to see their consumer profile. Zannier’s campaign might not make him a lot of money, but it certainly makes the argument for having control (and possibly profit) off of your own information.

Topics
How to use Twitter Advanced Search
YouTube brings pinch to zoom and video navigation changes to everyone
How to create multiple profiles for your Facebook account
Instagram’s expanded blocking lets you block a person’s backup accounts
What do the eyes mean on your Snapchat Story?
Elon Musk finally in charge of Twitter, reports say
Elon Musk officially owns Twitter now: a timeline of how we got here
Twitter to start charging for verification mark, reports say
Having trouble accessing your Instagram account? You’re not alone
Elon Musk considers bringing Vine back from the dead
Staying on Twitter? Here are two ways to make it easier
Elon Musk now Twitter CEO after firing entire board
Twitter Blue is losing Ad Free Articles and Musk’s latest tweets indicate further changes