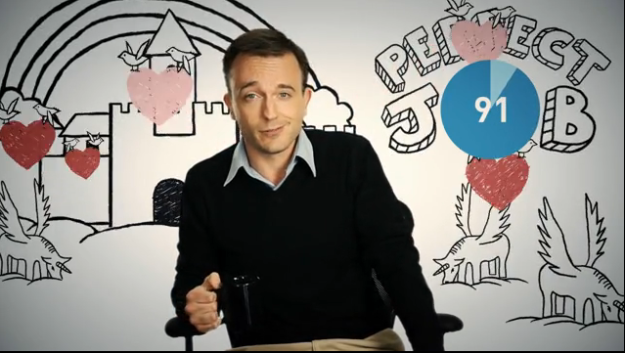 To just about everyone’s delight, this whole job hunting thing is getting easier. It’s been a slow evolution, however, staying fairly stagnant since the launch of LinkedIn, until very recently.

The next startup to throw its hat in the ring is Path.to, not to be confused with mobile social network Path. It’s the brainchild of founder and CEO Darren Bounds, and was launched this past April and billed as “the eHarmony of jobs.” After adding or creating a resume using the site and offering some input on your skills and job requirements, you’re matched up with companies that have listed positions and assigned a score for how well you match a particular role.

At launch, Path.to was only available in the Bay Area, where there is plenty of action for the jobs and job seekers the app is hoping to connect – those in the tech and digital design sector. But Path.to’s physical reach has expanded, now including New York, Chicago, and Boston.

Mysteriously missing from that list is Path.to’s own home, Jacksonville, FL. I recently spoke with Bounds about the startups recent expansion and asked why the currently hiring company can’t use its own site to find prospective employees. “In order to rank a person’s suitability for a role we have to have a good understanding of the geography and we need to know the surrounding cities and how far they are from a position,” he says. “We need to know what the commute is like, so geography plays a role in our scoring system. That’s why we’re taking our time iterating into new markets, so that we really understand everything about them, including location.”

In addition to hitting new cities, Path.to revealed a set of new features for employers and hopeful candidates as well. Users can now add their portfolios to their Path.to profiles, connecting their GitHub, Forrst, Dribble, and Behance accounts to visually present work they’ve done. And businesses are able to flesh out their own profiles by adding video, photos, positions they’re trying to fill, and asking current employees to offer testimony about the work environment (they can provide this feedback whether they have an account or not).

Recommendations and a Pandora-like learning element are also part of the Path.to experience. As with LinkedIn, users can request recommendations to help attract some positive attention, but they’re weighted — your colleague’s kind words will mean more than your mom’s. Liking or disliking positions Path.to shows you will help it learn what you’re looking for, a mechanism that applies to employers using the site as well.

It’s an incredibly full-featured, immersive application tailored for tech and digital design jobs – and at the moment, it’s going to stay that way. “For us to do our job really well, we need to have more than a resume to measure,” says Bounds. “We’d have to find jobs beyond tech that have signals that we can use to inform our scoring system – and right now we’re not looking beyond technology, but when and if we do it will be because we’ve identified some signal we can capture.”

For job hunters lucky enough to fall into Path.to’s crosshairs, the options are plentiful, and quite good. The likes of Evernote, Lytro, Vimeo, Livestream, and Quora are just a few of the 300 businesses using Path.to to find new hires. And this is where Path.to’s path to (say that three times fast) revenue lies. Bounds tells me the application will eventually monetize job postings, making them free for 30 days for businesses and then introducing them to a pay-per-post model. It will cost $400 to post a position for 30 days, and then to extend it another 30 days will be discounted by 50 percent. While that might make Craigslist look cheap, Bounds believes it’s actually a small price to pay for what could eventually replace tech job recruiters. “The last resort of a business is hiring a recruiter – say you hire a software engineer for $100,000 a year. The recruiter cost you $20,000,” he says.

I asked Bounds why he thinks we’re suddenly seeing such inspired innovation in job hunting apps. He reasons that while LinkedIn in gave us a platform to connect professionally, it never became a means for direct hiring. This combined with the ubiquity of social media and the daunting task of finding talented developers, designers, and engineers has made the sophisticated career tool a hot commodity.

LinkedIn reportedly used by some nations to recruit spies