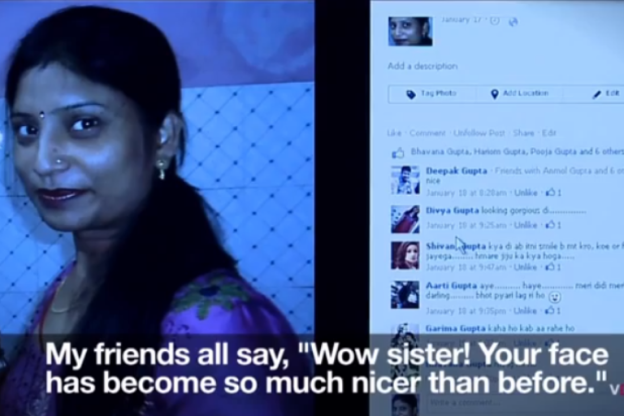 People have augmented their appearances in all sorts of messed up, creative ways ever since the invention of the mirror. Extreme elective surgery to contort the human body into a closer approximation of an impossible ideal has gone on for thousand of years – and your standard Los Angeles mammoplasty these days looks positively relaxing compared to the prolonged, chronic torture of T’ang Dynasty foot binding. Suffice it to say we’ve always taken the whole beauty thing way, way too far.

It’s been this way for what feels like ever, so you can’t cast too rosy a nostalgic glance at the past and forget that we’ve always been vain and borderline crazy when it comes to altering our appearances. But now the Internet is causing us to take it to new levels of insanity.

While people are still showing up at doctors’ offices with the very human dream of looking beautiful, but now they’re being more specific: They want to look beautiful online. Instead of wanting to look beautiful on the beach, at our weddings, or to feel more confident in interviews, now we want as many online admirers who are compelled to click “like” at the sight of our profile pictures.

People are starting to visit plastic surgeons with complaints of how they look in photos their friends tag, wanting a smoother chin-line or higher cheekbones so that the onslaught of random and tagged Facebook and Instagram photos won’t betray them.

Prospective patient complaints extend to video as well. When you’re back at home Skyping, you don’t want to be distracted by that small box featuring your face in the corner … but you just can’t help it.

This kind of thinking is producing demand for cosmetic procedures that make sure you look good in the digital world. Since people tend to have the camera point up when they Skype or FaceTime on their phone, it’s not a very flattering angle for chins. This is one of the reasons why plastic surgeons have seen an increase in surgeries to improve how the lower half of the face looks, with one Texas-based plastic surgeon named Dr. Robert K. Sigal inventing a special procedure called the “FaceTime Facelift.” If you’re thinking “why don’t people just reposition their cameras?” you’re underestimating the complex that the Internet is giving us: There’s even a Facebook app where you can ask if you need certain plastic surgery procedures and get crowd-sourced answers.

Dr. Sigal isn’t alone. Dr. Richard Ellenbogen, a high-end plastic surgeon in L.A., told plastic surgery review site RealSelf about how our digital lives impact our plastic surgery requests. “Internet dating and Facebook dating has really changed how people approach what they want to look like. People come in and show me their Facebook pictures, and ask what they can do to look hotter, and we work backwards from that. I use computer software to show them what they’re going to look like, and to make sure they don’t look stupid.”

The American Academy of Facial Plastic and Reconstructive Surgery released a study in March that corroborates the stories of individual surgeons. The study looks at a survey of plastic surgeons, and found a 31 percent increase in social media-inspired surgeries inspired.

Cutting open your face to make it look better in a 2D online image seems like the folly of unmitigated narcissists who don’t know how to use Photoshop.

Dr. Malcolm Z. Roth, former President of the American Society of Plastic Surgeons, has witnessed this increase. “Skype, FaceTime, and other live talk features on digital devices have led to more consultations and procedures.  People are now seeing their faces as others see them in real time, and they often do not like what they see,” he says. “People are noticing their jowels, necks, and wrinkles.  When we look in the mirror, we often instinctively tilt our heads in a way that minimizes the tell-tale signs of aging.  When you are having a conversation, facial expressions and animation make those unwanted ‘imperfections’ come alive. Neurotoxins, fillers, laser procedures as well as neck and face lifts and eyelid tucks are being requested by these ‘social’ individuals.”

“Facebook facelifts are not exactly facelifts, they are relatively minor procedures that people in their twenties and thirties get done to improve their pictures on the social media,” explains Dr. Ajay Kashyap.

The question is why are we turning to these expensive, painful, permanent efforts? Deciding to actually cut open your face to make it look better in a 2D online image seems like the folly of unmitigated narcissists who don’t know how to use Photoshop. We can manipulate how we look in photos and in videos far more easily than we can in real life, so it seems counter-intuitive that people are so willing to undergo surgery to ensure they look their online best.

But if you accept the premise that plastic surgery for cosmetic enhancement is a reasonable way to improve someone’s looks, then the logic of these Internet-based procedures isn’t that outlandish. As more and more people snap photos and share them on Facebook and Instagram, and as video-chats become a primary form of communication, the amount of time your digital image is front and center increases exponentially.

And what’s more, you’re no longer in control of it; someone can tag a photo of you that you hate, and even though you can untag it, the picture will likely remain on the Internet. The increase in surgeries to ensure digital beauty makes sense when you consider how quickly people are losing control over what images of them wind up online and in public view.

The Facebook facelift trend in India has a lot to do with the fact that the people participating in it view Facebook as a dating site. They are trying to put their best face forward for potential love connections. And as online dating continues to expand into one of the primary ways people meet each other, the pressure to have a camera-ready face is also growing. When you have seemingly unlimited dating options online, it becomes easier to judge people on superficial grounds, and this plastic surgery trend underlines how people are trying to adapt in a new, more cutthroat romantic atmosphere. It may seem silly or vain to get a cosmetic procedure in order to look better online, but when you consider that people do judge their potential mates on how good they look in profile pictures, it’s hard not to be sympathetic.

While the AAFPRS research makes it clear that social media does influence plastic surgery decisions, the study found that people are actually relying on places like Facebook less to find plastic surgeons, choosing to go with referrals and research instead of clicking on ads within social networks. So even though people continue to use social media as an impetus for procedures, they’re doing some more “manual” legwork to find a doctor.

Dr. Roth believes the trend towards plastic surgery to keep up appearances isn’t going anywhere. “Having plastic surgery has become more acceptable, and the public has learned that when it is performed by board certified plastic surgeons, it is usually very safe.  Since we’re now seeing more people in the public eye that have had plastic surgery without looking like they had it, patients have realized that if they do their homework and go to the right surgeon, they have an excellent chance of having a nice result, often with minimal or no down time,” he says.

“In the down economy of the past few years, many people who never thought they would consider it are having plastic surgery to look more youthful and energetic, either to keep their jobs or to rejoin the work force.”

As long as social media profile pictures are used as a way to make a first impression on an employer or a lover, it looks like plastic surgery to keep these digital avatars looking sharp will also persist, no matter how advanced Photoshop gets – people don’t want to see disappointment in the eyes of an online associate when they meet in person for the first time.

Topics
How to go live on Facebook
You can now download Facebook’s Messenger app to your desktop
Digital Trends Live: Facebook’s off-activity tool, Super Bowl players talk tech
New Facebook Messenger stickers will open conversations about mental health
What is Mastodon? Here’s why everyone’s talking about this Twitter alternative
Elon Musk reveals date for Twitter Blue relaunch
What is Twitter Blue and is it worth it?
Twitter closes offices as ‘work pledge’ deadline passes
What is Ambient Mode on YouTube?
What is BeReal?
How to delete a BeReal post
How to use TikTok’s voice changer
Twitter attempts to sort out verification system with new badges